Walking through the valley with community

By: Mark Peterson and Kenzie O'Keefe (for North News)

Though their religions are different, Imam Makram El-Amin (MEA) and Rev. Linda Koelman (LK) share a devotion to North Minneapolis. Both have been there for years. El-Amin attended North High and has been the Imam at Masjid An-Nur since 1996. Koelman was appointed to North United Methodist Church two decades ago. Their leadership is inclusive and comprehensive, stretching far beyond the walls of his mosque and her church. Both are current Minneapolis Police Department community chaplains. In their own ways, they comfort community members in some of the darkest, most grief-stricken moments of their lives.

What has kept you in North Minneapolis?

LK: If we want to move, we can request reassignment, but I never have. My husband and I bought a house six blocks down the street from the church. This is my community. It’s home.

MEA: I’ve grown up here, and it’s where I choose to live. My wife and I and my children lived in Brooklyn Center and Brooklyn Park, but we chose to come back to the city. We felt more comfortable here – it’s where we had lived, worked, played and prayed. It’s where I feel I can make the greatest impact.

I imagine you’ve seen sides of North Minneapolis that many have not. What have you learned through your experiences here?

LK: So much of the dark stuff that I’ve seen here is universal; it’s not specific to North. Everywhere you go in the world there are grieving people, people are involved in violence, and innocent family members and friends who are going to miss them.

MEA: I grew up in North Minneapolis with a great sense of community, where people cared for each other. We weren’t strangers to each other. That sense of community is really what motivates me even today when it comes to my work and how I approach it. In the midst of a lot of challenges and struggles that this community has had, the world should know about the remarkable people that have come from this.

What does your role as a police chaplain entail?

LK: We go to promotional and awards ceremonies for MPD officers. We do a four-hour ride along every month. We get emergency calls. We go to community meetings. Sometimes we will be with a family after a welfare check. We get calls when people die far away and a family member in Minneapolis needs to be notified. It’s more compassionate to have a chaplain come in person. We’re called to help people through sorrow and death. In chaplaincy the saying is that we’re there to walk through the valley with you when you need it the most. We’re in the midst of the death when it’s happening, when someone’s whole world has been changed in two seconds. We’re there to help them along.

MEA: I’ve been a police chaplain for a little over two and a half years now but I don’t really see this as a job. There are a certain activities they like to have us do: a roll call, a ride-along, to show up at certain community events, to liaison with in the community and the department on various issues. There’s a history of some contentious issues between the police department and the African-American community, so me sitting at the intersection of those identities gives me a good insight into a lot of these things. I appreciate Chief Harteau for the opportunity to change the model of what a chaplain is, and allowing for those folks who are vested in the community to have an impact in a way that is truly authentic to us. I take the job seriously, and I see the chaplaincy as an outgrowth of the work that I already do whether we’re getting to know new recruits or riding along with 20-year veterans, we try to see things through their lens. I think there is a lot more support that needs to be given to the officers. Sometimes there’s certain norms that cops tend to do because it’s just the way they cope with the job.

What have you learned about human nature in the process of interacting with people in these moments?

LK: Everybody deals with grief differently. You get some people who just stand there with nothing on their faces – just blank. You get some who just cry and scream hysterically. It’s all okay.

MEA: I’ve come to learn that the chaplaincy is a “ministry of presence.” Sometimes it’s not just about having the right words or being able to say the right things; it’s more about me being the space and visible. Whether I’m speaking with someone who has been involved with some trauma or just passing out bottles of water, it’s definitely about the ministry of presence. I think that human beings by and large are all the same, but that we experience pain in different ways. There is something about a community that has had some historic trauma, that the trauma they deal with is never fully unpacked. Therefore, in many cases, when something happens, they’re already at a tipping point. 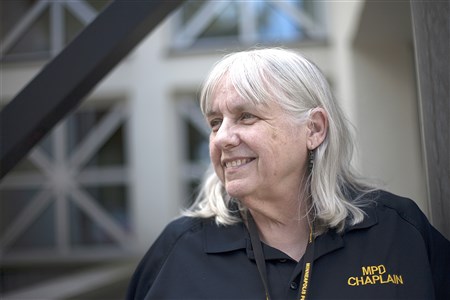 As a police chaplain and a community member, you straddle the often dysfunctional space between community and police in this precinct. What needs to happen for the tension to be resolved?

LK: I think chaplains can be a bridge between the department and the community. A lot of people don’t understand how much there is for the police to do at a crime scene. Chaplains can talk to the community in ways the police can’t. My ties to the department have helped change attitudes within our congregation. We always invite police officers to our church socials. It’s a no-stress situation for people to sit down and talk to them. Some of the officers, especially the ones that work at night, they don’t see the best of the community. This gives them an opportunity to see that there are a whole lot of nice people out there.

MEA: There’s no way to fully understand the violence in a community, or the disparity without a historic view of what has taken place over time. There are some bigger things here at play. So in order to ease the tension, there has to be the recognition that it cannot always be punitive. I’m not saying that there should be nothing punitive. My religion, my faith has guidelines, and that’s a good thing, humanly speaking, to have those guidelines and morals to keep to. But I think that in this context, in terms of healing, there needs to be an openness and willingness on behalf of both the community and the department to have an open dialogue and facilitate and some tangible work as well. People who are in meaningful conversation with each other generally are not hurting each other.

What do you think needs to happen in order for the violence to stop?

LK: I wish I had a magic wand. Something has to be done about the availability of guns and the attitude of hopelessness. It’s kids who don’t have hope for the future that are being violent. I understand the rights of people to have guns but what about the rights of all the people who have died and their families? It’s just so sad.

MEA: The violence doesn’t makes sense to me. But I’ve come to know, as a person of faith, that when things don’t make sense, it means we’re looking at an illogical situation through a logical lens. We have to look at things in the context of how they have taken place. When we consider the history of what produced the violent act, we say that it was just a matter of time. But the response is different if we look at it in context, rather than just looking at a snapshot. I think that North Minneapolis has been looked at too often as a series of snapshots, as opposed to meaningful engagement and dialogue.

What hopes do you have for North Minneapolis’ future?

LK: Safety, health, and education. Kids need to know that there is a way to change their lives. The biggest thing they can do is to choose to get an education and use it.

MEA: My hope lies in the good people, the people I see every day here. Things may not always be right, but they are committed to making things right. I want North Minneapolis to find its voice again, to put it into the public space in a very authentic way. The area has what I regard as certain grit that I can appreciate, a place where people have to get it done, having to transcend their current situation. I want those stories to be told. The neighborhoods were once left for dead; it’s like the phoenix rising from the ashes. It’s the power of that grit to transform us over time, even as we have more disparity in this zip code, 55411, than anywhere else in the state of Minnesota, in education, health, income. The greatest disparity is in the place where you and I are sitting right now. Do we have issues. Absolutely. But again, I have faith. I believe fully that there are many more good people in the world; I haven’t lost faith in humanity. I think that’s important, particularly as a public servant. I’ve seen a lot of things that could easily have jaded my views, but it hasn’t. I really attribute that to my faith in God, my faith in tradition, and keeping that faith in humanity.