Thousands of people from more than 200 Native American tribes have joined the protest against a pipeline that would carry crude oil from the Dakotas to Illinois—and a number of United Methodists, including Dakotas-Minnesota Area Bishop Bruce R. Ough, have visited the site of the protests and offered support to the Standing Rock nation.

A federal judge recently denied the Standing Rock Sioux tribe’s request for an injunction that sought to temporarily stop construction on the Dakota Access Pipeline, but immediately after the judge’s ruling, three federal agencies said they would halt construction in one area of North Dakota that’s particularly significant to the tribe. The Standing Rock tribe believes the construction and operation of the pipeline threatens its environmental and economic well-being and would damage or destroy sites that have great historical, religious, and cultural significance to the tribe.

Earlier this month, Ough issued a statement of support for the Standing Rock Sioux—and last weekend, he traveled to a large encampment where peaceful protests are taking place. Fr. John Floberg—rector of Episcopal churches St. James, St. Luke’s and Church of the Cross, located on the Standing Rock nation—served as his guide.

“I mostly wanted to go and see for myself what is happening, to listen and make connections,” said Ough. “There is no United Methodist presence at Standing Rock.” 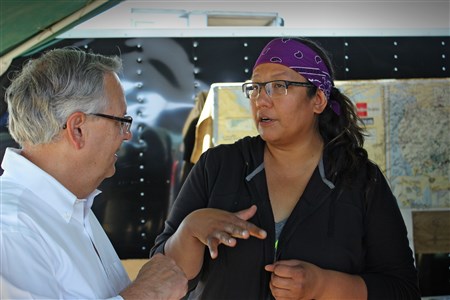 Ough spent time visiting with people at the camp and delivered a message of hope to those present.

“It is with intentions of unity, peace, and hope that I bring you a message of support from the United Methodist Church,” he said. “I lift each of you up in prayer and will continue to do so daily. My hope is that you will not let the spirit of this gathering die. The United Methodists hope to work in a continued relationship to fulfill God’s commandment to be stewards of creation, and maintain loving relationships with all of God’s people.”

Ough grew up in northwest North Dakota amid the oil fields. His father earned his living working for an oil exploration company, and Ough attended a Bureau of Indian Affairs school during his junior high years. After graduating from North Dakota State University, he spent two years living and working on the Standing Rock Reservation.

“I grew to love the Lakota and Dakota people, their spirituality, and their deep respect for God’s creation and creatures,” he said. “I have a unique history and perspective on the current conflict.”

Phyllis Young, a member and former councilwoman of the Standing Rock Sioux Tribe, greeted Ough and thanked him for making the trip. The two informally discussed the camp and ways to continue the conversation.

They were present for a peace pipe ritual during a prayer ceremony at the site where earth has been disrupted for the pipeline. The site is a burial ground where it is reported that remains have been disturbed. They also saw tribes from the northwest U.S. welcomed as they paddled in by canoe and observed the blessing of the camp staff.

“There was a collective awe among those who gathered for how many individuals, communities, tribes, and nations joined together in solidarity for what is just,” said Henry-Crowe. “We were struck by just how prominent prayer and spiritual practice were during the gathering, and I truly felt the presence of God among all of these protectors and justice-seekers.”

Meanwhile, Rev. David Wilson, superintendent of the Oklahoma Indian Missionary Conference of The United Methodist Church, has been on the ground at Standing Rock twice in the last month.

“When I first heard about the issues that the Standing Rock nation was facing, I immediately felt called to learn what was going on and how we could help,” he said. “We are a conference made up of entirely Indian United Methodist churches, the only one like it in this nation. The people at home began asking, ‘What is happening and what can we do?’ I felt like I had to come and find out.”

Both times Wilson has visited, he’s brought people and donations from the Oklahoma Indian Missionary Conference with him, and he’s connected visitors—including Ough—to the people of the Standing Rock Nation.

“When people come to Standing Rock, they learn so much about the issues, about who we are as indigenous people and how diverse we are,” said Wilson. “There are 200 tribes represented at the peace camp. They are all alike and yet so different. It is my hope that people would find ways to respond and form connections and meaningful relationships.”

Wilson sees the action and support from The United Methodist Church as vital to the integrity of the denomination.

Other annual conferences and individuals have also made the journey to Standing Rock, including the Dakotas Conference and the Yellowstone Conference.

JuDee Anderson, a member of First United Methodist Church in Sheridan, Wyoming and the Yellowstone Conference’s Committee on Native American Ministries, went to the camp with a team.

“We are strongly committed to encouraging the church to support this peaceful protection of the land and water and will be working toward this from the Yellowstone Annual Conference,” Anderson said. “We will be returning to Standing Rock for learning and to support those who are there. We have worked with the Sand Creek descendants and we wrote the petition to the General Conference regarding the church and Sand Creek. So coming to the camp at Standing Rock to volunteer is important from our perspective.”

The group from the Yellowstone Conference made the seven-hour trip last Friday, volunteered at the cooking tent on Saturday, and then returned to Wyoming on Sunday.

Several other clergy throughout North and South Dakota have visited the camp and provided support too—and a conversation about the pipeline and protests has begun on the UMC Fields of Justice Facebook page.

“There are several ways to respond,” said Wilson. “One is to visit and volunteer at the camp. Another way is contributing financially through the Dakotas Conference and the Oklahoma Indian Missionary Conference. The infrastructure of the camp is costing $1,500 to $1,800 a day.” 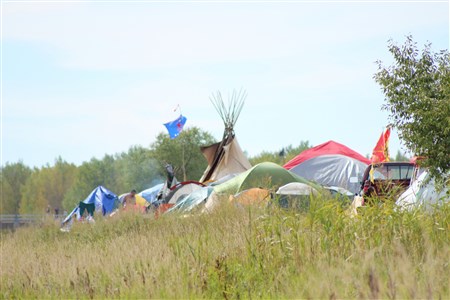 Donations to the Dakotas Conference will be channeled to supplies and hands-on support needed at the peace camp on Standing Rock. Funds can be sent to the Dakotas Conference via mail (P.O. Box 460, Mitchell, SD 57301) or donated online. (Make sure to write “Standing Rock” in the memo line of checks.) Mike and Libby Flowers, directors at Spirit Lake Ministry Center, will coordinate the purchase and delivery of needed supplies.

Financial donations for general operations, legal fees, and other expenses can be directed to the Oklahoma Indian Missionary Conference via mail (602 SW 35th St., Oklahoma City, OK 73109) or online (make sure to indicate “Standing Rock” when making a donation).

Perhaps the most significant way that United Methodists can respond is by learning about and building relationships with our Native neighbors.

“I pray that we may grow in our understanding and connections, and grow in a love for our neighbors of the Standing Rock nation and all Native American people across the Dakotas and the world,” said Ough.

“May we as United Methodists join with all those praying for justice and standing for a peaceful path forward that protects God’s people and God’s planet,” she said in a statement.

The work of connection and relationship has begun and will require a continued, enduring effort from United Methodists.

“I want to say how thankful I am for Bishop Ough, Susan Henry-Crowe, and others who have come here to learn about what is happening, to listen, and to be present,” said Wilson. “That has meant so much to the people here at Standing Rock. That is a great start to a relationship with the people of Standing Rock and beyond. This has been a great week for the United Methodist presence.”