Debra Morales says it was God who led her to The Well’s Apple Valley campus. She had been attending the Rosemount campus of The Well (formerly Rosemount UMC) since moving to Minnesota from California four years ago. But her daughter, who is in her early 30s, was looking for a different kind of church for her family. Morales started probing her daughter about what she wanted in a church, and around that same time, she met other young families who were saying the same things.

Morales conducted an informal poll asking young families what they were looking for in a church, and she created a spreadsheet with the results. When she learned that Rev. Nate Larson was going to be the pastor at a second campus of her beloved church, she shared her findings with him—and the two got to talking.

“I just knew that God had called me to be part of this church for these younger families that are short on time but want to serve and need a different way to worship,” said Morales.

She has since been working closely with Larson and several others to get the Apple Valley campus off the ground. The church meets inside of the Carmike Movie Theater, and it aligns with many of the desires that Morales heard from the families she surveyed: It has a young pastor who has his own family and can relate firsthand to their life circumstance. It has modern worship music—music that you might even hear on the radio. It doesn’t have “canned” prayers or recitations. It focuses on a one-on-one relationship with God. And you can come as you are—people are welcome to wear jeans and to bring the provided coffee, popcorn, and pastries into the theater that serves as the sanctuary.

Although Morales always thought of herself as pretty traditional when it came to church, she has fallen in love with this new faith community. “There is no pretense of what you have to be—just a personal relationship with God,” she said. “I have never felt as close to or as loved by a church family as this group.”

Expanding to a second site was a prayerful decision for the people of The Well and one that took time. Demographically speaking, Apple Valley was a prime location since there was no United Methodist church in the city, which is home to many young families. 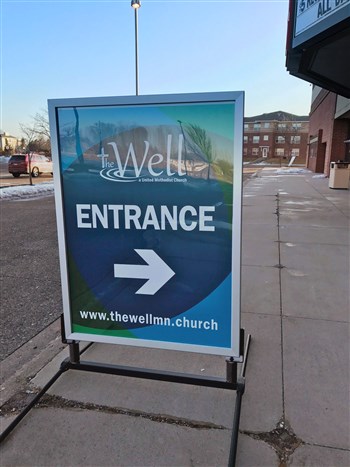 To prepare for the launch, The Well’s Rosemount campus gathered about 120 leaders from the congregation and did a nine-week leadership training class called “Acts 2 Academy.” Through that class, participants explored their own spiritual gifts and learned about discipleship and how to reach the unchurched. Both pastors and lay people did the teaching.

Roughly 40 people who went through that process became part of the Apple Valley launch team, which consisted of about 65 people in all. To get the word out about launch Sunday, which was Feb. 12, the campus sent mailings—but the core team was also very intentional about inviting people to come and check it out. The Acts 2 Academy had prepared them to share Jesus and invite people to church.

“Nothing trumps personal invitation,” said Larson. “Every week, we ask: Who are you inviting? Who are you praying for? Who could connect with God through the way we do church in Apple Valley? That’s the secret sauce—getting people excited and then having them invite others, trying to train 120 church planters.”

The Apple Valley campus has consistently been averaging about 100 in worship since its launch. For now, there’s one service at 9:30, but Larson is already paying close attention to when it will be time for two.

Larson says the movie theater has removed some of the barriers for unchurched people. One man who came to two of the first five weeks of worship hadn’t been to church in 20 years. He told Larson this was the first time he felt comfortable enough to visit a church—and he liked it enough to return.

“I’m convinced that a big reason many churches are struggling is that a lot of us still exist to do things we like, and we’re not willing to die to those so others can come to faith,” said Larson. “Church can either make insiders uncomfortable or outsiders uncomfortable. For too long, we’ve made our church people comfortable. We need to have a continued focus on existing for those who are not yet part of the kingdom.”

The Apple Valley campus has a number of small groups—and each Sunday, there’s a very brief tutorial about how newcomers can sign up for one online.

The Apple Valley campus and the Rosemount campus align in terms of their focus areas—worship, small groups, and service—and they share a website, sermon series, mission, and set of values. But how they “do” church differs significantly.

“If we’re trying to reach new people for Jesus, the mission stays the same over time,” said Larson. “But if we’re not evaluating and changing our methods, we become obsolete pretty quickly. We always need to be asking: Are we bearing fruit? Are people being discipled? Are we making a difference in the community and the world? Are people becoming more like Jesus? We need to have a passion for those who don’t yet know Jesus and continue to do whatever it takes to reach the next person for Christ.”