The impact of homophobia, transphobia, and heterosexism within The UMC

In the afternoon session on Friday, delegates and bishops gathered for a time of learning and conversation on understanding the impact of homophobia, transphobia, and heterosexism within The UMC. Attendees were encouraged to begin the conversation by remembering their baptisms during a time of worship.

Three people told stories, with a time for small group conversations after each story. A list of resources and definitions were shared with the delegates.

Impacts of homophobia in the church

Rev. Angie Cox is a licensed local pastor at Livingston UMC and Broad Street UMC in Columbus, Ohio, part of the West Ohio Conference. She shared the story of her faith journey. She was deeply hurt by being rejected from the church of her childhood.

“It was the church that led my grandparents and aunts and uncles, including a minister, to gather for a family meeting and decide, just a few days before Christmas, that my partner and I would never again be welcomed in their homes or at their tables.”

Cox hated the church for many years, until her early thirties, when she decided to attend a non-denominational church with a co-worker. She called it a very real encounter with God, one which erased her hatred and bitterness. She went on mission trips, worked at the food pantry, attended worship, and studied scripture.

“I eventually fell in love with Jesus and the Gospel for the first time in my life,” she said. 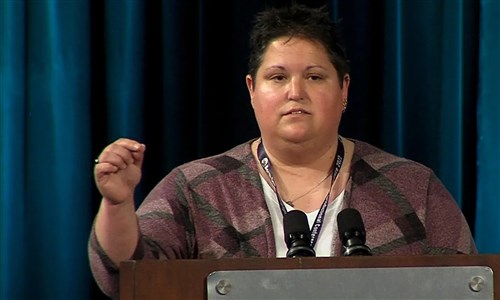 But when she wanted to be baptized, loving Jesus and serving wasn’t enough. The church refused to baptize her. Learning this was heartbreaking for Cox.

“I would never be allowed to explore the sense that I was being called to do more,” she said. “The people who I had believed loved me, posted baptism pictures from the day, all celebrating something I could not.”

She did some research and started attending a reconciling United Methodist congregation. She asked the pastor for a meeting. She felt completely safe with a pastor for the first time and left full of trust and hope. The next week, the church welcomed her completely. She found healing in many ways and her heart for Jesus grew stronger.

“And the best part?  I was finally baptized! It was a joyous occasion” she said.

About a year later, Cox formally requested to begin the candidacy process. She knew it would be a hard path because of the language of the Book of Discipline.

“I simply knew that God had called me back into the church to serve and share the gospel. And I had already learned that saying, ‘no God, you’ve got the wrong person,’ was not an option.”

In 2016, she became a certified candidate and began seminary. She became a licensed local pastor in 2018. In 2019 she sought membership as a provisional elder. She was not recommended for commissioning.

“Meanwhile I get to wake up each morning and serve the congregation to which I was appointed, doing exactly what gives my soul a deep peace.”

She tried again every year, and each time was not recommended for commissioning. She said that her work as a pastor and servant of Chirst didn’t mean as much as the discriminatory langage in the Book of Discipline.

“It is utterly devastating to see my classmates ordained year after year— and rightfully so. Though not because they are working harder or pastoring better, but because they are something I am not—hetrosexual.”

Cox will seek commissioning again in 2023 for the fifth time.

She grieves that denominational pronouncements weigh on some so heavily that they leave the church and the faith. The impact of having a pastor who shares an identity and experience with a parishioner can have an enormous impact on someone who for years believed that God did not love them. She can help people heal so they can once again feel that God loves them.

God works through the lives of LGBTQIA+ people every day,” she said. “Despite the repeated ‘no’s, in the face of homophobia, we press on, because that is what God has called us to do. Thanks be to God. Amen.” 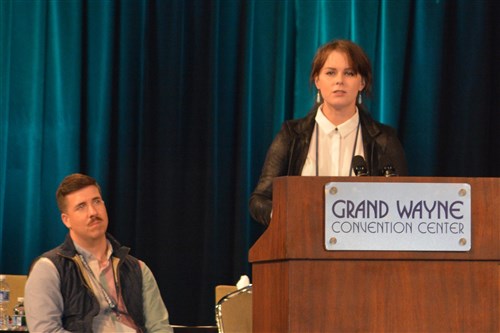 Impacts of transphobia in the church

“I love Jesus, I love my faith, and against much of my experience I still love at least the idea of the church,” Bereznai said.

They were baptized and grew up in the United Methodist church.

“I’ve been told I was unfit to show up in videos that appear in worship because, ‘the church just isn’t ready for that.’”

They listed many other ways they’ve been belittled and discriminated against by Christians. They’ve been asked invasive questions, “almost never asked in good faith, toward understanding,” Bereznai said.

“Since coming out in the church, I’ve been flirted with, mansplained to, and talked over—just the misogyny things that all women in the church are accustomed to,” they said.

They told the painful story of closeting themselves to get and keep a job in a United Methodist megachurch. They explained that they’d never felt more isolated and cried every day on the job. Eventually they found quiet allies and safe people to talk to.

Slowly they felt a sense that there may be a bigger purpose for their presence in the church. On a particularly hard day, they decided to take the leap from despair into faith.

When someone asked if they were okay, they said, No. I’m not okay. My name is Kiri, and I am trans. I’m not a man, and I’m not a woman either. And I’m just too tired to hide anymore.”

They explained that they assumed that admission would be the end of their job. But that person offered compassion and said they kind of already knew. The process of coming out involved months of secretly meeting with leaders and human resource staff.

“I felt happier being known. And my sense of calling just grew,” they said. “Coming out wasn't going to be just for me. It was going to be an education in Christ’s likeness for everyone. Not only to exercise theirs, but to see mine.”

Bereznai wanted to be an example for the queer youth in the church. They felt the importance of having a trans role model for young people

The journey through this coming out path has been rocky. They’ve been nearly fired and prevented from appearing in worship services just for being trans, and had to push hard for leaders to recognize the gaps in quality spiritual experience for marginalized people. They say progress is painfully slow, but they continue to be a thorn in the side of complacency in church spaces.

“I’ve seen myself go from the scary mistrusted trans lesbian queer person on staff to a servant with gifts and insight worth celebrating. The thing is, I always was that servant.”

Bereznai ended their story by urging all to take up the calling in Micah 6:8 that the Lord requires us to act justly.

“The freedom, liberation, and integration of queer people in the church is not a matter of sin or opinion or politics. It is a matter of justice” they said. “Acting justly is required by God. It is not possible for a church to be not of one mind on an issue of justice. To continue on thinking otherwise is to delay justice,”

“Please, do the right thing church; let’s queer up this kingdom.” 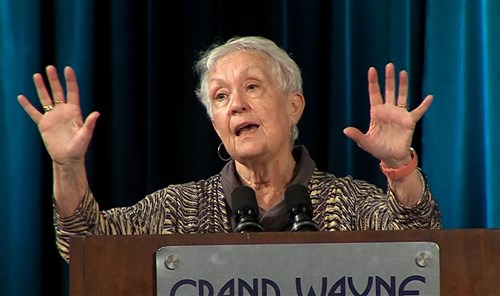 Impacts of heterosexism in the church

Rev. Mary Ann Moman explored the history of hetrosexism in the church by telling a story of a couple named Michael and Allen. In 1992, in Broadway UMC in Indiana, they came to Moman asking her to lead a service of holy covenant for their relationship. So on July 25, 1992, she, along with four other clergy, presided in this service of holy covenant.

At the time, Broadway UMC was in a conversation of what it meant to be a reconciling congregation. They talked, prayed, studied the bible, and argued.

As a part of their ordination vows, clergy are asked “Do you expect to be made perfected in love in this life?”

Moman said, “The hardest work I have ever done as a Christian and as a clergywoman is to be made perfected in love.”

She used the story of presiding over Michael and Allen’s service to show how we live in a world where hetrosexuality is the norm.

“When we held this service at Broadway, the papers got hold of it,” she said, going on to describe the deluge of letters she received, some telling her she had desecrated the altar of her church.

When heterosexism is the norm, anything outside the norm is a threat. It wasn't hard for people to objectify these two men, calling them “gay men” rather than “Michael and Allen”. The focus was shifting from a celebration of a relationship to an attack on marriage and family as well as an attack on the clergy who dared to say there might be more than one way to form a family that is faithful to God.

Moman discussed the dilemma of providing ministry under the Book of Discipline.

In the fallout from this service, the clergy were said to have disobeyed. The offense was not that a same-sex couple were active members of the church, but that someone with authority in the church would affirm their commitment.

For the first time in 30 years she pulled out the letters she received about this service. She was reminded that there were also many letters full of support for her and for Michael and Alan.

This was just one moment in the history of heterosexism in the church, and “the story isn’t over, because it has been 30 years, and we’re still talking about this.”

“People are often scandalized by extravagant grace,” she summarized. “Extravagant grace has paved the way so that heterosexism doesn’t have to be the norm. People who once felt silenced have been finding their voices, and their voices are getting stronger… Living in fear prevents us from hearing God’s call to love our neighbor as we love ourselves.”