After numerous delays, construction of Koronis Ministries’ long-awaited Tabernacle finally began this summer. Heavy equipment arrived in early June to begin excavation of the site in preparation for construction of the 18,000-square-foot, two-story building that will house a new $4 million dining and meeting center.

A new Tabernacle has long been part of Koronis’ master plan for development—and camp consultant Kaleidoscope, Inc., in 2012 affirmed the plan to build a new tabernacle and cited it as a key leverage point for Koronis’ long-term vitality. Plans for a new multi-level, multi-use Tabernacle at the Paynesville camp have been in the works for several years, and the former Tabernacle was razed in spring 2015. Since then, a capital campaign has been underway to raise funds for the new structure, which overlooks Lake Koronis.

The lower dining-room level is now enclosed, with most of the underground plumbing and electrical infrastructure complete. In addition, much of the exterior excavation and drainage is wrapping up. The hope is to soon pour the cement floors, and enclose the upper level to enable construction to continue throughout the winter.

The project still faces some potential supply and permitting hurdles, but if all goes well the building should be ready during Koronis’ 100th anniversary summer in 2022. The completed Tabernacle will have an upper-level meeting room overlooking the lake with a capacity of nearly 300, and a lower-level dining room that can comfortably seat well in excess of 200 guests. 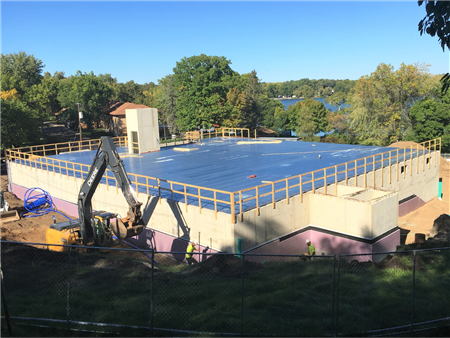 Costs for the project have risen due to increasing material prices, as well as unexpected expenses related to site excavation and a county-required septic-system upgrade. The price for the structure itself will come in at a bit over $4 million, although ancillary projects like paving, an upgraded sewage system, and landscaping will add to the total project cost.

The project will be funded primarily from three sources:
1. proceeds from the sale of former UMC camp properties
2. an insurance settlement from the fire that destroyed the camp’s kitchen in December 2019
3. donations from supporters of Koronis Ministries

The new Tabernacle will honor the cherished memories and features of the original structure while better meeting the needs of future generations with amenities that the original structure lacked—like air conditioning, heat, improved lighting, and advanced technological capabilities. The picture window, one of the distinguishing features of the historic tabernacle, will be reconstructed in the new building. And the new tabernacle, like the original one, will provide a sacred space where people of all ages can sense God’s call in their hearts and commit their lives to Christ.

“With the increase in project costs that we’re facing in this volatile economy, our hope is that friends of the camp will be willing to dig a bit deeper to give to help us bring this vital project to the finish line with minimal construction debt,” said Ziegler.