Last year, you enabled 12 church starts to reach new people in their communities, supported one new site of an existing church, and walked alongside seven faith communities that started new worship services. You also made it possible for 19 churches to start new ministries with the help of a congregational development grant and for 12 churches to dream bigger through a revitalization process.

That’s only the start of what was accomplished through Minnesota churches’ 2019 apportioned giving.

“As we navigate this uncertain time within The United Methodist Church, we are especially grateful for churches’ continued commitment to our shared mission through their apportioned giving,” said Barb Brower, the Minnesota Conference’s director of finance and administration, and treasurer. “Together, we are making a difference. It increasingly appears that God is birthing something new within our denomination, and thanks to your generosity, we as an annual conference are in a strong position and ready for whatever is next.”

The Minnesota Conference’s 2019 apportioned budget totaled $6.3 million. In June, members of the 2019 Annual Conference Session approved a flat budget for 2020. Given the likelihood that The United Methodist Church will change in structure after this year’s General Conference, a significant reduction has been planned for the 2021 budget.

The majority of funds remitted by Minnesota congregations stay within Minnesota and support various Minnesota Conference programs and mission efforts. In addition to paying for church-planting and revitalization efforts, apportioned dollars support The ELI Project college internship program and the conference’s lay servant ministries; programs for pastors, such as the Clergy Leadership Academy and Shmita; conference camping and youth ministries; disaster response, Hopeful EarthKeepers, and other programs to heal a broken world; and vital resources for congregations, including the administration of pension and health insurance plans. 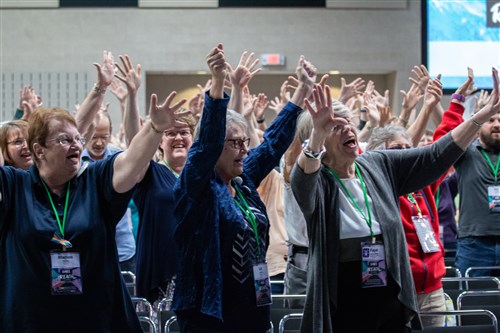 About 23 percent of funds remitted by local churches go to the global United Methodist Church to pay for ministry and mission around the world. At the general church level, the money supports bishops, United Methodist ministerial education, most general agencies, and denomination-wide efforts such as the Black College Fund, which supports historically black colleges in the United States, and Africa University in Zimbabwe, the only United Methodist-related, degree-granting University on the continent.

“More than anything, we want you to know that we respect and honor the resources we have been given, and we seek to steward them well for the sake of helping every one of our congregations live out our shared calling to grow in love of God and neighbor, reach new people, and heal a broken world,” said Brower.

Thank you for your commitment and generosity, Minnesota United Methodists!