Tebow, a former New York Jets backup quarterback, became known some years back for “Tebowing”—a move in which he went down on one knee and prayed during games. He talked about Jesus often and made clear that football wasn’t the most important thing in his life.

Kaepernick, meanwhile, is a former San Francisco 49ers quarterback who became known several years ago for “taking a knee”—or sitting (rather than standing) during the playing of the national anthem prior to games as a protest against racial injustice and systematic oppression in the U.S. He, too, is a person of faith and he, too, has made known that football isn’t the most important thing in his life.

Eaves pointed out that Tebow and Kaepernick illustrate two different ways of living out the Christian faith—and those two ways often get separated from each other.

“I believe that the church the world needs today needs to combine something of both of them,” Eaves said. 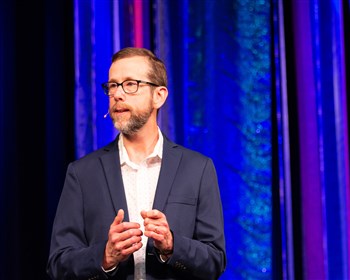 Eaves’ conviction: We can listen deeply to our scriptures and study them with best tools available to us, and we can work for the liberation of our LGBTQ neighbors. We can put our full trust in Jesus and follow His word, and at the same time stand up against injustice and oppression in whatever forms they present themselves. We can be on our knees praying like Tebow and engage in daring activism like Kaepernick.

“Both of those meet right on the cross with Jesus,” Eaves said. “It is a ‘both/and’ gospel we are called to live out.”

He invited those gathered to think about how they can build bridges with those around them and embody a “both/and” church.

Jesus shows us again and again what it means to be a bridge builder—including through the story of the woman at the well as told in John 4, he pointed out. Jesus cared about the eternal life of the woman and wanted her to have the living water that would forever connect her to God. But he also cared about sending her back to heal her community.

“The church has always been at its best when it has been a ‘both/and’ church,” Eaves said.