Michael Coyne was not looking for a faith community, but God brought him to Recovering Love Church anyway. A friend invited him to a Bible study there, and he said no. The same friend later invited him to a church picnic, and he once again refused. Yet he found himself attending the picnic anyway. There, he ran into Rev. Brad Herman, whom he had previously met when Herman worked as a spiritual director at Hazelden Betty Ford Drug and Alcohol Treatment Center in Center City.

“I said, ‘Brad, what are you doing here?’” Coyne recalled. Herman explained that he was the pastor of Recovering Love, a church plant in Richfield that specifically focuses on those recovering from addiction. A recovering alcoholic himself, Coyne said he has so much respect for Herman that he decided he wanted to not only join Recovering Love Church but be part of the launch team that’s seeking to help grow it. He was surprised to find that other people on the team were friends of his from the recovery community.

“I feel incredibly welcome,” Coyne said. “Not only do I feel welcome, but I feel like a part of the foundation of this church.”

Inclusive from the start

Recovering Love had its first public worship service just six weeks ago. For this faith community, living into the Minnesota Conference’s inclusive vision means supporting and walking alongside those in recovery—but the church is also intentional about welcoming LGBTQIA+ people.

“Loving as Jesus loves is vital to our mission,” said Herman.

Recovering Love’s core group of about 30 people is tasked with forming relationships with people in the community and inviting new people each week. Coyne, a gay man, spends lots of time reaching out to other LGBTQIA+ people. Each week, he attends four recovery meetings geared toward that community and invites as many as 500 people to Recovering Love Church through those meetings. Several same-sex couples have begun to attend the weekly worship services in recent weeks.

“Addiction, just like the gospel of Jesus Christ, is indiscriminate,” Herman said. “The truth is that we have all been leveled by addiction and, from that state of being, we all gather to seek a common solution: the grace of God in Christ Jesus.”

Herman said the nature of addiction often separates people from God, from others, and from one’s true self. Jesus’ love brings individuals back into communion with all three. Addicts and alcoholics tend to be wary of religion, so the church practices attraction rather than promotion, in line with the teachings of Alcoholics Anonymous.

“I believe the graceful welcome of Jesus is attractive,” said Herman. 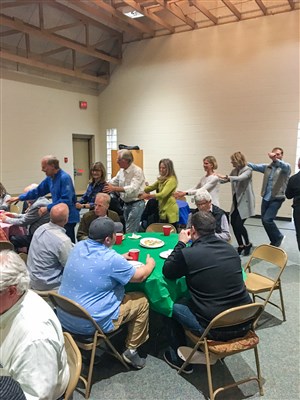 Herman hopes that as Recovering Love Church becomes more established, it will connect with local clinical treatment centers and serve as an extension of their work. He also wants the church to be a place of healing for families and couples, not just the individuals in recovery.

Coyne appreciates that Recovering Love Church offers the specific structure, resources, and community that people in recovery need most.

“The most important thing I’ve learned at this church is that I am powerless over the fact of God’s love for me,” Coyne said, adding that accepting this powerlessness becomes the strength that helps him be open-minded and honest at church. He has come to see that when he is not in charge, but instead relies on God’s grace, his prayers are answered. When he reflects on the amazingly well-timed and meaningful connections he has made with people at church, he realizes that God has been anticipating and fulfilling his needs and prayers.

Coyne grew up Catholic, but he never really embraced the faith. He remembers meeting various people connected with The United Methodist Church at different points in his own recovery and formed a positive impression of The United Methodist Church in Minnesota and its inclusiveness of the LGBTQIA+ community. But even though he considered himself spiritual, he didn’t intend to make God or the church part of his recovery life.

Looking back, he believes God led him to Recovering Love Church.

“I have a stronger connection to God now than I ever have in my life,” he said.