“To reach courageously is to take a ‘soul stand,’” Bishop Bruce R. Ough told a large crowd Friday night at Embrace Church in Sioux Falls, South Dakota. Nearly 500 gathered there for a two-day “Reach” event featuring a variety of speakers and breakout sessions designed to equip attendees to reach new people in their communities and contexts.

Before Bishop Ough gave his keynote presentation during opening worship, Rev. Adam Weber—lead pastor at Embrace Church—welcomed attendees. “I pray that God would ignite a passion inside you” through this event, he told them.

In his address, Ough told the story of Alice Walker, the African-American author of the Pulitzer Prize-winning novel “The Color Purple.” Early in her career, a leading national magazine asked her to write about growing up in the South. Though Walker was pleased with what she produced, the magazine suggested major revisions and ultimately told her she would have to change the article or it wouldn’t be published. After considering the positive impact such an article would have on her budding career and weighing that against her integrity as a writer, Walker told the magazine’s publishers that the only thing she had to do was choose those things that mattered in order to save her soul. In other words, Walker took a “soul stand.”

“Such courage, that which maintains integrity to one’s true self and to the gospel of Jesus Christ and is able to transcend personal gain and even personal preferences for the sake of others, is always an exercise or expression of the Holy Spirit that lives, dwells, and makes a home within our center, our heart, our inner being, our soul,” Ough said.

To drive home his point, he also shared a story about a soul stand he personally witnessed years ago. While he served as the Iowa Conference’s director of the conference council on ministries, the pastor of a small village church told him about its declining numbers and asked him to come lead a two-day consultation. After interviewing a variety of church stakeholders and hearing the same laments about decline and despair, Ough started giving an oral report at a congregational meeting when a woman sitting in the back of the sanctuary interrupted him and said “There are 13.” 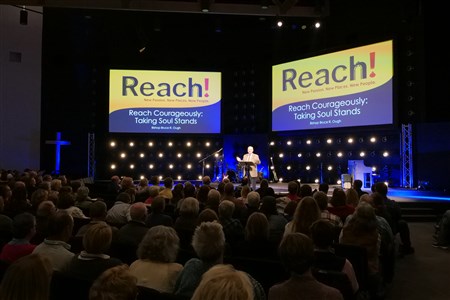 When asked to elaborate, she explained that she had started to notice the bus that picks up children in town to take them to a school several miles away. As the children lined up to get on the bus, she counted them. And after several mornings of watching them get on the bus, she began to pray for them each day. Her prayer eventually took on a new dimension and she asked God for guidance on what else she could be doing to show Jesus’ love to the 13. She told the congregation that God had given her a vision for reaching the 13: The church could take some of its building endowment and use it to start an after-school ministry.

“The Thirteen Woman is a model for what we need to be about if we want to reach courageously,” Ough said. “It takes great courage to escape or challenge the narratives of decline and despair, or ‘we have never done it that way before,’ or ‘we are comfortable, thank you very much.’ It requires a soul stand!”

A few weeks later, Ough checked in with the pastor of the Thirteen Woman’s church. The congregation had decided to use its building maintenance endowment to fund an after-school program. Members prayed that God would call a “planter” to develop an after-school ministry, and a teacher in a nearby town was indeed called by God to respond. Within a few weeks, the church launched its ministry. Soon the children’s parents became curious, and eventually, many began to participate in the life of the congregation.

Every congregation that has taken a soul stand to reach new people demonstrates three overarching dynamics, Ough said: They are a praying congregation—praying that God will work through them to accomplish God’s kingdom purposes. Their worship is passionately focused on God—praising God and expecting that God in Christ will transform them. And congregants are eager and equipped to share their God stories.

Bishop Ough concluded by telling attendees that he’s been praying that the Holy Spirit will open attendees’ hearts and minds to new possibilities through REACH! That could translate to launching a new service or satellite, adopting a new evangelistic and mission narrative, or starting an online campus.