A look at racial diversity within the Minnesota Conference

He pointed to Revelation 7:9, which promises that ultimately people of every nation, tribe, and language will sing God’s glory.

“The witness of the church increasingly is tied to its ability to engage diverse people in structurally healthy, equitable, meaningful ways not only within the church but in the community,” he told UM News Service last year.

Here's what we found: 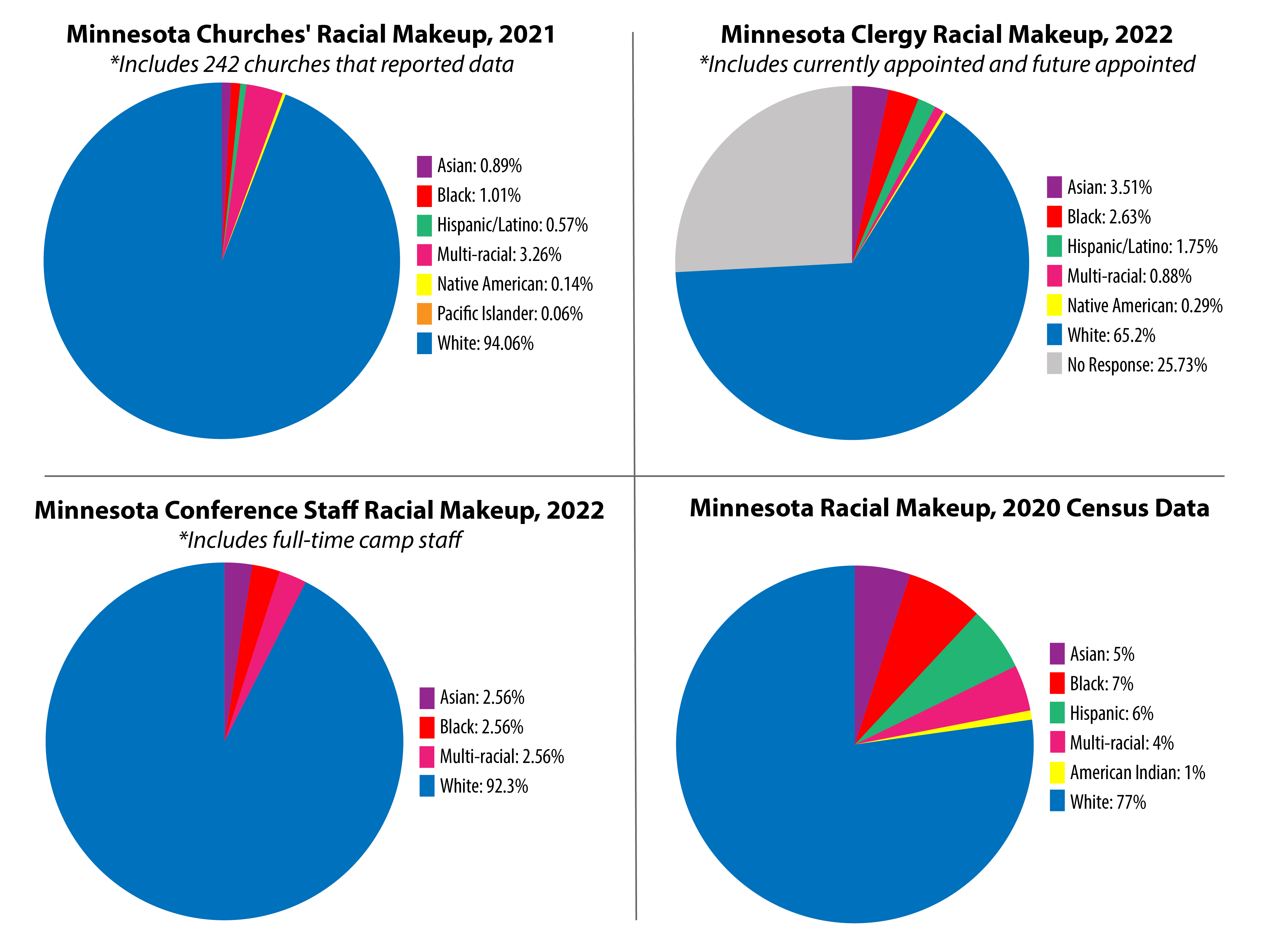 What does this mean? Well, to be blunt, we’re nowhere close to reflecting the diversity of our state at any of the three levels examined. According to the 2020 U.S. Census, 23 percent of Minnesotans are people of color.

“One of our scriptural imperatives is to reach new people—all people,” said Rev. Cindy Gregorson, director of connectional ministries and clergy assistant to the bishop. “If we are going to be effective in our mission, then we need to have leaders and congregations who reflect the communities and neighborhoods in which we live.”

These data represent a baseline from which we can measure and grow. Each year, we’ll distribute an article containing the latest data to highlight year-over-year comparisons and assess how we’re doing. We encourage church leaders, when filling out the annual data for yourself and your congregation, to be as comprehensive and accurate as possible so that we can get an accurate picture of our racial diversity over time.

Why should we make diversity a priority? For one, the Bible is chock-full of accounts of individuals being called to cross racial and cultural boundaries to do God’s work and fulfill God’s purposes.

If that’s not enough, here’s a more tangible reason: A comprehensive Baylor University study released last year found that racial diversity within a church is associated with higher average attendance over time. For the study, researchers tracked data from more than 20,000 United Methodist congregations over a 20-year period—from 1990 to 2010—and paired that information with census tract data for that time frame to investigate the effect of demographic change on congregations.

Additionally, “inclusive of all persons” and “engaged in the work of justice and reconciliation” are two of the core guiding values we adopted as a conference—and ones that our Cabinet have affirmed and sought to embody.

In December 2020, the Appointive Cabinet released a statement on racial justice and reconciliation that lists specific commitments and actions members will take to acknowledge the sins of racism and injustice and work to transform our Church, our Conference, our communities, and our world into the beloved community. Then last year, the Minnesota Conference hired a racial justice organizer to teach on anti-racism, provide training for cross-racial and cross-cultural appointments, and support clergy of color. More recently, among 14 people invited to serve on a “Transition Table” that Bishop Bard is convening to imaginatively consider the staffing, structure, and resourcing of the Minnesota Conference going forward, four are people of color—representing nearly 30 percent of that leadership team.

At this year’s Annual Conference, there will be an opportunity to consider ways we can take additional steps forward through table conversations and three pieces of legislation that will be considered and voted upon: One proposes an equity audit of human resources at the conference level, another asks the Cabinet to prioritize the recruitment of candidates of color and LGBTQIA+ candidates for open positions, and a third proposes expanding the part-time racial justice organizer position to a full-time, director-level position on the Extended Cabinet.

“Building the beloved community is intentional work and it will not happen instantaneously,” said Gregorson. “But it can happen. We have congregations that are making significant strides in this work and can be our teachers as we all learn and grow together.”

How can your church become more diverse and better reflect your community? And what role can you play in making that happen? That’s for you to discuss and discern as a congregation. But we liked what Rev. Nancy Ellis had to say about diversity in a video that will be shown at the 2022 Annual Conference: “An abundant life in Christ would look like all of us looking in our neighborhoods and seeing everybody—not just the people that we want to see, but the people that are often marginalized and kind of tucked away. There are people of all ethnicities, all colors, in our community. Let’s find them!”