“Don’t cry for he is coming; don’t die without knowing the cross.”

That line, from Prince’s song “The Cross,” is just one example of the Christian messages that appeared in his songs. The global icon has been mourned across the world since his unexpected death on April 21.

1. According to Park Avenue UMC, Prince participated in summer ministries during his youth—and he even went on a few mission trips.

2. Prince returned to Park Avenue UMC for his wedding to his first wife, Mayte Garcia. They were married on Valentine’s Day in 1996 in an extravagant ceremony in which white doves were released as they exchanged vows. Church staff say there were beautiful white flowers, candles, and other decorations—which the couple left for the church to keep.

3. Church staff say that occasionally in the years after Prince’s wedding, he would covertly enter the back of the sanctuary during worship and duck out at the end before anyone saw him.

4. Prince came back to the church in May 2013 for the funeral of his half-brother, Duane Nelson.

5. Prince’s drummer, Kirk Johnson, was also connected to the church at one point. For a time, he played the drums at Park Avenue UMC (it’s unclear when or for how long). 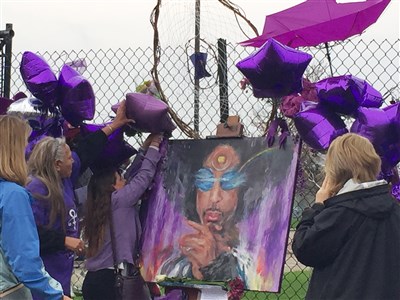 6. Al Nuness, a member of Park Avenue UMC, was Prince’s sophomore basketball coach and physical education teacher. Several years ago, he told the Star Tribune that “Prince was a darn good basketball player” despite the fact that he was quite short. He recalls chasing Prince and two others out of the gym on a regular basis because they were always sneaking in there to play and bringing their bikes and dogs in. They were all “good kids,” he said.

7. Art Erickson, former youth leader for Park Avenue UMC, saw Prince almost every day throughout his teens. He told the Star Tribune that he made the rounds at local schools and would often join Prince at lunch. One day, Prince told Erickson that his home life was troubled and that his dad sometimes locked him in a room for long periods of time. But there was a piano in the room, and Prince taught himself to play on it.

Within the week since Prince’s death, several churches have found unique ways to honor him.

A photo of the sign in front of Tulsa, Oklahoma’s University United Methodist Church went viral last week when the message read: “Dearly beloved, we are gathered here today to get through this thing called ‘life,’ RIP Prince.”