By: Christa Meland, with contributions from United Methodist News Service

After the Traditional Plan cleared a major hurdle Monday morning, General Conference delegates spent the afternoon debating and ultimately voting against the One Church Plan. Minnesota delegates, most of whom have publicly voiced support of the One Church Plan, reacted with both disappointment and deep sadness.

Delegates opposed the bishops’ recommended One Church Plan by a vote of 436 to 386. The vote was 53 to almost 47 percent.

“I am extremely disappointed,” said Rev. Judy Zabel, a clergy delegate who serves Hennepin Avenue UMC in Minneapolis. “For me, it means that I have to decide how I can move forward in my ministry to preach and to teach and to offer good news to all people. For the Minnesota Annual Conference, I don’t know what it means. But I think we need to continue on in our mission to bring good news to all people. I don’t know how we do that in this denomination that has decided that not all people are welcome.”

Monday’s votes mean the Traditional Plan is the only plan guaranteed to go to plenary on Tuesday.

The One Church Plan could still come back, but as a minority report. An amended version of the Traditional Plan, which delegates did not fully take up, also could come before the body on Tuesday.

Also heading to the plenary are two separate petitions that, with certain limitations, would allow churches to depart with their property. 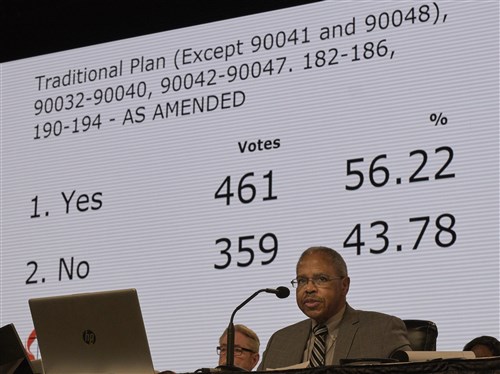 Monday’s votes are a good indication of what direction delegates hope to take The United Methodist Church in its longtime debate over homosexuality.

Zabel vowed to stand firm with LGBTQI brothers and sisters—and although Monday was a day of grieving, she knows God will continue to show up in the days and months ahead.

“God is always bigger than our legislation and God will make a new way,” she said. “We are resurrection people. There always has to be a death in order for there to be a resurrection, and today, there is a part of The United Methodist Church that has died. Something new will rise out of it because we are Easter people. An arc of justice is long—but it is sure, because love will always prevail.”

Lay delegate Faye Christensen, a member of Park UMC in Brainerd, voiced both shock and sadness about the decisions made at General Conference.

She described a feeling of “deflation” among many delegates, including herself, and told the story of two married gay men who are members of the United Methodist church in Mesa, Arizona, that she attends while living there each winter. “Is the church going to kick us out?” they recently asked her. Absolutely not, she told them, but her heart breaks for them and others asking that same question.

“We do have hope that some progress is going to be made tomorrow at the plenary and that we will be doing God’s will,” she said. “That’s what we’re all about…we pray that the Holy Spirit will help guide us to that end.”

The Traditional Plan aims to strengthen the denomination’s prohibitions against clergy officiating at same-sex unions or being “self-avowed practicing homosexuals.” The plan also encourages those who will not obey church prohibitions to find another church home.

On Monday, delegates also voted against moving forward with the Simple Plan, submitted by the unofficial United Methodist Queer Clergy Caucus, by a vote of 494 to 323.

Since the 1972 General Conference, The United Methodist Church has asserted all people are of sacred worth but “the practice of homosexuality is incompatible with Christian teaching.” 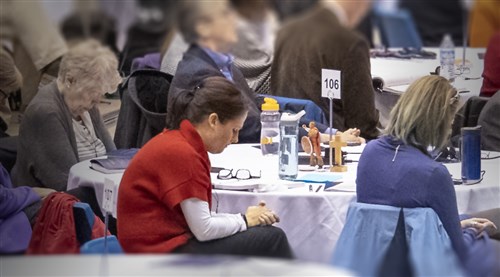 In recent years, as homosexuality gained more public acceptance in the United States and other parts of the church, a number of United Methodists—including whole conferences—have publicly defied these rules.

The 2016 General Conference, after rumors of a church split over homosexuality reached a fever pitch, authorized the Council of Bishops to form a commission to find a way forward.

Both the One Church and Traditional plans emerged from that commission’s work.

The One Church Plan, in particular, inspired impassioned debate during the day’s proceedings.

Defenders described the plan as a way to keep together an ethnically and theologically diverse denomination that has a number of LGBTQ members.

The Rev. Patricia Farris of the California Pacific Conference, speaking in favor of the plan, urged delegates: “Let’s not do anything here to diminish our church or its mission.”

Opponents accused the One Church Plan of dramatically changing the denomination’s connectional form of governance and violating scripture.

“It is better to be divided by truth than united in error,” said Rudolph Merab, the lead lay delegate from the Liberia Conference. He added that the plan would not provide salvation.

Much of the morning’s debate about the Traditional Plan dealt not so much with advocacy for the plan as much as efforts to address constitutional problems raised by the Judicial Council, the denomination’s top court.

Last year, bishops referred the Commission on a Way Forward’s report to the council. That report contained the One Church, Traditional, and Connectional Conference plans.

The court identified problems in three sentences of the One Church Plan and in multiple petitions in the Traditional Plan. It did not take up the Connectional Conference Plan, which also did not gain committee approval on Monday.

The Rev. Maxie Dunnam of the Kentucky Conference brought legislation meant to address the constitutional issues in the Traditional Plan, but the body did not have the detailed legislation in writing. That amended legislation can return as a minority report.

Efforts to amend the One Church Plan to bring it in line with the Judicial Council ruling also hit a snag. The first motion to delete one of the unconstitutional sentences tied 409 to 409, meaning it failed.

The other two changes passed but only narrowly.

Later in the afternoon, delegates voted to send the legislation they had approved Monday—the Traditional Plan and the two disaffiliation petitions—to the Judicial Council for review.

The Judicial Council agreed to rule on a request by the GC2019 legislative committee to review the “constitutionality, meaning, application, or effect” of the plans approved during its business sessions.