After worshiping at a park near the lake and enjoying a potluck picnic, 13 adults, one youth, and four children took their baptismal vows and claimed a new identity in Christ. (View photos of baptism.)

As each person approached the water, onlookers sang the chorus of the song, “Down to the River to Pray,” and they applauded as each new follower returned to the shore.

“This was brand new people hearing the gospel for the very first time and coming to Christ together,” said Rev. Dan Johnson, Twin Cities District superintendent. He and the ministry’s leader, Toubee Yang, performed the baptisms together.

In all his years of ministry, Johnson said he’d never baptized 18 people in a single day.

“It was like living Acts 2—with teaching, breaking of bread, fellowship, and prayers,” he said. “It was a combination of reverence and seeking the outpouring of the Holy Spirit with joy.”

Lincoln Sy Lee is one of the 18 who was baptized on Sunday. Unlike most of the others baptized with him, he had been part of a Christian church earlier in his life. But when his dad died, he became disconnected from his faith and said he lost his way.

It wasn’t until he was married in July when he was reintroduced to Christianity—and embraced it. He and his now-wife Pashia had been looking for a church for their wedding, and they learned about the Northwest Minneapolis Hmong Ministry from Lee’s brother-in-law, who helped launch it. 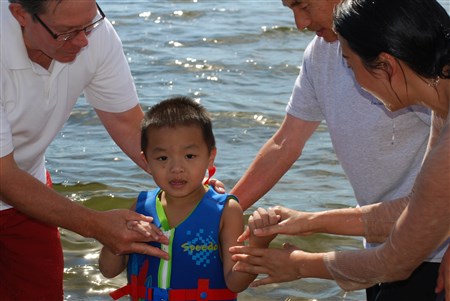 Yang officiated at their wedding and invited them to come to church again, and they did.

“Being a Christian makes me feel a lot better at handling situations,” said Lee, who is 25. “Life is a little bit easier after you can talk to God about situations you can’t solve yourself and pray for what’s going to happen the next day.”

Lee and his wife both grew up in the United States, but their parents are from Laos—where Shamanism, ancestor worship, and the Christian and Missionary Alliance denomination are prominent. Lee’s wife had never been exposed to Christianity before their wedding, but she liked what she learned, and she knew it was important to her new husband.

“I feel like being baptized…it allows me to start over again, start a brand new life,” said Lee. “As our marriage gets started, it’s important that we both get baptized and start a fresh life together.” 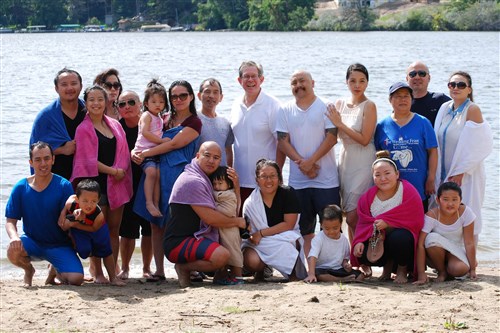 Lee’s wedding afforded many of his family and friends their first opportunity to learn about Christianity. Some have since asked him questions, and he hopes they may eventually join the Hmong ministry. It now has more than 30 in average worship attendance, and it continues to grow thanks to members’ commitment to reaching new people.

In fact, on Sunday, every adult who made baptismal vows also accepted a challenge to bring one more person to Christ before the lake freezes over.

Meanwhile, Yang has also been intentional about building relationships and inviting people in the Hmong community to worship with the ministry—which meets at Olivet United Methodist Church in Robbinsdale. Two days after the baptism, Yang was standing outside of a market where many Hmong families do their grocery shopping, greeting passersby and giving them a flyer and business card with information about the ministry.

“We share the good news, and one day they will come,” said Yang.

The Northwest Minneapolis ministry aligns with the goals of the National Hmong Caucus of the United Methodist Church, which aims to start 12 new Hmong churches in the U.S. by 2020. Although there are more than 400,000 Hmong residents, there are now just 12 United Methodist churches throughout the country. 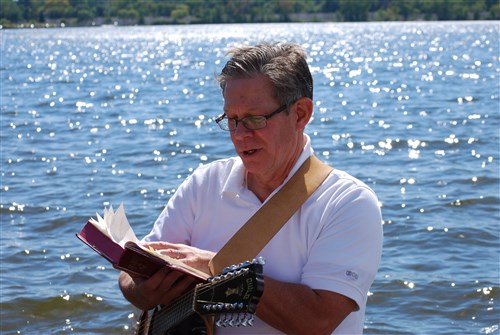 Rev. Tsuchue Vang who serves Wheelock United Methodist Church in St. Paul and is an active member of the caucus, is one of the people working to increase that number. He founded the Northwest Minneapolis ministry and mentored Yang to prepare him to lead it.

In 2018, Vang plans to start another Hmong faith community on the east side of the Twin Cities, another area with a large Hmong population.

In the meantime, Yang will continue to work to grow the ministry he leads—and to bring more Hmong people to Christ.

“All the persons who were baptized on Sunday are very happy—they have so much joy,” said Yang. “I told them that baptizing helps them become brothers and sisters in Christ, and God’s children. They are receiving a new life.”