Several Minnesota United Methodist pastors were among more than 500 clergy who traveled to Cannon Ball, North Dakota last week to show support for the Standing Rock Sioux and join peaceful protests against the Dakota Access oil pipeline—a $3.8 billion project that’s intended to bring crude oil from North Dakota to Illinois. The Sioux tribe says the pipeline that will skirt its reservation threatens both its drinking water and its sacred sites.

After receiving some instruction on the evening of Nov. 2, clergy present gathered the next day for a ceremony in which they repudiated the Doctrine of Discovery, a series of religious documents from the 15th century that justified the colonization of the Americas and the oppression of its native people. They then received a “smudging,” a ritual act of purification, as they walked to a bridge over the Cannon Ball River, where they listened to testimonies from some of those present. And finally, the clergy formed one giant circle—and one by one, each person greeted the individual standing immediately to his or her left.

Rev. Shawna Horn, who serves Little Prairie UMC in Dundas and blogged about her experience, spent a couple of summers during college on a reservation in Wyoming and said that experience opened her heart to the long history of hurt endured by native people and the need for reconciliation. 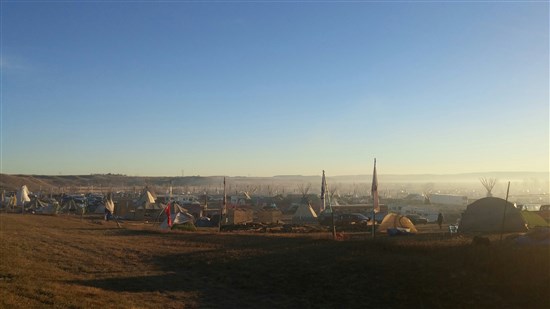 “I went [to Standing Rock] to bear witness, to acknowledge the hurt of a community and a people who are trying desperately to defend their right to sacred space and sacred land, to be present, and to say, ‘yes I see you and I see this,’” said Horn.

For Baudhuin, who also blogged about his experience, repudiating the Doctrine of Discovery was both a critical and meaningful action—because the legacy of that document lives on in our world today, he said.

“What I witnessed [at Standing Rock] is that the hope for America is not in Washington and it is not on your ballot,” said Baudhuin, who serves Aldersgate UMC in St. Louis Park. “The hope for America is on Standing Rock. On this small reservation straddling the North and South Dakota border, in an area too hard to get to for the media to cover, is a people guided by a sense of peace, community, simplicity, and love. Their idea of being ‘great’ is not rooted in being number one, but in living in communion with each other and the land. Their idea of being ‘stronger’ is not in being some kind powerful savior to the world, but in serving one another and the land…The people of Standing Rock are fighting not only for themselves, but for what is truly in the best interests of this nation and the world.”

Leaders of the Standing Rock Sioux say the pipeline is routed across land sacred to the tribe and could threaten drinking water safety. The U.S. Army Corps of Engineers is reviewing permitting for the project, and President Obama has said the Corps is considering whether the pipeline could be re-routed. Thousands have visited the main camp site near Cannon Ball, North Dakota, including Dakotas-Minnesota Area Bishop Bruce R. Ough.

Rev. Susan Mullin, a deacon who serves as minister of faith formation and community outreach at Faith United Methodist Church in St. Anthony, was part of a group of eight clergy from Minnesota who rented a van and traveled together to the event at Standing Rock. She said she’s concerned about our treatment of Native Americans and about our nation’s energy production—and this event was related to both of those concerns. 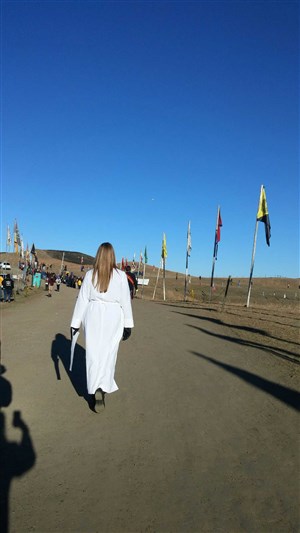 “We’re struggling to find a future that is hopeful and beautiful for all of us,” said Mullin. “Part of that revolves around the whole issue of climate change and energy production and use. We have the ability to switch more toward renewables and yet we have a lot of invested interests in maintain the status quo.”

For a long time, Mullin said she’s been pondering the question: Can we stop ourselves from extracting all of our resources and using them even when we know it’s damaging the climate?

“It makes me hopeful to see these signs of resistance,” she explained. “This was an opportunity to stand in solidarity with people who are raising that question.”

Mullin added that The United Methodist Church has been working to repent for its participation in injustices against native people—and this event was one small way to actively work toward repentance.

Rev. Clint Evans, who serves Faith UMC in Sleepy Eye and Fairfax UMC, was in the large group that traveled together by van. He said he went to Standing Rock to show solidarity with Native American brothers and sisters and to see firsthand what was happening. He left overwhelmed by the gratitude of the indigenous people he met. At one point, a woman—an elder—came up to his group and thanked them for their presence. “I’ve been praying for you to come for a long time,” she told them.

Mullin, too, was touched by the radical hospitality exhibited by the native people. “I was feeling like, ‘My people are your oppressors and you are extravagantly welcoming me to your camp,’” she said. “We could learn a lot from them about forgiveness and welcome.”

“We’re to do no harm,” she said. “What I felt so heavily while I was there was not the sense of ‘this is my fault’ but I represent a community and a tradition that has inflicted generations of harm, that has brought us to this place that doesn’t value the sacred spaces of this people. By 500 of us standing and saying ‘we are here with you,’ that was powerful. There was a sense of healing.”