When Gary Bochman saw the news of Hurricane Harvey flooding, he immediately knew that United Methodist Early Response Teams would be needed in recovery efforts.

Early Response Teams, or ERTs, are volunteers trained to enter disaster-torn areas and provide early recovery help. ERTs can be requested by a United Methodist conference’s disaster response coordinator in times of need, usually after hurricanes, wildfires, and tornadoes. These volunteer teams can be from any state and can respond to local disasters or disasters in any conference across the US.

Two ERT teams traveled from Minnesota to Houston and Dickinson, Texas in November. They helped a few of the thousands of people whose homes and churches were damaged in the hurricane and flooding.

Gary Klason, of St. Charles and Dover UMC, led one team. Rev. Paul Baker of Bethlehem UMC in Hutchinson and Gary Bochman of the town of Outing led the other team. Team leaders organize tools and supplies and coordinate the work of the other team members.

Even two and three months after the August 25 hurricane, many homes were still damaged and life in the communities these two teams served was still disrupted. One church, wanting to provide meals for the volunteer teams, had trouble finding a church member who had a functioning kitchen.

“One thing I have learned from this trip to Texas,” said Baker, “is that any response team needs to be flexible. We never know what needs we will encounter when we hit the ground.” The teams removed sheetrock, ripped out wood and tile floors, and prepared homes to start the rebuilding process. They saw houses that, from the outside didn’t look like they had any damage. Inside a house, you could see some water damage, such as stains on the walls, but “we would rip out a floor, and it was just mush underneath. We took off sheetrock, and it was all black mold behind it,” said Bochman. 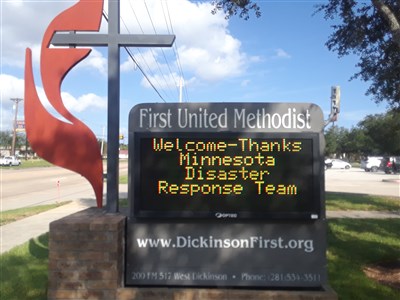 In addition to fixing homes, Klason pointed out that the ERTs spend a lot of time sitting and listening to homeowners and survivors tell their stories. Klason sees this as part of the healing process. ERTs often work on houses of elderly or disabled people who have no one else to help them recover.

One team worked on a house whose owner, an elderly widow, didn’t have any other place to stay, so she was living in half of the house, and the team was working on the other half. “At the end of every day that we worked together, she asked if we could share a blessing with her,” Baker said. “It was a special moment for those of us who got to pray with her.”

“I felt that God was tugging at my heart to respond to this hurricane,” said Baker. Bochman added that he believes God calls us to serve one another in whatever capacity we have available. “They will know we are Christians by our love. This is a way to silently witness.”

Bochman has seen that members of ERTs come back feeling like they received more than they gave. People out on their first ERT trip especially report that the feeling of gratitude from the communities they served will bring them back to serve again. “Part of the joy of this work is meeting people in the community,” agreed Klason. His team attended two local United Methodist Churches while in Texas, and were given standing ovations. Local churches brought them 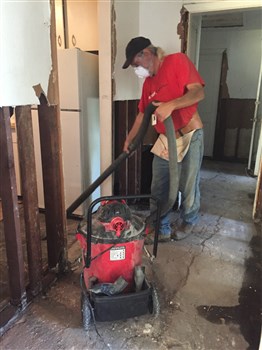 meals and shared their stories of loss and recovery with the team members.

All Minnesota United Methodists should be proud of the way our churches are responding to Hurricane Harvey and other recent disasters, Klason said. But he adds that many people don’t know that the Early Response Teams exist until after a disaster strikes.

Since ERTs respond soon after a new disaster, they need to be trained and ready before a disaster happens. Klason, Baker, and Bochman all encourage people to consider signing up for a special ERT training session so they can be ready to respond to the next disaster. Trainings happen throughout the year. Minnesotans can register now for the next training session on January 20, 2018. Contact Rev. Paula Colton, the Minnesota Conference’s disaster response coordinator, with any questions about Early Response Teams.


Karla Hovde is the communications specialist for the Minnesota Annual Conference of the United Methodist Church.