When most people think about General Conference, they picture the 864 elected delegates who sit on the plenary floor and have voting rights. But thousands of visitors also attend to advocate for specific causes, volunteer, or connect with brothers and sisters in Christ from around the world.

More than a dozen visitors from Minnesota are in St. Louis this week, and many of them briefly shared why they made the trip and what their hope is for the next three days (watch for an article later on about more Dakotas and Minnesota United Methodists who here as part of a team preparing to host General Conference in Minneapolis in 2020):

Rev. Becky Sechrist: “I came because I’ve always had a dream of being at the General Conference where things change for LGTBQ issues,” said Sechrist, who serves Minnehaha UMC in Minneapolis. “What I would love to have happen is that LGBTQ people are able to be candidates for ministry and fully ordained and that clergy can do same-sex weddings the world over.” But because she doesn’t think that’s a likely decision delegates will make, Sechrist hopes they choose the One Church Plan. “I would like there to be places where people can be out and then for other folks to be able to see that the church didn’t fall apart,” she said. “There are some amazing folks out there doing some incredible ministry. We really are all in this together. There has to be some space for that.” Being in St. Louis and seeing firsthand the decisions made will also help her interpret the decisions and their implications back to her congregation, said Sechrist.

Rev. Rob Moorlach: This is the fourth General Conference at which Moorlach, who serves Jackson UMC, has served as a page—which he describes as a “glorified gopher.” In that role, he delivers messages, runs errands, and does a wide variety of tasks that differ each day. On Saturday, he handed out translation devices at the interpretive services desk. Another day, he might be taking notes on the plenary floor. “You get a real flavor of General Conference,” he said. “I love to serve and see the whole United Methodist Church.” His hope? “My realistic hope is that we hear each other, that we really spend time listening to each other,” he said. “I think we spend a lot of time talking past each other and whether you’re liberal, conservative, in the middle, on either edge, I hope we can say, ‘I understand your story—we may disagree but I understand your story.’”

Rev. Michelle Hargrave: “This is a critical moment in the church,” said Hargrave, who serves Centenary UMC in Mankato. “I love the church, and I want to be here for it.” Hargrave said she favors the One Church Plan because it “gives us the most gracious space to continue the richness of our relationships with one another and would give me as the pastor of a reconciling church the space to do the ministry that we need to do.” Hargrave serves on the Minnesota Conference’s Human Sexuality Task Force and is helping to plan the clergy all-day gathering in March, which will focus on moving ahead after General Conference. She believes that being at General Conference will help her in both of those roles—and will assist her in communicating what’s next to her congregation. “We’re going to continue to stand with our LGBGTQ neighbors, but it makes it harder to minister to people when we say ‘we support you but we can’t fully support you,’” said Hargrave. “There’s a dichotomy in that that peo 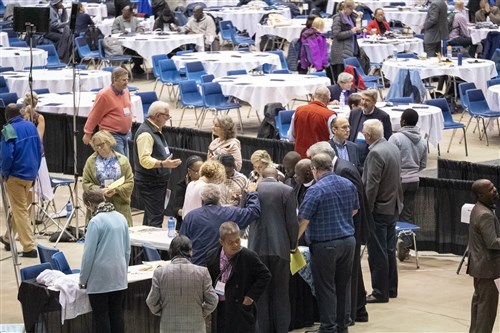 Riva Tabelisma: Tabelisma, the youth pastor at Spirit of Hope UMC in Golden Valley and a student at United Theological Seminary of the Twin Cities, is in St. Louis because of her role as a board member of the National Association of Filipino American United Methodists, an ethnic caucus. The group is launching a new initiative that focuses on both ministering to older Filipino United Methodists and finding new ways to include the next generation of Filipino Americans in the life of the church. Her hope for the rest of General Conference is “for people to understand that staying together is part of our DNA as United Methodists.” Tabelisma said that as a minority living in the U.S., she understands how it feels to be viewed as “other” and hopes delegates will see past the issue that divides them and embrace the people behind the issue. “I would hope for every United Methodist to realize that we are all Christian, which means that we should follow the teaching of Jesus Christ to love each other,” she said.

Rev. Susan Mullin: Mullin, director of faith formation of Faith UMC in St. Anthony, has mixed feelings about being in St. Louis but ultimately wanted to come because she’s hopeful that this might be a historic moment for the church. In addition to observing proceedings, she’s also done some volunteering with the Love Your Neighbor coalition. “I feel like I can’t have what I think we need,” she said. “But I do hope that we can pass the One Church Plan because it will give us all space to be in the church together. For me, that would allow us to still be family.” Mullin hopes that delegates will acknowledge disagreement and allow space for disagreement.

Rev. Walter Lockhart: Lockhart, who serves Simpson UMC and Walker UMC in Minneapolis, has been working toward full inclusion in the church for more than two decades. “I wanted to be here so that if in fact history is made, I am in the room,” he said. He prefers the Simple Plan and said he hopes the denomination takes an important step that he believes will invite more young people into The United Methodist Church. “I am convinced that sometimes when humans plan, God laughs at us,” he said. “I’m looking for the laughter for us right now. I’m really hoping that with all of the prayer, all of the listening to one another, all of the work that’s been done to work for justice, the Holy Spirit will move us to something we can’t predict today.”

Rev. Bruce Robbins: Robbins, a retired pastor and longtime advocate of full inclusion within the church, said he mostly came to see United Methodist friends who are dear to him. “My hope is that somewhere in this set of days, delegates have some compassion for those they disagree with and aren’t consumed by fear or anger or despair,” he said. Robbins contends that The United Methodist Church used to have a majority of “compatablists,” meaning even if they didn’t agree with the rule of the church, they would participate in it and be comfortable there. “For whatever reason, so many of us have become incompatibilists,” he said. “We’ve become convinced that whatever we don’t believe is contrary to the gospel and therefore we can’t remain part of the same church…I hope some kind of light will shed upon us that will make us more understanding of the other. I think that it will take a lot of humility among people, myself included, who are convinced that what they’re standing for is right in order to move ahead.”

Dave & Judy Jerde: The Jerdes are in St. Louis to volunteer with the Love Your Neighbor coalition. “My greatest hope would be that we find a way within this church to truly welcome our GLBTQI siblings in full inclusion in this church in all facets,” said Dave Jerde, a member of White Bear Lake UMC (his wife attends Faith UMC in St. Anthony). “Just like me, they are children of God.” None of the proposed plans address inclusion as fully as Jerde would have hoped, and he fears legislative gridlock might prevent any decision at all. But he hopes that delegates respect one another as they make their decisions.

Rev. Bruce Buller, a retired pastor, is also present but couldn’t be reached in time for this article.