Kim Harris used to be shy. But you’d never know that if you met her today.

She’s bubbly and talks eloquently about the powerful ways in which God is at work in her life and the world around her. She credits United Methodist Women (UMW) with teaching her to move beyond her comfort zone and with helping her grow in her faith.

It was through UMW that Harris, a 14-year member of United Methodist Church of Anoka, learned about deaconesses—laywomen who are called by God to share faith in Christ through ministries of love, justice, and service. The more she learned, the more she was convinced God was calling her to follow this path.

Harris is one of 26 women consecrated as deaconesses at opening worship on Monday before the full General Conference body. (One man was also consecrated as a home missioner—the male equivalent of a deaconess.)

“These faithful servants act as agents of God’s invitation to those who may not know that they are indeed welcome at God’s party,” Deaconess Clara Ester told those in worship.

Just before the consecration, the 27 affirmed that they had been led by the Spirit of God to engage in lifelong work of love, justice, and service—and they vowed to be diligent in prayer, in the reading of the Holy Scriptures, in mutual relationship with the communities they serve, and in all other means of grace available to them.

Each candidate knelt on a bench while a stole was placed around her neck. “I consecrate you to a lifetime of Christ-like service under the authority of the Church,” Germany Bishop Rosemarie Wenner told Harris, who is now officially a deaconess.

“The gift God has given me is the ability to love people unconditionally,” Harris said. “God has given me grace and loves me in spite of my flaws. I see everyone as a child of God and know that God loves them as much as he loves me. Even if I don’t agree with everything they say or do or believe in, I know that we are the same, we are equal, we are all part of God’s puzzle.”

Deaconesses are consecrated just once every two years—and preparing to be commissioned is a multi-year process that involves an extensive application and the completion of five specific theology classes: Old Testament, New Testament, Theology of Mission, History of The United Methodist Church, and Polity and Doctrine of The United Methodist Church.

Harris has always been deeply involved in the life of her church—from working in the office to serving on the funeral and welcome committees to teaching adult spiritual growth classes to leading Sunday School classes to coordinating the church’s participation in Family Promise, which serves homeless families. It was while shoveling sidewalks at her church that she realized even a routine task could be a spiritual practice.

“Shoveling is a way of praying,” she said. “With each shovelful, I think of and pray for a family as I move the snow.” 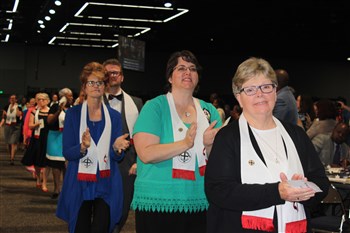 Harris has also long been involved in her church’s UMW. Eventually she became an officer for the Big Waters District UMW, and was later elected vice president for the Minnesota Conference’s UMW. It was at the 2014 national UMW Assembly that she took a deaconess discernment class and felt called to that role.

Harris, who is married with three adult children, said being a deaconess amplifies the work she’s already doing and solidifies her commitment to love, justice, and service. And love is an important part of her vocation. She works at Kids & Company, which is housed within her church and provides before- and after-school care for children ages 2-1/2 to 11. She cares deeply about sharing God’s love with the children she works with.

“You have to love everything about them and hopefully teach them to love and care for one another,” she said. “It takes a village to raise a child and take them from early education to being ready for school.”

Being a deaconess, Harris said, is ultimately a way to give back and share her gifts with others.

“I do what I do because of the gratitude I have for our God and all the blessings that He has given me throughout the years,” she said.