Who were the Minnesota United Methodist pioneers? Which churches were part of our conference long ago? What are the significant artifacts from our denominational history?

The answers to these questions just became easier to access thanks to a new archive online catalog containing documents, photographs, and other material from the Minnesota Conference archives.

“Our archive is mostly a hidden archive,” said Kathy Johnson, the Minnesota Conference archivist. “It is rich in our organization’s history and rich in Minnesota history. But it’s been difficult to get the word out that we have an open archive. Anybody can come in and access the materials whenever they wish. This was a way to take a step into the digital realm and make the materials more easily accessible.”

Johnson said the conference has always had an in-house database to keep track of archived materials. When it was time to upgrade to new software, she thought one that had an online component seemed worth exploring. A grant from the United Methodist Historical Society of Minnesota helped make it possible to pursue that option.

“The archive is one way to see how God’s been faithful to Methodist, Evangelical, and United Brethren people for the last 160 years,” said Johnson.

You can access the online catalog by visiting http://minnesotaumc.pastperfectonline.com. There, you can search for a specific topic or person, or click the “Photos,” “Libraries,” or “Objects” tabs to see more complete lists of what’s available. Each item accessed online has the option to be emailed to a friend—or you can submit feedback about it. There are currently about 700 items in the catalog, and Johnson is adding more every week. 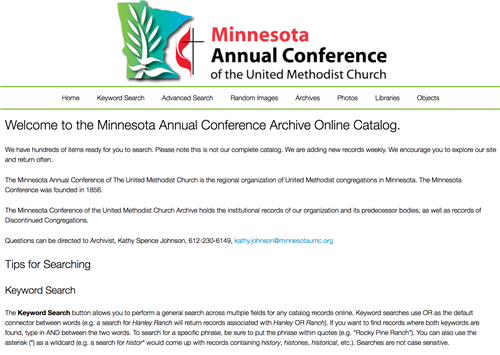 There are four types of items in the online catalog: objects, photographs, archival material (institutional records, closed church records, and other paper documents), and library material (historic books that talk about Methodism and Minnesota Methodism).

“I see this as a teaser to entice people to contact us to ask for more information,” said Johnson, adding that there’s way too much material to put every single item online. The hope is to add bits and pieces to the online archive so that interested people can learn some—and then contact Johnson for more.

Material in the Minnesota Conference archives has been collected over the course of many decades. Items often come to Johnson after a church closes. But relatives of clergy who have died also frequently pass along records and other interesting items for the archives. Due to privacy concerns, information about deceased individuals typically doesn't become available until 70 years after their death.

People within and outside of the conference also request access to items on a regular basis. Sometimes it’s for a history project they’re working on; other times, it’s to gain insight into the life of an ancestor or even to help with research for a book.

PastPerfect, the online catalog provider, is used by many small town and county historical societies. It’s also used by the American Swedish Institute. Johnson likes it because it has a simple platform that’s easy to use.

Samples of what’s in the online catalog

To demonstrate how the catalog works, Johnson has selected three interesting items to highlight: 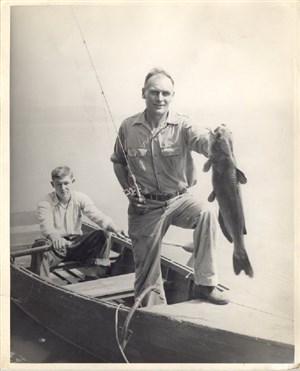 Frontenac postcards
Frontenac Camp was purchased by the Annual Conference in 1939. Located on the shores of Lake Pepin, it provided a picturesque camp setting in southeast Minnesota. The camp was sold in the 1980s.

Sermons of Rev. Sydney Richards
Rev. Richards, born March 29, 1899, was recruited to the Minnesota Conference and admitted on trial in 1920. He became a deacon in 1922. He served churches in Minnesota until 1945, when he transferred to the North Dakota Conference. He then served churches there and became district superintendent in 1950. He died in 1952.