By: Christa Meland, with contributions from UM News

Citing strained finances and denominational uncertainty, United Methodist bishops organized a public webinar on Feb. 13 to lay out their case for urging no U.S. bishop elections until 2024. The webinar was open to anyone but specifically targeted General and Jurisdictional Conference delegates—who will have the final say on the number of U.S. Bishops.

Sixteen of 46 active U.S. bishops—more than a third—plan to retire as soon as possible or already have taken on new roles with the Council of Bishops. All five jurisdictions have retiring bishops.

“The Episcopal Fund has little wiggle room,” Bishop Cynthia Fierro Harvey, president of the Council of Bishops, said during Saturday’s webinar, adding that unlike local churches, the fund has little to no programmatic expenses to cut.

Minnesota and Dakotas Conference delegates met in a virtual breakout room after the presentation to discuss opportunities and implications related to the possibility of halting bishop elections and questions that remain.

One of the key reflections of the group is that the Dakotas-Minnesota Area is in a strong position to be able to adapt to whatever decisions are ultimately made because of the current episcopal arrangement that represents a new model for The United Methodist Church. At the end of December, Bishop Bruce R. Ough retired from his role as resident bishop for the Dakotas-Minnesota Area. And in 2021, the area is being served by two interim bishops—with Bishop David Bard, resident bishop for the Michigan Conference, having primary oversight of Minnesota, and Bishop Laurie Haller, resident bishop for the Iowa Conference, having primary oversight of the Dakotas.

“Our whole denomination is having to look at the structure of the episcopacy,” said Rev. Carol Zaagsma, who serves Portland Avenue UMC in Bloomington and is Minnesota’s sole clergy delegate to General Conference. “It’s exciting to think that our relatively small conference is on the forefront of some of this experimentation. We’re getting to test the waters in what might be valuable models for the rest of the denomination and other jurisdictions going forward.”

Dave Nuckols, head of the Minnesota delegation and a member of Minnetonka UMC, pointed out in the breakout session that being part of a two-conference episcopal area for the past eight years has also given the Dakotas and Minnesota a unique vantage point for the conversations the denomination is now having.


“I think in many ways we are ahead of other areas and conferences because of our experiences with one bishop for two conferences across the Dakotas-Minnesota Area,” said Nuckols, Minnesota’s sole lay delegate to General Conference.

At the same time, Dakotas and Minnesota delegates voiced some concern about being in somewhat of a holding pattern with both conferences having interim bishops this year and not knowing what episcopal leadership will look like in 2022 and beyond. Some favored electing one bishop during this quadrennium to replace the two in the North Central Jurisdiction (NCJ) who recently retired—which as of last year was also the recommendation of the NCJ Committee on the Episcopacy and the NCJ College of Bishops.

Finances were a key topic that drove the webinar and the bishops’ recommendation to not elect any new bishops during this quadrennium. But Zaagsma pointed out that the decision is a matter of balancing the financial outlook with the projected retirements and ministry needs of each area.

“The decision isn’t unlike what each annual conference has to do when you look at projected retirements and the number of congregations that have clergy leadership,” she said. “It’s about figuring out how to best configure the resources you have.”

The bishops’ case for no new elections

The cost for each U.S. bishop is about $285,000 a year, including not just salary and benefits but also their housing allowance and office staff.

Harvey acknowledged the fund was in jeopardy even before the COVID-19 pandemic strained economies around the world and offering receipts across the denomination.
In 2019, United Methodist financial leaders warned the Council of Bishops that without changes, the Episcopal Fund would run out of money by 2024. Giving was not keeping pace with the fund’s obligations and the fund was depleting its reserves.

Since then, the bishops formed their own task force to look for ways to move the fund toward sustainability. The bishops’ recommendation for no new bishop elections came out of the task force’s work.

Complicating matters is that the denomination appears to be on the verge of splitting after decades of intensifying debate over the status of LGBTQ Christians. The coming General Conference faces multiple separation proposals including the Protocol of Reconciliation & Grace Through Separation—a mediated agreement that, if accepted, would allow churches and conferences to break away to form a new, traditionalist denomination.

Harvey stressed the hold on bishop elections would only be an interim move.
“This was not a forever decision,” she said, “but a for-now decision until we have a better sense of which churches may choose to disaffiliate and who will remain.”

Big questions remain around how many churches, conferences or bishops would leave if the protocol won approval. 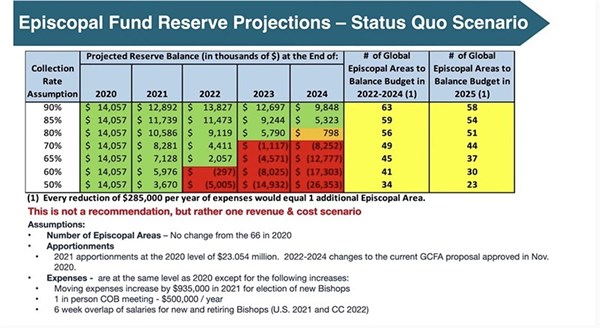 In any case, the General Council on Finance and Administration—the denomination’s finance agency—projects giving to decline significantly in the coming years.

The denomination saw a record amount of giving to general church ministries in December—nearly $39 million. Still, that left the Episcopal Fund with about 86.5% of requested apportionments in 2020—the lowest collection rate on record for the fund.

It remains unclear what a postponement in U.S. bishop elections would mean for how each jurisdiction handles episcopal oversight. Jurisdictions can merge episcopal areas so bishops oversee multiple conferences—as was the case for the Dakotas and Minnesota from 2012 to 2020.

Retired bishops can also serve in interim roles, with the Episcopal Fund covering the difference between a bishop’s pension amount and the current salary level. That’s currently happening in the Northern Illinois Conference, which is part of the NCJ. Retired Bishop John L. Hopkins has stepped in as interim bishop there for 2021 following the recent retirement of Bishop Sally Dyck.

Still, some delegates think a drop in 16 active bishops may not be necessary to keep the Episcopal Fund in the black.

Based on modeling from the General Council on Finance and Administration, the Northern Illinois Conference delegation estimates that the U.S. delegates could still elect 10 new bishops. The key, the delegation argues, is that conferences must pay at least 85 percent of requested apportionments annually.