Mid-day Saturday, while shoppers were making their way through Ridgedale Mall in Minnetonka, they saw something a bit unusual on the lower level outside of Macy’s: tables where people of all ages were assembling health kits for refugees—and signs inviting them to join in the packing, which many did.

The mission team at Messiah United Methodist Church in Plymouth came up with the idea and organized the “packing party” in an effort to reach new people and invite them to participate in hands-on service.

Between 11 a.m. and 2 p.m., 153 people collectively packed 1,300 health kits using supplies that Messiah UMC brought and arranged on tables. Church volunteers were there to provide instructions to shoppers and assist with assembly. Many church members showed up and brought their neighbors and friends, but at least several dozen people with no connection to Messiah also joined in the packing effort.

Members of a girls’ basketball team were among those who stopped by and started packing—and their participation created a shift. Seeing them prompted other children and youth to join in and made the opportunity seem approachable to people, said Kami Pohl, Messiah’s director of faith groups and missions. 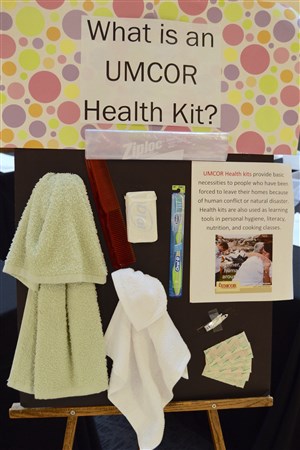 “It was a total Holy Spirit breakthrough moment,” she said.

A middle-aged woman was another person who took a break from shopping to participate. She told Pohl, “I don’t feel comfortable with church, but I would like to be invited to other things like this.” She will soon join an interfaith women’s group at Messiah as they pack additional health kits.

Health kits provide basic necessities to people who have been forced to leave their homes because of human conflict or natural disaster. Each kit includes a hand towel, a washcloth, a comb, a metal nail file or nail clippers, a bath soap, a toothbrush, adhesive bandages, and toothpaste (added in the country where the health kits will be distributed). The United Methodist Committee on Relief (UMCOR) distributes the kits all over the world, where they are needed most.

About half of Messiah UMC’s 2015 Christmas offering, or roughly $12,000, was designated for health kits for refugees. A group of members purchased the supplies and brought them to Ridgedale for the assembly. The church will assemble an additional 800 kits to add to the 1,300 assembled at the mall.

A member of Messiah’s mission team initially made contact with Ridgedale’s marketing manager in early November, not knowing if the church would obtain the necessary permission to execute their idea. The team was thrilled when the mall agreed to host the group at no cost, provided that they stayed within an assigned space, didn’t exceed a certain number of volunteers, and didn’t approach people to ask them to participate; shoppers had to come to them instead. 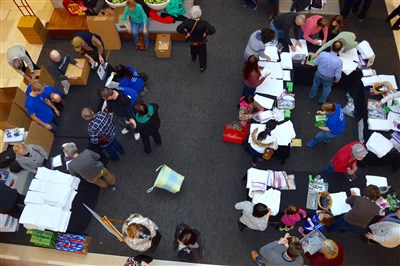 “Some people spent 10 minutes, some spent half an hour,” said Linda Seaton, a member of Messiah’s mission team and a key organizer. “It was an opportunity to engage in conversation…We have a goal to do more outreach within the community to connect with potential new members, people who don’t know about us. This helped us do that.”

For shoppers who stopped to pack, the event might have been a fun Saturday activity. But for Messiah UMC, the packing party was a way to answer God’s call to reach new people while engaging them in extending compassion to those in need and healing a broken world.

“I’m excited to see if we can do pop-up service in other places,” said Pohl. “Could we take it to a park? Could we take it to a farmer’s market? Where can you take it and serve where people already are?...Our job as a church is to not only do the work but give other people an opportunity to do it.”