Messiah UMC reaches children online (and you can too!)

Early on in the pandemic, when Messiah UMC in Plymouth halted in-person worship, leaders were pleased to see an uptick in online worship—which the church has offered for several years. But they noticed that one group was largely absent from virtual worship services: children.

They asked parents how they could better reach children in this unique season. Most wanted a short, on-demand online experience that they could fit into their schedules.

So the worship and children’s ministry teams collaborated in an effort to create a Christian experience for kids that was as engaging as what they might see on TV.

The church now releases one video segment every other Saturday at 9 a.m. via its YouTube channel and website. Called “Kid Street,” each “episode” is about 20 minutes or less, high energy, and has consistent characters that kids can become acquainted with over time. Parents, children, and the director of children’s ministries are all featured delivering the various worship elements—and kids are intentionally shown leading in various ways. (Watch the first episode here and the second episode here.)

“The big message is that God loves them, knows them, and wants to be in relationship with them, no matter who or where they are, as modeled by the life of Jesus so we can start the disciple-making process at this early age,” said Joy Ann Harmon, Messiah’s director of worship. “We want kids to want to watch it and parents to want to watch it and talk about the concepts so that we can get families doing the Christian journey together at home. Our understanding is that parents are most influential in impacting a child’s faith so we want to equip them with content that is engaging and faith-based to drive at-home discussions about faith.” 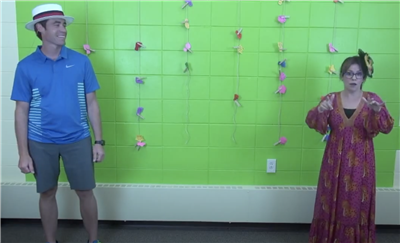 Often times, parents don’t know how to introduce their kids to Jesus and his teachings, said Harmon. Kid Street is a fun way to get the conversation going and to help parents it doesn’t have to be hard—and they don’t have to be a biblical scholar.

Two episodes have debuted so far, and each one has added new elements as creators have come up with new ideas. For example, the second episode has questions for kids to discuss with their parents after the message. In the third episode, they’ll be adding a “wiggle time” so families can get up and move around together. A sheep named DT (Double Trouble) will begin reappearing in an attempt to create relationship online.

Messiah is piloting five segments and then will evaluate next steps—but the initial reaction has been incredibly positive, Harmon said. Extended families, especially grandparents, have been watching Kid Street with their grandchildren.

Messiah’s leaders would love to see their Kid Street videos used by other congregations—especially smaller churches that aren’t able to offer their own children’s ministries or Sunday School amid COVID-19. The content is intentionally broad so as to appeal to a wide audience. If your church is interested in using Kid Street videos, contact Joy Ann Harmon.