Member of Delano UMC puts faith into action at work 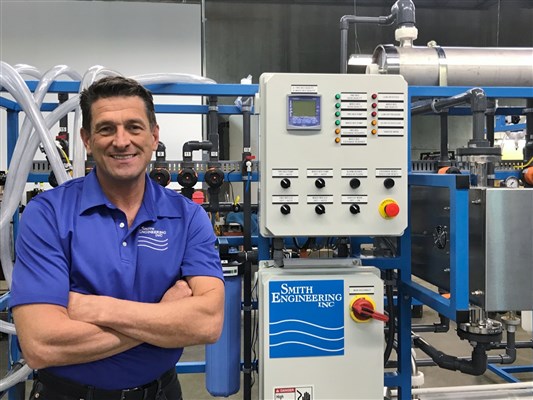 Bob Lucas stands next to the water purification equipment that his company designs and builds. Photo provided by Bob Lucas. 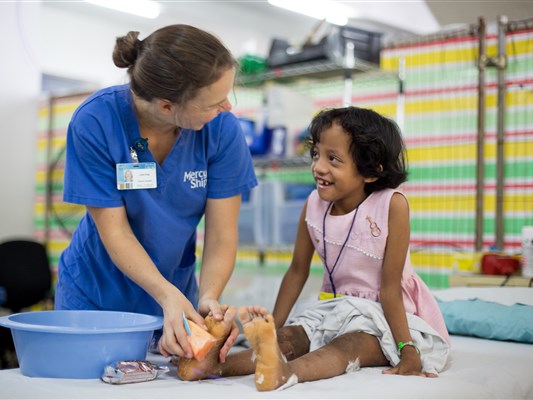 What do an engineering company in Minnesota and the poorest and sickest people on the coasts of Africa have to do with each other?

It turns out, quite a lot.

Bob Lucas, Smith Engineering’s vice president of operations and a member of Delano United Methodist Church, expected this to be a routine project for his company—until he clicked on a link in an email from Mercy Ships and saw a 60 Minutes clip about the organization. That video changed everything.

“I spent the whole day bringing people into my office and having them watch this video,” said Lucas. “By the end of the day, I had cooked up a plan and told it to my [business] partner, who thought I was off my rocker.”


Africa Mercy, the first and currently sole Mercy Ships vessel, is the world’s largest civilian hospital ship. In the nearly 40-year history of Mercy Ships, it has provided—for free—82,000 life-changing or life-saving operations to African people from a ship that doubles as a state-of-the-art hospital. Those operations include cleft palate repair, cataract removal, orthopedic procedures like club foot correction, facial tumor removal and reconstruction, and obstetric fistula repair (surgery for women after a prolonged or failed childbirth). The organization has also treated more than 147,000 dental patients and provided training to 5,900 local medical professionals. The floating hospital’s team of doctors, nurses, marine crew, and other workers are all volunteers.

Mercy Ships is an international Christian organization with a mission to increase access to healthcare throughout the world. It serves the poor, regardless of race, religion or creed, who most need medical attention—“in fact, primarily non-Christians because of the part of the world they are working in,” Lucas said.  Now, Mercy Ships is building a second ship to serve even more of the world’s poorest and sickest people. This new ship will be one-and-a-half times as large as Africa Mercy, with room for more operating suites and more patient beds.

Smith Engineering is donating a portion of the employee time to design, build, and install the equipment; making a $5,000 donation to the fundraising; and contributing to an employee donation matching program.

Meanwhile, Lucas is working diligently to spread the story of Mercy Ships in an effort to generate awareness and encourage other people and companies to donate. “There’s some ‘dare to be a Daniel,’ in this,” said Lucas. “I feel a bit like a prophet when I’m out telling this story. It’s impossible to tell this story and leave religion out of the telling.”

Of the $180,000 goal, Smith Engineering has raised nearly $43,000 from a mix of individual and corporate donations. Smith Engineering is also organizing a golf tournament and other fundraising events to boost that amount.

For Lucas, the opportunity to help the poorest of the poor in underdeveloped parts of the world is personal. As a young man, he served in the U.S. Marine Corps. He remembers his time in the Philippines, where he said he saw people with medical problems that are non-existent in the U.S.

“You can be empathetic to people,” Lucas said. “But until you are actually standing in the middle of it, you don’t really understand. Sometimes there is just no solution to help these people” without an organization like Mercy Ships.

Raising the money for the water purification system started as a fun idea. “Now I feel a lot of responsibility about it to come through,” said Lucas, who added that he has learned a lot about his faith since committing to raising the funds. “I’m a quiet Christian, and this has given me an opportunity to not be so quiet.”

Rev. Matt Sipe, who serves Delano UMC, pointed out that there are three gospel imperatives that the Minnesota Conference is working on—one of which is to heal a broken world.

“This is a way one person in our congregation is putting that into action,” Sipe said, adding that the work Lucas is doing “will bring a lot of healing to a lot of people.” Sipe pointed out that, as Christians, we do many different acts of charity. “We do a little thing here, a little thing there… but here’s someone who saw how he could make a huge impact. This is discipleship in action.”

Lucas encourages fellow United Methodists to look for ways that they can use their expertise and careers to serve God. “That opportunity to exercise your Christian life in your work is always there if you look hard enough,” he said. “That’s living a Christian life.”