Sue Lehrer, a longtime member of Coon Rapids UMC, was deeply moved when she volunteered at Spirit River Community’s Matthew 25 food distribution in Isanti—so much so that she recruited her husband, her brother, her daughter, and two grandkids to join her. Others from her congregation were similarly impacted, with close to 100 church members participating in Spirit River’s ministry over the course of a year.

So when the pandemic hit and the Spirit River congregation had to put its ministry on hold, Lehrer felt called to bring it to her own church.

With no budget, she and fellow church member Wendy Dorholt got to work researching, recruiting donations and partners, and making a plan. The first food distribution took place in January 2021. Now, a year later, the ministry serves 440 families and involves roughly 60 volunteers each month—and it has completely transformed the congregation.

“We turned inside-out,” said Rev. Dianna Dunham Foltz. “It’s changing our fundamental shape…It took the boundaries off of the church and we’re not trying to redefine them.”

Getting the ministry off the ground was no easy task. Lehrer and Dorholt made countless phone calls and visits before securing the first food partners, the U.S. Department of Agriculture’s Farmers to Family Food Box Program and Every Meal. By the time the Farmers to Family program ended four months later, they had secured additional partners. Over the past year, 19 companies and nonprofits have supplied food for the distribution. They range from a local Starbucks and Panera to discount grocery stores to Catholic charity St. Vincent de Paul’s food surplus giveaway program. Bergin Fruit and Nut Company in St. Paul even began supplying candy and dried fruit that had reached 75 percent of its shelf life. 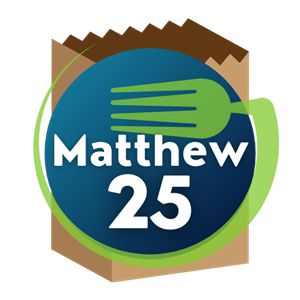 “This really never should have happened as it did because we have no money for this ministry, but through the grace of God and the faith we have, it continues to grow,” said Lehrer. “It’s just miracle after miracle…We are so grateful to be part of seeing what has happened here.”

The food distribution takes place from noon to 2 p.m. on the second Sunday of every month, following an abbreviated worship service. Volunteers spend the days prior to the giveaway sorting food and packing meals—which often include items like bread, sandwiches, fresh produce, pasta, rice, beans, oatmeal, and a variety of snacks. Foltz estimates that each family receives enough to make six full meals for four people.

On the day of the distribution, vehicles drive through the church’s back parking lot and stop at a “food island” the church has set up. Each family receives three bags of food, which volunteers load into the trunks of the vehicles. There are no questions asked and no qualifications to receive groceries. Occasionally recipients walk or bike through the line, and church volunteers deliver bags to residents in need who live in three nearby subsidized apartment complexes. Some of the recipients at those complexes have started attending Coon Rapids UMC, and others have knitted items that they’ve donated to the church’s “dignity pantry,” which supplies items to teens in need at the local high school. 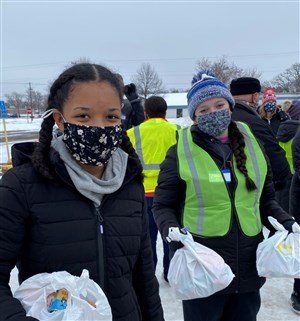 A recent component that’s been added to the giveaways is bikes, which one community partner supplies to anyone who requests one.

Foltz says the joy in the church building is palpable, and the congregation has received an infusion of new people and new energy.

“People used to think coming to church was how to encounter God,” she said. “We’re encountering God every time we participate in this ministry and we’re doing the work of Christ. Many people say they feel it’s a better way to worship.”

Coon Rapids’ Matthew 25 ministry was one recipient of last year’s Love Offering, a statewide collection that United Methodist churches across Minnesota give to mission projects both near and far. The church used most of those funds to purchase a commercial freezer so as to have room to store all of the frozen food items donated each month.

The Matthew 25 ministry recently received a grant for a community garden, which volunteers will plant this summer to expand offerings for food-insecure residents. And Lehrer and Dorholt will continue to focus on partnerships that enable the ministry to thrive and grow. 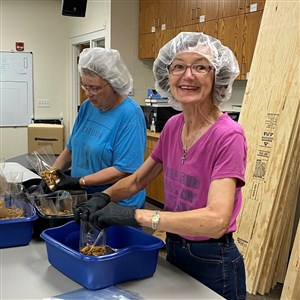 “We want our church to go serve the community,” said Dorholt. “We see the impact it’s making and we know that is the direction we want to go.”

Both she and Lehrer say the ministry has both expanded their view of what it means to be church and drawn them closer to God.

“My faith life has deepened,” said Lehrer. “I have learned to trust God through everything because of Matthew 25. This shouldn’t be a success. We had more obstacles than we ever thought we would have, but God has always provided…It’s just beautiful.”