Marj Evans-de-Carpio has been a professional Spanish-English interpreter for more than a decade. She’s also long been a committed United Methodist.

Interpreting and church are two of her passions, and the 2016 General Conference has given her an opportunity to combine them for the first time.

Evans-de-Carpio, a member of Grace United Methodist Church in Burnsville, is spending a week at General Conference interpreting for delegates who are native Spanish speakers. It’s a job she takes very seriously, and she prepared by reading a variety of United Methodist publications written in Spanish and creating a glossary of terms that are specific to the denomination—for example, apportionments.

You can translate the literal meaning of something, but if it’s a strange translation, it will be hard for the listener to understand.

There are about 150 interpreters present for the first week of General Conference, and during plenary sessions when all of the delegates are together, interpreters are simultaneously translating what’s spoken in English into eight languages. Non-English-speaking delegates hear the translation in their native language through headphones they are wearing.

Interpreters also translate in committee meetings, which comprise a large part of the first week of General Conference. Evans-de-Carpio is assigned to the financial administration committee.

There are booths in the plenary room and the committee rooms, and two interpreters for each language sit in a single booth together. The two take turns interpreting and switch off about every 20 minutes because of the amount of intense concentration required of the active interpreter. While one person interprets, the “backup interpreter” in each booth looks up unusual terms and jots down notes that could help create a seamless translation later on.

Interpreting, though, isn’t just about what’s said. It’s also about how it’s said. 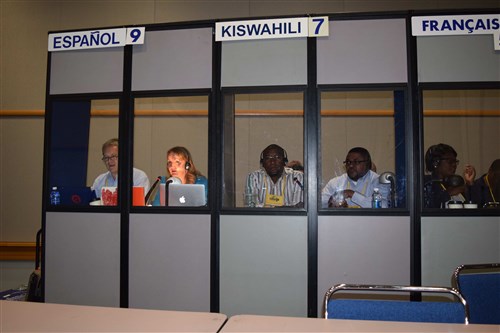 “If something is expressed with great fervor, even if you disagree with what the person is saying, you try to use the same fervor in your voice,” said Evans-de-Carpio, who has been involved with the Minnesota Conference’s intercultural competency training. “The person hearing it then not only gets the meaning of what was said but the tone of what was said. You replicate the experience of how somebody speaks.”

This is Evans-de-Carpio’s first time at General Conference, and one of her favorite parts has been getting to know other interpreters from around the world. On Sunday, she went to church with two French interpreters.

“It’s also exciting to be part of the global nature of the church that we don’t often get to see in our local churches,” she said.

One of the challenges for Spanish-speaking delegates and those who speak some other languages is that written General Conference materials, including legislation, weren’t translated into those languages, which made it difficult to prepare in advance.

Still, methods of interpreting at General Conference have evolved substantially since 1988, the first year that language services were provided. The list of languages simultaneously translated continues to grow, and the equipment used by translators and those receiving translations has become increasingly sophisticated.

For Evans-de-Carpio, General Conference has been a welcome break from her regular interpreting duties and given her a chance to see the United Methodist Church in a new way.

“Interpreting is a ministry of presence,” she said. “It’s very cool to be here.”