On Labor Day, about 150 people gathered to celebrate the groundbreaking of a new Tabernacle at Koronis Ministries Camp and Retreat Center in Paynesville.

In a moving worship service, the nine-decade lifespan of the original Tabernacle was remembered and celebrated—and those assembled prayed over and blessed the site of a new building that will be ready to welcome guests by spring 2019.

Dan Ziegler, director of Koronis Ministries, described the original building as a holy space where all who came found fellowship with each other and with the Lord, and where thousands of people were “challenged to orient their lives toward Jesus.” But the historic Tabernacle had no restrooms, air conditioning, ceiling fans, or heat, and it wasn’t able to be used year-round. Years of use had resulted in a leaking roof and a cracked foundation that caused water to puddle inside.

The new Tabernacle will be a multi-level, multi-use meeting and worship space that’s available year-round and has state-of-the-art technology, modern amenities, and full accessibility. So far, nearly $1.7 million has been committed to the project. A capital campaign is underway to raise the remaining funds needed for the $2 million building. Each Minnesota United Methodist congregation has been challenged to give at least $1,500 to help bring this vision to reality, and Ziegler reported that dozens of churches have already risen to the occasion. 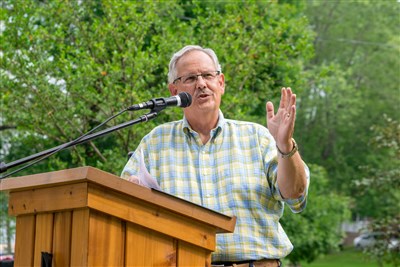 During the groundbreaking ceremony, Bishop Bruce R. Ough gave a sermon in which he encouraged those assembled to build on the legacy of the past as we move into a new era with the new Tabernacle.

One man who knows a lot about leaving a legacy is Dwight Rieke. He has attended Koronis for 91 of the 92 years he’s been alive.


“I’ve never missed a summer,” he said. All who attended the groundbreaking were encouraged to bring a shovel or garden trowel to help break ground. Rieke had “1928,” his first year at Koronis, written on his shovel. He attended the groundbreaking with his great-grandson, Chase, who enjoyed digging with his own little shovel. Rieke dedicated his life to Christ at the original Tabernacle, and it’s important to him create a new “hallowed place of worship” for Chase’s generation and those who come after.

Karen Craven has also attended Koronis since she was a baby and now owns a cottage on the Koronis grounds with her husband Bob.

“The old building was awesome, and it meant a lot to the older generation,” she said. “But the new generation needs to make their own memories.” She added that she and her husband are excited about the new building because “we know that what happens at camp changes lives.”

Craven is proof of that. She explained that there’s a book filled with the names of all of the kids who made a commitment to Christ at the old Tabernacle. It includes her own name.

Rev. Deb Marzahn, pastor at multi-campus Crossroads UMC and president of the 150-year-old Red Rock Camp, which uses the Tabernacle every year, told stories of how she has seen God touch the lives of those gathered in the original Tabernacle and what gathering there has meant to her family. 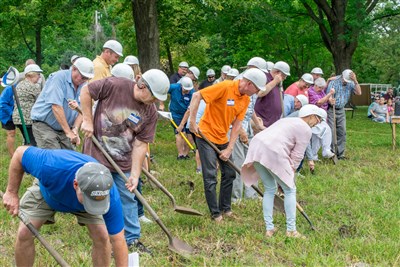 “Camp is an unparalleled opportunity, coupled with the movement of the Holy Spirit, to experience true Christian community,” she said.

Rev. Paul Marzahn, also a pastor at Crossroads UMC and her husband, added that the future Tabernacle is important to him because he wants to pass on the legacy of faith and family he received in the original structure.

“There’s not a lot of camps where I can bring my 85-year-old mom and my 4-year-old grandson and enjoy a great week of great programming and great fellowship, and Koronis is one of those kinds of places,” he said. His grandfather designed the original building, and now that he brings his grandson to Koronis, five generations of his family have a connection to the Tabernacle. “We’re able to receive this blessing because of those like my grandfather 100 years ago who thought about this place,” he said. “We’re doing this groundbreaking so we can continue doing this ministry for the next 100 years.” 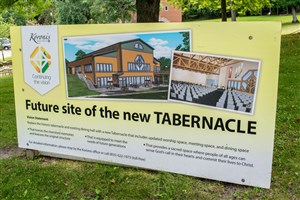 For Steve Knight, the Minnesota chair of the Dakotas-Minnesota Area Camp and Retreat Council, the most meaningful part of the groundbreaking event was “seeing the past and the future generations come together to consecrate this place and break ground with a vision for what we can do in the future.” Like most people attending this event, his faith was strongly shaped by his time at camp.

Ough concluded his sermon by reminding those gathered that “as we break ground, we are affirming we are still in the business of building on the sure foundation, which is Jesus Christ.”

Karla Hovde is the communications specialist for the Minnesota Annual Conference of the United Methodist Church.
News
print this article