This year, instead of holding VBS in the church building, it took place on a bus. This novel approach to VBS introduced new families to the church and resulted in more than double the number of kids in VBS as compared to previous years.

The wheels on the bus go ’round and ’round

Each evening during VBS, Rev. Rob Moorlach drove around the town and stopped at each of the four city parks to pick up kids. With the help of some of the church’s youth, he taught a Bible lesson as he drove to a different location each evening; those locations included a nearby state park, a neighborhood block party, and a local swimming spot. There, the kids had a simple dinner and played games. On the way back, Moorlach quizzed the children with questions about the Bible lesson, and they practiced a memory verse. He delivered the kids back to their families at the four city parks.

The theme for the week was “Jesus loves everyone.” While teaching a lesson on the Bible story about the woman at the well, Moorlach looked back in the bus mirror. “I could just tell that the kids were really listening to what I said,” he noted. “Normally you see kids fidgeting, but they were really paying attention and I could see them thinking, ‘Oh, that means Jesus really does love me!’” 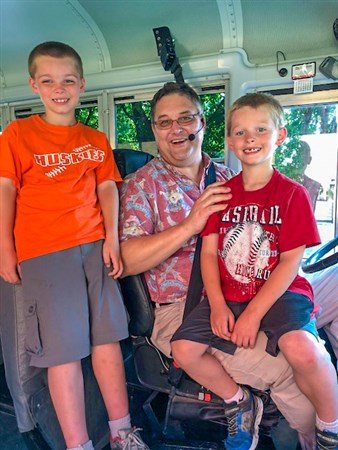 “I have to give credit to the kids that came and invited their friends and neighbors,” Moorlach said. “That’s what this is about: reaching out to our community.”

But most of all, he credits the Holy Spirit’s work.

“There seems to be a new sense of the Holy Spirit unleashed in our church and our community,” he said. VBS on the bus got the church thinking about more ways of­ getting out of the building and away from a “that’s-how-it’s-always-been-done” mentality.

For years, Jackson UMC, a congregation of about 55 people, had bought curriculum materials annually and hosted a traditional VBS in the church’s library. But Moorlach said the kids never really engaged with the Bible lessons, songs, and activities that went with the standard VBS themes. The number of children attending always hovered around eight or nine, and most of them were the same kids who came to Sunday School the rest of the year.

“It was very vanilla,” said Moorlach, who’s been at Jackson UMC for about five years. “It seemed like the same VBS I had growing up.”

Whenever Moorlach moves to a new church, he finds a way to get involved in the community by coaching basketball, substitute teaching, or, as was the case in Jackson, becoming a part-time school bus driver. He values the chance to live out his faith in an approachable way and to be a bridge for people in the community who don’t regularly attend church.

During a recent conversation with Rev. Fred Vanderwerf, the Southern Prairie District Superintendent, Moorlach talked about his role as a bus driver. Vanderwerf acknowledged that it was a good way to get to know the children and families of the community but urged Moorlach to figure out how to leverage that experience and get the community involved in the church. As the two were brainstorming, Vanderwerf suggested “Rockin’ Rob’s Vacation Bible School on the Bus.” 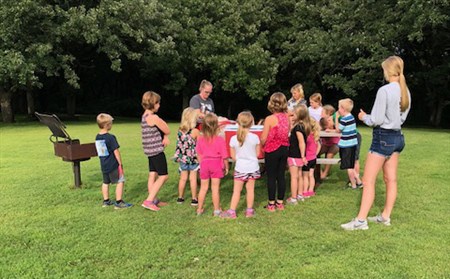 Moorlach brought the idea to his leadership team, and a plan began to take shape. The church printed flyers and posted them around town. The congregation’s kids invited their friends and neighbors. Moorlach bought a headset microphone with a little speaker, like bus tour guides wear, and some Bible lesson materials that had illustrations he could hold up from the front of the bus. The bus company he works for let him use a bus for just the cost of fuel.

Jackson UMC is nearly finished with Choosing the Faithful Path, a 10-week program offered by the conference that helps small congregations explore the next step God is calling them to take—whether it's merging, closing, or going through an intensive revitalization process. The congregation is choosing to focus on revitalization. Moorlach sees the success of the revamped VBS ministry as a first step in the work the Holy Spirit is going to do through the church.

His advice to other church leaders: Get deeply involved in your community, try something new, see where the Holy Spirit will lead you, and find out who you can reach!