A year ago, Rev. Laurie Kantonen took 10 members of Hubbard UMC to the Leadership Institute at The United Methodist Church of the Resurrection in Leawood, Kansas. Not only did they come back excited about ministry opportunities but they implemented some of the ideas they learned about—including a weekly prayer group, a breakthrough prayer initiative, and a program through which lay people provide pastoral care to the homebound.

When North Star District Superintendent Mark Miller saw the attendees’ excitement upon their return, he challenged them to plan a similar event for other churches in the district.

“I said, ‘We have two ingredients that the Leadership Institute had: a dynamic pastor and people who are full of hospitality—we can do it,’” recalls Carl Wall, one of those who traveled to Kansas.

‘A culture-changing experience’ for churches 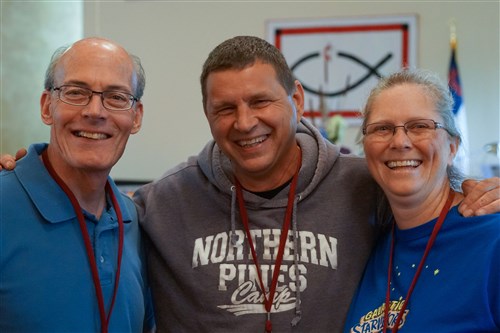 On Sept. 14 and 15, Hubbard UMC hosted a “Breakthrough Renewal Institute” that welcomed 200 clergy and lay people from 70 churches across the Minnesota Conference. (View photos from event.) The event included three dynamic worship services for all participants and 11 breakthrough workshops from which each attendee chose three. Workshops covered a wide range of topics, such as breakthrough prayer, streamlining church leadership, building an active youth group, small groups, preaching a series, radical hospitality, reviving social media presence, and Wednesday night offerings for families. Presenters were recruited from across the conference—some by Kantonen and others by Miller. Participant feedback has been overwhelmingly positive.

The event was so big that it extended beyond the church building. While some workshops took place at Hubbard UMC, others were at the local community center and in two old church buildings currently being used as a live theater.

“My hope is that there was at least one thing attendees went back to their churches really enthusiastic about—and that they share it and see that something positive can happen in their church,” said Kantonen. “I hope their participation can be a culture-changing experience for their church.”

The recipe to success 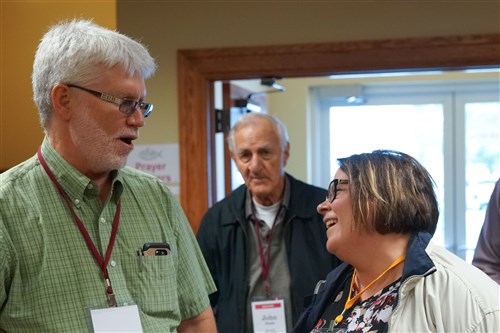 Hubbard worships between 80 to 100 for most of the year and roughly 200 in the summer. Leaders knew right away that creating a meaningful event would require all hands on deck, and they rose to the occasion. Approximately 100 members volunteered their time to assist with the event in a wide variety of ways.

Wall, a retiree and member of Hubbard UMC, volunteered to be the institute director. He created 10 committees, each with a chairperson and each one focusing on a core topic—facilities and transportation, technology, hospitality, communications, and others. Teams met regularly, and the chairs met monthly for an entire year to work out logistics.

“We saw our number one thing we were offering in this institute as hospitality,” said Kantonen, noting that the event was very much lay-led by people in her congregation.

The event was infused in prayer from the very beginning. Hubbard UMC created a prayer tree with the names of all the churches in the North Star District. Several months before the institute, individual members took one or several of the names home and committed to praying for those churches.  Additionally, because the institute started at 4 p.m. on a Thursday, members of Hubbard UMC set alarms and stopped what they were doing at exactly 3:59 p.m. on the four prior Thursdays and prayed this prayer:

Dear God, help us as we prepare to host September’s Breakthrough Renewal Institute. Be with us as we open our hearts and minds to all those seeking hope and renewal in their ministry. Break through our fears and concerns, enabling your Holy Spirit to guide us during this extraordinary time of listening and learning, sharing and worshiping together. We cannot do this alone, but we know that with you, all things are possible. May we use this time of shared fellowship to carry out your great commandment: “love one another.” Amen.

During the closing worship service at the institute, participants were invited to fill out a commitment card noting something they’d bring back to their church and do. A prayer group at Hubbard UMC will spend the next few months praying for all those who made commitments—and then send the commitment card back to each person who wrote one, along with a note asking how they’re doing with their commitment. 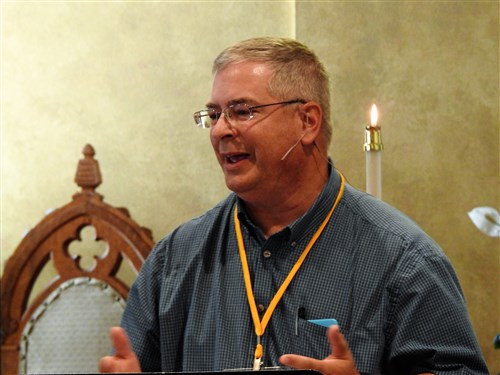 Kantonen said part of what laid the groundwork for the church to host the institute was its involvement with the conference-wide Reach • Renew • Rejoice initiative for congregational development. Several years ago, the church was asked to consider a tithe goal (pledging 10 percent of annual income over a five-year period) but members instead decided to commit to a double tithe goal and give 20 percent. They understood that they were investing in something that would benefit their children or grandchildren or great-grandchildren because even if they didn’t grow up and live in Hubbard, there would be stronger, healthier churches across the state.

“If you have people who will really commit themselves, you can do anything,” said Kantonen, reflecting on both the double tithe goal and the success of the Breakthrough Renewal Institute.

Wall said the goal of the institute was to refresh, renew, and revitalize churches through the individuals who attended.

“When they left on Friday afternoon, I hoped that they would have that intangible feeling of not just being inspired but being inspired to action in their own situations,” he said. “We wanted people to feel like they’re special children of God through a fellowship of believers and the sharing of ideas that make them expand and grow in their own faith and, most importantly, in their churches back home. That’s the atmosphere I believe we did create.”