It all began about a year and a half ago when Liberian couple Emile and Rose called Fridley UMC to ask if they could be married there. Rev. Wayne Swanson told them yes, but asked them to attend a worship service at the church first.

They did—and not only did they get married at the church, but they kept coming back for worship and became members a short time after their wedding.

One day, Rose talked about how she sometimes felt alone because there wasn’t anyone else like her at the church. Bob Brice, Fridley UMC’s associate pastor, listened intently—keenly aware of the fact that Minnesota has some of the largest Somali, Liberian, and Hmong populations in the country, and that a huge number of Liberian people live within seven miles of the church. Brice also knew that his beloved congregation didn’t even come close to reflecting the demographic makeup of the surrounding community, and he had a strong desire to change that.

So he asked Rose, “What would we need to do to reach out to more people in the Liberian community?”

Rose listed three things: The service time would need to be later, 11 a.m. or after. The music would need to be more contemporary and louder. And, she said: “Don't invite people to church and then try to show them how to be like you; instead learn about who they are.”

Brice noted that a contemporary service was coming up on the fifth Sunday of the month and asked if Rose would be willing to help get the word out in the Liberian community. She did, and 20 people visited that day because of her invitation. This was more visitors in one day than the church had seen over the entire past year. Fridley UMC’s leaders knew something remarkable was happening. 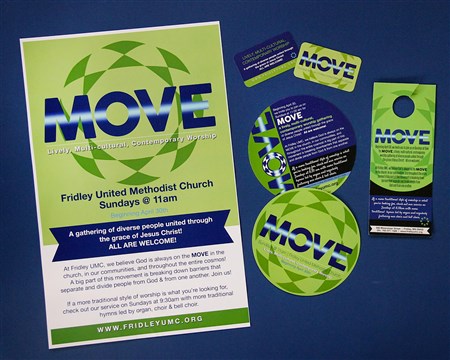 Rose, Brice, Swanson, and their families had dinner together that same night, and when asked why she and her husband kept coming back to Fridley UMC, Rose said: “We were truly welcomed [the first time we visited], we heard the gospel preached that day and every Sunday since, and I really feel like I’ve been called to help Fridley UMC start a second service that will focus on reaching out to the Liberian community.”

And that’s just what she did. On Sunday, Fridley UMC debuted a new service called “MOVE.” Rose invited her Liberian family and friends, and people from the congregation hung posters all over the community, distributed flyers, and knocked on 250 doors near the church, inviting their neighbors to check out this new worship service.

Ninety-three people came to the first service—about half from the Liberian community. Many of the other attendees simply wanted to see what this new service was like and try something different from traditional worship.

The new service incorporated Rose’s suggestions. It started at 11 a.m. Modern songs replaced hymns and were played loudly (“This is Amazing Grace” by Phil Wickham, Hillsong’s “For Who You Are,” “Great Are You Lord” from All Sons and Daughters, and “God is on the Move” by 7eventh Time Down). There was a video testimony. And people walked up to place their offering into the offering plate, as was customary in Liberia.

“Instead of pretending that cultural differences don’t exist, we want to celebrate the differences as a way to show the great diversity in God’s creation,” said Brice.

Brice, Rose, and those who attended the first MOVE service are waiting with great anticipation to see what’s next. But one thing is clear to them: God is moving in new ways at Fridley UMC and its people are feeling and following the work of the Spirit.

“People in our congregation are stepping out in faith and believing that the Lord is truly at work in this,” said Brice. “This is the most exciting thing that I’ve been part of.”

Starting a new service at your church

Is your church ready to start thinking about launching a new service or a new site to reach new people? If so, contact Rev. Ben Ingebretson (616-481-7566), Dakotas-Minnesota director of new church development. He can provide guidance and strategies to help you be successful.