After two years of including a snow pants giveaway with North Highland UMC’s Coats for Kids (and Other Folk) project in Aberdeen, South Dakota, the mission committee was faced with a dilemma. With the previous year’s increased coat needs and facing a likely increased need this year, should they reconsider giving away snow pants?

“We felt overwhelmed,” said Kristie Scherbenske, mission committee chair. “We discussed and decided to offer the elementary school counselors a certain amount of snow pants that they could give to children who had none, and we would focus on coats.” Pastor Lou Whitmer explained “We met with several of the counselors who accepted the plan, but were somewhat disappointed."

Then, as God-things go, they just happened to be in the midst of a sermon series built around the See All the

People campaign of Discipleship Ministries. The text for the coming Sunday was the story of the loaves and fish from Luke’s gospel. “We took note that just prior to this story, the disciples had recently returned from proclaiming the good news,” recalled Whitmer. “Jesus had empowered and equipped them, and they had done many good things. Yet when faced with the challenge of a crowd in need, instead of seeking Jesus’ thoughts, they simply told Jesus to send them away." And so the question was posed to the congregation: "Have we asked Jesus what we should do about snow pants?”

Seven people from the mission committee were invited to line up in the aisle, each holding one of five coats and two hats. Whitmer offered a prayer asking for the Holy Spirit’s guidance for the mission committee in discerning this year’s project, and that the resources the church currently had would be multiplied so there would be enough to meet the needs. “You could feel the presence of God; it was as if Jesus was saying to us, YOU give them snow pants,” said Scherbenske.

The following worship, a young mother stepped up to take over the snow pants portion of the project, and within days there was a call from a local corporation asking if they could collect winter gear among their 500 employees. They then provided $500. A 4-H club heard a radio announcement about the project and brought in $200. When committee members asked a local charitable organization if they had interest in giving, $600 was handed over within minutes. A law office staff offered $100, a local coffee shop gave a percentage of October sales, a regional entity brought in 40 brand new children’s coats, and members of the congregation once again stepped up. Bath UMC in Conde, South Dakota also came in with a big bag of new coats and hats. 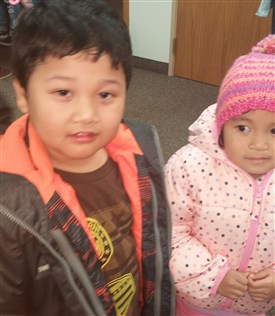 “It was a miracle at work opening hearts to share,” said Whitmer. There was enough money to purchase countless coats and well over 100 pairs of snow pants, and they received hundreds more caps and gloves than in any previous year.

“Every child who needed a coat or snow pants has received them between the giveaway and filling needs this week”, said Nelda Linares, committee member. Ardell Fiedler commented, “We all noted the gratitude and joy of the receivers.” First time coat-fitter Jenna Hoose added, “It was the best day ever!”

This year the committee had informational posters translated into different languages and sent them to the major local employers of persons of diversity. The guests were greeted with welcome signs in four languages. All of the remaining adult coats were taken to Tree of Life Ministry Center, a ministry to Native Americans in South Dakota. And just as in the story of the loaves and fish, there is enough left over to meet the needs and calls that will come in over the next few weeks.