“For us, this was unacceptable.” said Klepper, director of Christian education. So the following year, Evangel UMC decided to try something different. Instead of the traditional VBS with an out-of-the-box curriculum, the church began something called Mega Sports Camp (now called Mega Kids Camp).

Now in its fifth year, Mega Kids Camp is a successful and growing children’s ministry for kids from pre-K to sixth grade. In 2013, its first year, the camp attracted 101 kids, and by 2017, 270 kids and 105 volunteers participated in the four-day event.

“This all started from a sad moment,” Klepper said. “We saw that we needed to break down walls. We needed to get out of the church setting…We’ve just kept breaking through walls.”


Every day of camp includes activities in one of several tracks that each child chooses from, along with exciting music, riveting bible lessons, playful skits, and moving sports stories. Additionally, Klepper brings in local baseball and hockey team mascots to interact with the kids. Each year, the camp invites an athlete “celebrity” who is also a Christian to talk about sports and faith. This year’s athlete was Ben Utecht, who was tight end for the Indianapolis Colts when they won Super Bowl XLI in 2007. (Video: Watch some highlights of this year’s camp.)

The camp, which meets for about three hours a day, has evolved since its inception. In the first year, children got to pick between four sports tracks, like soccer or basketball. But Klepper learned that there were kids needing the gospel who didn’t like sports, so the camp added a variety of tracks that would appeal to children with diverse interests. The camp now includes three sports tracks, one creative arts track, and two technology arts tracks. This year, a new “adventure track” included activities like laser tag, a climbing wall, and soccer in giant plastic bubbles, and a horseback riding track included trail rides at a nearby Christian ranch. 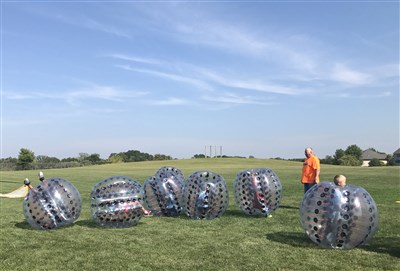 Since community outreach is so important in order to attract new campers each year, Evangel UMC holds Mega Kids Camp outside of the church. Leaders found that some families feel more comfortable in a high school setting than a church building. There, campers have access to many indoor courts and a large green space outside. To reach as many people as possible in the surrounding neighborhoods, the church promotes the camp with door hangers, yard signs, personal invitations, and through local news coverage.

Evangel UMC also funds a no-questions-asked scholarship because “there’s nothing we won’t do for children to have a relationship with Jesus Christ,” said Klepper. Of this year’s 270 participating kids, 55 could not pay the $25 camp fee and received a scholarship.

Evangel has a strong history of children’s ministry and Christian education ministry. “Members give not just with their checkbooks, but with their hands and feet,” Klepper said. An annual rummage sale brings in thousands of dollars for the camp, but members give generously to the scholarship fund, make up the bulk of the 100-plus adult volunteers, and some even take vacation time from their jobs to participate. 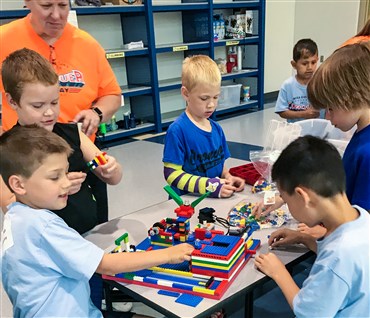 Other churches of various faith traditions have sent children to Mega Kids Camp, but some are now starting to partner with Evangel to actually host the camp—and Klepper looks forward to expanding those partnerships in the future.

To continue making connections with the families of the kids that attend Mega Kids Camp, the church collects email addresses and sends out invitations for other church events throughout the year, like trunk-or-treat, an Easter egg hunt, and next year’s Mega Kids Camp.

On the last day of Mega Kids Camp, participants are asked if they are ready to say a prayer asking Jesus to be their Savior. Kids raise a hand if they are interested, and the leaders make note of who raises their hand. After the camp, Evangel sends letters to the parents of kids who raised their hand. The letter provides the opportunity for follow-up care, invites them to talk with their child about their interest in following Jesus, and encourages them to bring the child to a church.

Klepper knows that this ministry has been blessed by God since the beginning.

“I like to say that this camp, it’s a beast, but it’s a wonderful, anointed beast,” he said. “It’s so obvious that it is the Holy Spirit, not us, leading this. It’s so much bigger than we could have ever done on our own…Our whole purpose is to meet children and families where they are at, and to share Christ in hard-to-reach places.”

To learn more:
For more information about Mega Kids Camp, or to learn about how to start one at your church, contact Jim Klepper (507-316-3248), director of Christian education at Evangel UMC.
________