By: Christa Meland, with contributions from United Methodist News Service

Petitions meant to address pensions and the Traditional Plan topped the list of priorities for what General Conference delegates will work on in their legislative committee—and Minnesota delegates, most of whom have voiced support of the One Church Plan, responded to the day’s events with both disappointment and hope.

This was a key vote as delegates to The United Methodist Church’s top lawmaking assembly try to set the direction in the denomination’s longtime debate over homosexuality.

By 56 votes, the Traditional Plan topped the One Church Plan in terms of what delegates decided they want to address first in the two remaining days of this historic gathering (they have not yet voted on either plan—just the order in which to discuss and consider them). The One Church Plan is supported by a majority of the bishops.

The Traditional Plan was second behind pensions, and the One Church Plan was fifth behind legislation that deals with disaffiliating churches.

“We know there’s still much work to be done,” said Rev. Judy Zabel, a Minnesota clergy delegate who serves Hennepin Avenue UMC in Minneapolis. “But let’s not lose hope.”

The key message she wants to tell people back home: “Wherever you are in your decision making and thinking about the way forward, this is God’s church, and whatever happens at General Conference, we must continue our mission to make disciples of Jesus Christ for the transformation of the world. We do that in different ways all over the state of Minnesota and we will continue to do that with vitality and passion.”

The Traditional Plan would strengthen restrictions against officiating at same-gender unions and being “self-avowed practicing” gay clergy. The One Church Plan would leave questions of same-sex weddings up to individual clergy and congregations. 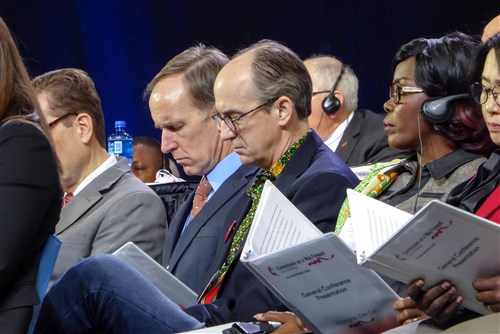 Dave Nuckols, a Minnesota lay delegate who attends Minnetonka UMC and a member of the Commission on a Way Forward, had mixed emotions at the end of the day.

“We are clearly on the brink of schism and the One Church Plan is our hope for pulling back from that,” he said. “I’m realistic about what we are facing but I’m not discouraged. I remain optimistic that we can win the argument at the end of the day.”

“Many of us are using tonight and our breaks to further our discussions person to person,” he said. “The coalition that’s organizing support for the One Church Plan is changing its strategy based on what we’ve learned today.”

Nuckols reiterated that he remains optimistic and said that no matter what happens at General Conference, “we’ve made great strides in the American church toward inclusion”—and he wants Minnesota United Methodists to “keep the faith and keep the prayers coming.”

“I’m a little disheartened because I’m concerned that the Traditional Plan looks to be more popular than the One Church Plan, and it is less good for Minnesota,” he said. “I think the hope would be that there could be conversations happening on the floor or off the floor to understand the affects the Traditional Plan would have on conferences like Minnesota, where we are trying to create space for all in the church instead of having an exclusive theology.”

Ozanne noted that there was also strong support for the One Church Plan, and he was encouraged by that.

“I am always hopeful that we can be united,” he said.

Delegates and advocates from elsewhere across the connection had varying reactions to the outcome of the prioritization.

“We’re very happy the Traditional Plan received the majority of the votes,” said Rev. Rob Renfroe, president of the unofficial advocacy group Good News, which has championed the legislation. “In spite of all the efforts of the groups and the bishops, the church remains committed to a scriptural understanding of sexual ethics.”

Bishop Kenneth H. Carter, president of the Council of Bishops and leader of the Florida Conference, said the Sunday vote is “very early in the process” and the work is in the hands of the delegates. (Bishops preside but have neither voice nor vote at General Conference.) 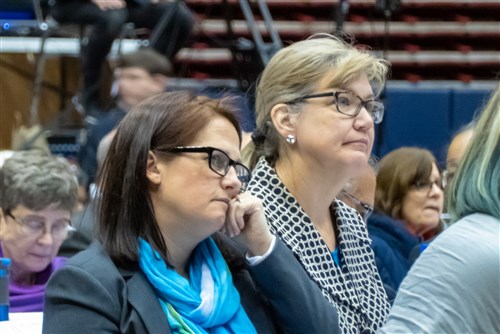 “The Commission on the General Conference was wise in developing a process for this special session: We are a church on four continents, we speak multiple languages and we live in diverse cultures—and we bring all of this to the complex relationships between LGBTQ identity, the unity of the church and our interpretation of scripture,” he said. “The prioritization process helps us to focus.”

Bishop Julius C. Trimble, who leads the Indiana Conference, said his word to his people is: “Hold on and keep doing ministry the way you're doing now,” adding: “There's more to come. Let's not put a period on it yet.”

Neil Alexander said his unofficial advocacy group Uniting Methodists, which supports the One Church Plan, is not giving up.

“We are in the beginning of a complex legislative process,” Alexander said. “There is much debate and many decisions to come. We will be sharing information and ideas we believe will win broad support.”

Rev. Edwin Momog, a delegate from Sierra Leone, said the hall was charged and tense during the vote. But he believes a majority of delegates are happy.

“But God has a way of doing things. He has some sense of humor. When we feel so much anxious, that’s when he comes in with his own way. It is God’s church. And, I think the voting just went God’s own way.”

Audun Westad, lay delegate from the Norway Conference, said it saddened him that the disaffiliation petitions got such huge support.
“That does not look good for their willingness to stay together with people of a different mind,” he said.

The German delegation was surprised that the plan was ranked so low with less than 50 percent of the vote, said Klaus U. Ruof, German communicator. They likewise were surprised the delegates wanted to talk pensions and money before talking about a plan, he said.

“Today’s results are not the first time we as LGBTQIA United Methodists have been hurt by our church, and not the first time that our denomination contradicts its mission, and still we are here,” he said. “We will continue to trust in God's priorities for our welfare.”

The nuts and bolts

In a process that took about an hour, delegates ranked legislation either as high or low priority. Some of the 23 legislative packages involve multiple petitions; others were petitions that can stand alone. Each petition changes part of the Book of Discipline, the denomination’s governing document.

The rankings were displayed after all the plans and petitions had received a vote. More than 820 of 864 delegates from around the world were voting.

The Traditional Plan received 459 votes. The next highest vote getters were two different plans for how exiting congregations could leave with their property, with 412 and 406 votes respectively. The One Church Plan received 403 high-priority votes. The Simple Plan, which would eliminate all restrictive Disciplinary language related to homosexuality, received 153 high-priority votes. The Connectional Conference Plan, which would restructure the church around theological lines, drew 102 votes. 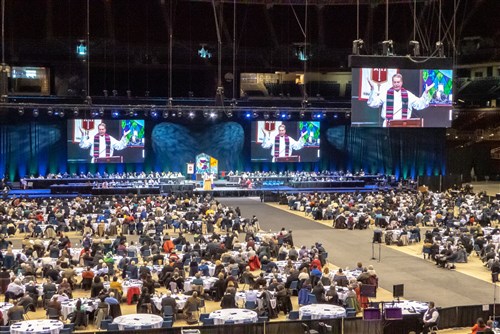 Before voting even began, delegates learned that the two petitions that are part of the Modified Traditional Plan would first go to the Standing Committee on Central Conference Matters. The permanent committee of General Conference deals with legislation that affects central conferences—church regions in Africa, the Philippines, and Europe.

Usually General Conference has multiple such committees, but because the whole gathering is dealing with same parts of the Book of Discipline, there is only one committee with all delegates. The legislative work will continue on Feb. 25.

Bishop Kenneth H. Carter told the delegates to the 2019 General Conference they were in St. Louis because they were respected, trusted, and now hold the mission of the church in their hands.

“Take a moment to look at your hands. If you watch and listen for the good in progressive, centrist, conservative, you will find it. You will see the Cross and Flame,” he said in his sermon at Sunday’s opening worship service.

He asked the delegates to make every effort to make unity “your passionate concern.”

“Remember: you are the people of the Cross and the Flame.”