Powerful worship, initial discussions about legislation, and a key decision about rules of order characterized the first four days of General Conference—a quadrennial meeting at which delegates from around the world convene to make decisions about the future of The United Methodist Church.

On Thursday, the 864 delegates decided not to adopt “Rule 44,” a proposed group discernment process that the Commission on General Conference recommended as an alternative process to Robert’s Rules of Order.

Delegates have spent about half of each day this week in plenary session, worshipping with the full body, as well as receiving reports and engaging in discussion. The other half has been spent in legislative committees. Each delegate is assigned to a committee, and each committee is discussing specific pieces of proposed legislation to determine whether they will go to the full conference body next week.

The four Minnesota delegates who have been on the floor this week share their initial impressions and talk about what they’re doing and what their hopes are for week two:

Rev. Judy Zabel has been to several General Conferences, but the beginning of this one has been unique. While the global nature of our church provides amazing opportunities for partnership and learning, it also creates some challenges—and those have been evidenced this week, she said. While most of the U.S. conferences are declining in membership, the Central Conferences are growing quickly. “How do we manage growth in one part of the body and decline in another?” said Zabel. “That creates a very anxious dynamic.”

“My best hope is that we will renew our commitment to be a church that would be unified in the midst of our diversity, that we would seek peace with one another in order to offer peace to the world,” said Zabel. 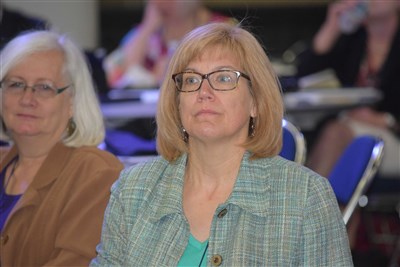 On the first day of General Conference, she was elected chair of the Committee on Presiding Officers, which determines each day which bishops will preside at the plenary sessions. Zabel said the committee is committed to selecting bishops who reflect the diversity, geography, and ethnic and gender diversity of our connection, and who are fair and set a tone that’s conducive to Christian conferencing.

Zabel serves on the Ministry and Higher Education Committee, which is discussing the ordination and credentialing process (including a proposal to remove commissioning and ordain clergy sooner), and proposals to allow clergy to conduct-same sex marriages.

“We are working hard on the Minnesota Conference delegation to listen well, to maintain open hearts and an open spirit, and to continue to work for changes that will be positive in helping us move our mission forward to make disciples of Jesus Christ for the transformation of the world,” she said.

This is Sara Ann Swenson’s third General Conference and her second one as a lay delegate. She notes that there’s been a lot of anxiety during the first week and people seem to be afraid of change, which has made it difficult to find consensus on the rules for the body to follow. 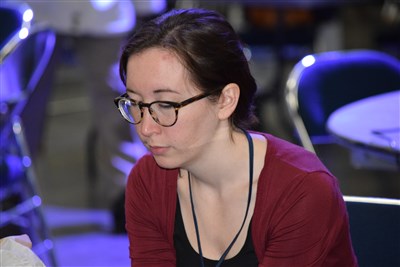 The highlight for Swenson has been getting to know delegates from the Congo, the Philippines, Germany, and elsewhere in the world—and joining in worship across cultures and languages.

“I find such hope and beauty in the ability to develop those kinds of relationships,” she said. “Despite our fears and struggles, this is our greatest asset and I sincerely believe it's where God calls us most to be.”

Swenson is on the Church and Society 2 Committee, which is discussing human sexuality, adoption, family issues, and women's health issues. So far, the conversation is heated and can feel divisive, she said, but everyone in the room cares deeply and believes strongly in their convictions.

“We just need to find a way to trust God and one another to guide us through to some common ground,” she said.

Swenson’s greatest hope is that delegates can let go of their fears of change and of difference to get something done. “I'd love to see us be moved by the Spirit to really listen to wherever God calls us to be,” she said. “I believe we can!”

This is Rev. David Bard’s fifth General Conference, and worship and seeing colleagues and friends from across the connection are always highlights for him. He’s also enjoyed the worship and preaching. 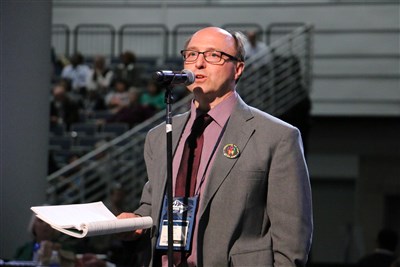 But he said this General Conference has had a much more difficult time deciding on rules to follow than any of the other gatherings he’s attended.

“My greatest hope is that we will be able to find a way forward as a denomination that recognizes the wide and wonderful diversity of our ministry contexts,” said Bard. “I think in some ways the debate thus far is indicative of our wonderful diversity and our need to have fewer decisions made internationally” and more autonomy at a regional or annual conference level.

Bard is on the Faith and Order Committee, which will look at reauthorizing a denominational committee on faith and order and explore issues around the ordination of gay and lesbian clergy.

Bard said he’s pleased and impressed that almost every member of the Minnesota delegation is present, including alternates who may never make it to the General Conference floor.

Faye Christensen describes the atmosphere at General Conference as “tense” thus far, and she was deeply disappointed that Rule 44 didn’t pass.

“It sometimes takes people sitting down, looking eye to eye, speaking from the heart, and really listening to another person’s opinion that may be different from your own,” she said. “Trying something new can be scary, but I think about the words of Jesus: ‘Be not afraid. I am with you.’ Robert’s Rules can pit people against people and it creates winners and losers. That’s not the best way to go for a church.” 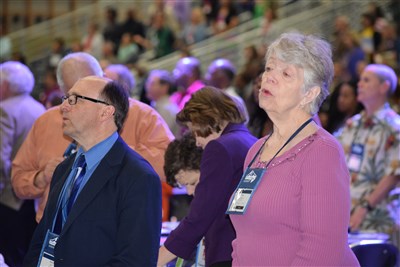 But Christensen has been encouraged by the subcommittee she’s serving on within her legislative committee, Church and Society 1. Climate change, fossil fuels, divestments, and poverty are all issues her committee is exploring.

“I really felt people were listening very intently to each other and working out petitions in a consensus mode,” she said.

Christensen’s greatest hope for the remainder of General Conference: “that we really take issue with what is incompatible with Christian teaching…We could make a long list of things that are incompatible with Christian teaching, but it doesn’t include LGBTQ people who are hurt and who are trying to live with their own identities the way they were born.”