Understanding the polity of the United Methodist church can be tricky. What better way to illustrate our connectional nature than by creating a visual web?

That’s exactly what youth at the 2016 Confirmation Gathering did. Each person assumed the role of a single piece of the greater connection (local churches, conferences, committees, etc.), then the whole group stood in a big circle and tossed a ball of string around the room to connect the pieces. It became evident that if one piece of the connection was missing, the web changed and a weak spot would appear.

That activity was one of many that youth participated last weekend at Cross Winds United Methodist Church in Maple Grove. One hundred and sixty-two youth and 42 adults took part in the two-day event that drew people from about 30 churches. The theme was “Why United Methodist?”

“For students to have the common language behind what it means to be United Methodist gives them an introduction to their Confirmation journey,” said Lindsey Nuehring, who co-leads the conference’s Youth Ministry Team and heads the youth and young adult ministry at Wesley UMC in Winona.

At the gathering, youth also learned about how the committee structure works. They were given a specific idea and then took the idea through the process that would be required to get it implemented. 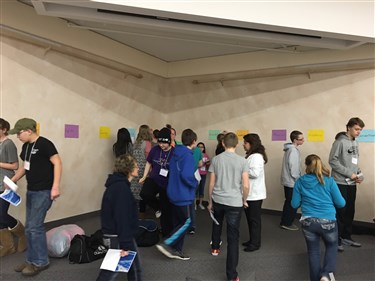 “Students walked away saying, ‘We can do this, we can figure this out,’” said Rev. Erica Koser, co-leader of the conference’s Youth Ministry Team and pastor of discipleship and justice ministries at Centenary UMC in Mankato.

Koser said youth who participated in past conference events enjoyed reconnecting at this event and rekindling their friendships with people at different churches. That was particularly true for one girl she encountered.

“It was fun to see that continuity…to see the excitement and passion that it meant so much to her to have the broader youth together,” Koser said.

Putting on an event of this size is no small task (in case you were wondering, it takes 63 pizzas to feed a crowd of 204), but seeing youth have fun, learn new things, and become on fire for Christ made it worthwhile.

Another meaningful part of the weekend was when members of the Cabinet led the youth in exploring the five United Methodist membership vows: prayers, presence, gifts, service, and witness.

In the evaluations completed at the end of the gathering, one person said the event helped youth learn exactly what it is they are confirming as they go through the Confirmation process.

View photos of the Confirmation Gathering