A team of 11 was in Blue Earth from July 2-6, and a team of five deployed to Morton from July 11-13, said Gary Bochman, who recently became the conference’s disaster response coordinator.

In both locations, the teams worked in homes, removing sheetrock, mopping up water, and scrubbing flood-damaged areas with bleach to remove mold. It’s a process they refer to as “mucking.” They worked on eight different homes in Blue Earth and one severely damaged home in Morton.

Roughly 150 people in the conference have taken early disaster response training and can be deployed to areas where assistance is needed. Conference teams receive assignments through Minnesota Voluntary Organizations Active in Disaster (VOAD), which coordinates with agencies and work teams across the state.

In all cases, conference teams assist individuals who don’t have the means or the ability to repair their homes on their own. In Morton, for example, the team assisted a 93-year-old woman whose main floor of her home had five to six inches of water. 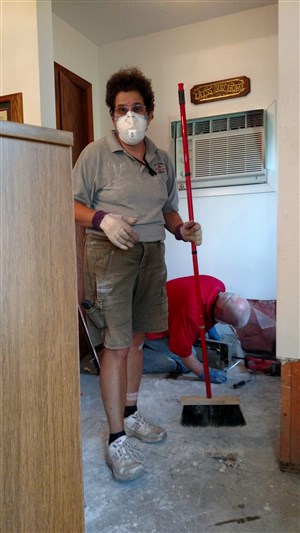 Bochman said that while the repair work itself is important, a key part of what the teams provide is a listening ear and a caring presence during a difficult time in people’s lives.

“We’re called to serve,” he said. “The people we help have a mountain in front of them. We want to get them up part of the mountain. Those of us who serve get a lot back through our experiences.”

For the recent deployments, two local churches provided key assistance by giving the volunteers a place to stay. Hope UMC in Blue Earth housed the first group, and First UMC in Redwood Falls hosted the group that worked in Morton.

Bochman said a lot of teamwork was involved in the recent deployments. While each job initially seemed daunting, the volunteers worked together to make significant progress in a short period.

“I feel that God is helping us work and orchestrate so that we get this done,” he said. “I see God’s presence in every person who works on our team. We’re the hands and feet of God. We work in unity to accomplish something.”

Learn more about disaster response efforts and how to get involved by contributing and/or providing hands-on assistance.