Since July 2016, dozens of members of Community United Methodist Church in Monticello have been stopping what they’re doing at 1:23 p.m. each day to pray.

Several people from the church attended a breakthrough prayer workshop through the Minnesota Conference—and the church is currently participating in the Missional Church Consultation Initiative (MCCI), a revitalization process. Both of those experiences encouraged members to infuse prayer into the life of the congregation.

“The idea is that we’re interrupted in our routine to be reminded to put Christ at the center,” said Rev. Carrie Binnie. Every few months, she supplies a new “breakthrough prayer” to the people in her church. Sometimes it’s more general, and sometimes it’s tied to a specific season of the church year—like Lent or Easter. Some of the prayers have been longer, but Binnie supplied a one-line prayer too: “Holy Spirit, break through our church, unleashing your vision.”

Binnie herself said that for the first few weeks, hearing her alarm sound at 1:23 seemed a little strange—and even somewhat inconvenient, especially if she was in the middle of something, like sending an email. But she quickly got used to it; it became part of her routine. And eventually, she actually started looking forward to that alarm.

The same was true for other members of Community UMC. One businessman from the congregation was in a work meeting one day when his alarm went off. He turned to his business associate and said, “Would you be willing to pray with me for my church?” The two then said the breakthrough prayer together.

After the breakthrough prayer initiative got going, some amazing things started happening. 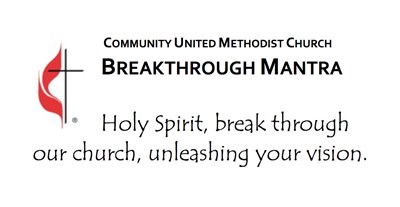 A woman called Binnie one day in tears. Her car had broken down, and she couldn’t afford to buy a new one. She took a cab to work that day, but that was too expensive to be a long-term solution. Binnie mentioned the conversation to a couple of groups in her church, and a member came forward and said he happened to bid on a car in an auction; he’d bought it for his adult child, who hadn’t needed it, and it had been sitting in his garage ever since. He gave the woman the car.

Binnie also learned of someone who needed housing for her family and didn’t have funds for rent. Again, she mentioned it to several groups at her church. One person stepped forward and said she had an extra room in her house and could re-configure it so the whole family could stay there.

“People started really meeting the needs of one another,” said Binnie, who added that there have been multiple financial breakthroughs too.

It’s not just adults who are praying either. At the beginning of this school year, while doing an annual blessing of the backpacks, Binnie gave each of the church’s students a cross keychain for their backpacks and a breakthrough prayer specifically for them.

A fourth-grade boy from the church kept the cross keychain on his backpack, and his classmates started noticing it. “Do you pray?” they asked him. He told them he did, and they started giving him prayer requests.

“When we really and truly turn things over to God and say, ‘Your will be done,’ God has plans for us beyond our wildest imagination,” said Binnie. “It’s so exciting. God is real, God is present, God is there and wants God’s children to flourish in a way that helps to advance the kingdom.”