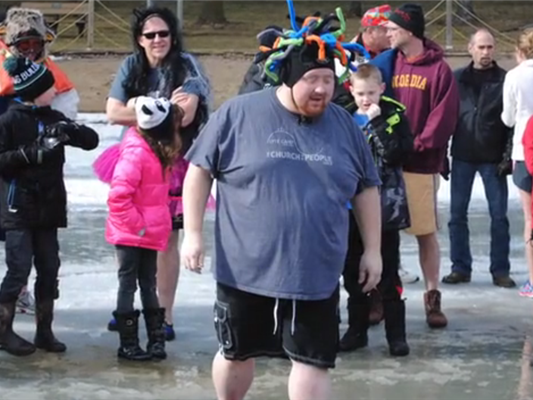 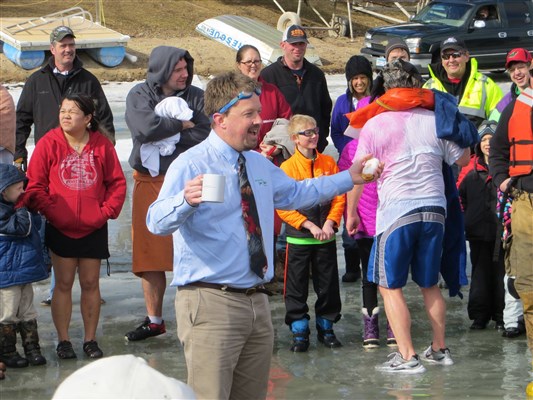 Five Minnesota United Methodist churches collectively raised more than $16,000 to send their kids to Camp Minnesota this summer—and on Saturday, leaders of those churches plunged into frigid Lake Koronis to show their appreciation to members of their congregations who donated funds.

Last year, Cross Winds United Methodist Church in Maple Grove raised more than $3,500 to send its kids to camp. Director of Youth Ministries Rachel Devereaux and Director of Children’s Ministries Tracy Ottenstroer led the fundraising effort by making it fun through the use of videos and their participation in a polar plunge.

This year, they invited churches across the conference to join them. They made available a series of four videos that churches could show members to encourage them to donate funds that would help send their youth to camp. Each church was encouraged to set a fundraising goal—and youth leaders were encouraged to do the polar plunge if the goal was met.

Each participating church received a promotion kit that included a poster, a thermometer goal tracker, and a flash drive containing the four videos, social media graphics, and talking points for brief fundraising presentations to the congregation. Those doing the plunge also received a Camp Chill T-shirt before jumping.

Funds raised will stay within each church and be used to help underwrite the cost of camp registration for that church’s youth.

“We wanted something that gave all the churches in our conference a way to unite for a common goal,” said Devereaux, whose congregation raised almost $4,100 this year. “I’m so happy knowing that we collected $16,000 to send kids to camp…and I’m just really excited about the amazing opportunity that youth are going to have this summer to meet Christ.”

Camp holds a special place in Devereax’s heart because it’s where she encountered Christ for the first time.

“I’m a product of camp scholarships,” she said. When she was in sixth-grade, her youth director told her she should go to camp, but her family didn’t have the funds to send her so the church covered the cost. “That summer, I met God on a mountaintop without any pomp and circumstance,” she added. “The course of my life changed because of that camping experience.”

Cross Winds UMC expects to send about 45 kids to camp this year. Funds raised through Camp Chill will allow the church to cover $110 of the cost of registration for camps lasting at least three nights, and the full cost for two selected shorter camps, including one designed for first-time campers.
All participating churches and leaders had fun with both the fundraising challenge and the plunge.

Minnesota Conference Director of Camp and Retreat Ministries Keith Shew also took the plunge. Inspired by Melcher’s approach, he told conference staff that if they raised $400 for camp scholarships, he would jump; at $800, he would jump holding a donut and an annual conference coffee mug; and at $1,200, he would jump in his Camp Minnesota/Camp Sunday clothing—including a tie! They donated $1,275.

“It’s the coldest I’ve ever been, but I would do it again in a heartbeat,” said Shew. “It is so exciting and humbling to see what we’re capable of doing together as Minnesota United Methodists...In 2017, we hope to have even more churches join us, and watch for some other conference leaders to be challenged to jump.”

Did you know? Camp scholarships are available through the conference to families that don’t have the funds to send their kids to camp. When there’s a need for a family that’s part of a Minnesota United Methodist Church, the hope is that the church can pay a third of the cost, the conference can pay a third, and the family can pay a third. No camper will ever be turned away from camp due to lack of funds.