Churches remember the 21 who died in Uvalde school shooting

How do followers of Christ respond to a school shooting that killed 19 students and two teachers? Many Minnesota United Methodist churches explored that very question in worship on Sunday, five days after the second-deadliest school shooting in U.S. history.

After seeing the idea on Facebook, at least half a dozen churches created a display of empty chairs—19 child-size and two adult-size—to remember and honor those who died at the hands of a gunman at Robb Elementary in Uvalde, Texas.

“I just felt like I needed to do something tangible,” said Rev. Michelle Hargrave, who serves Centenary UMC in Mankato.

Rev. Nick Scutari, who serves First UMC in New Ulm, echoed that sentiment. He wanted to bring something physical to remind people in his community that gun violence is a problem everywhere.

“I mentioned the lack of regulation of guns in my sermon as a social issue, and one that we as followers of Christ are called to work towards as a way to love our neighbors,” he said.

Both Centenary and First UMCs had their chairs displayed outside of their church buildings so that they were visible to members of their communities and not just their congregations.

“I immediately took photos and while I had the camera to my face, a man walked up and sighed and looked, took out his phone, wiped away a tear, and walked on,” said Hargrave, who noted that Centenary left the chairs out for a week and used a video of them for a remembrance at the beginning of online worship. 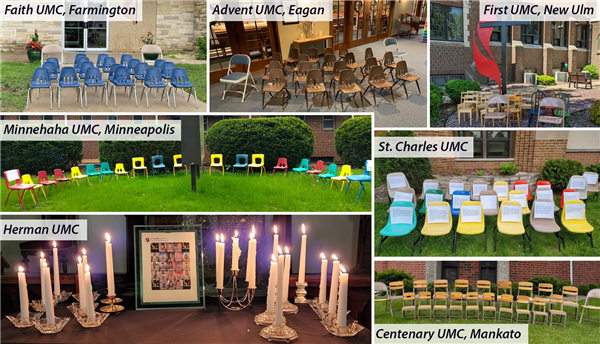 St. Charles UMC, which is located a block from an elementary school, also put a display of chairs outside of its church building; attached to each one was a paper containing a photo and bio of the person that the chair represented. The church included a 22nd chair representing the husband of teacher Irma Garcia; two days after his wife was killed alongside her students, he died of a heart attack.

Rev. Cyndy Spear said gun rights is a hot topic in her rural Minnesota community, and talk about gun control—from the pulpit or elsewhere—often elicits defensiveness. But she was touched by a photo of another chair display and felt it was important to remember those who died.

“It was something we could do and I was hoping it would have an impact,” she said, adding that local residents have been pausing in front of the chairs, which are still out, as they pass by. “My hope is that people look at it and start having conversations among themselves about how we could prevent this…It’s visual without being in your face about gun control.”

The key message she wants to convey: “We have to love our neighbors, and not just those here in our community. God loved each one of these kids and the adults…it could have been our school.”

Other churches remembered the shooting victims in other ways. For example, Freshwaters UMC in Princeton lit candles and read the names of those slain at a Buffalo, New York supermarket as well as those killed in Uvalde. Herman UMC also lit candles and displayed them next to a frame holding photos of the 21 people who died in Uvalde.

Following last week’s shooting, Bishop David Bard issued a pastoral letter urging Minnesota United Methodists to pray—and also to act “to address our problem with violence and the ease with which those intent on doing serious harm acquire weapons that give them the means to do so.”

And in a June 2 blog post, he noted that we need to press the conversation about gun reform. “No law will prevent all gun violence, but might some laws help?” he asked. “Expanded background checks and safe storage laws have significant support among Americans, including many gun owners, a large number of whom already work to keep their guns stored safely. Can we begin our conversation by talking about these policies as public health policies?”

How is your church both remembering those who have died as a result of gun violence and taking action for meaningful change that prevents these tragedies from continuing to happen?