When Debby Newman’s daughter Eve graduated from high school some years ago, there weren’t many ways for her to participate in church. Newman wanted to change that—not only for Eve, but also for other young people with intellectual and developmental disabilities.

So at Newman’s church, Centennial United Methodist in Roseville, she started “Flames,” a program that provides an opportunity each month for that group to come together to enjoy fellowship and grow in their relationship with God. They follow a faith development and confirmation curriculum edited by Newman that includes songs, videos, Bible verses, discussion, prayer, and hands-on activities.

The Flames group started in 2010 with about four participants. Now, there are about nine ranging in age from teenagers to those in their 30s—and two of the Flames were recently confirmed.

“Some of the Flames parents had casually mentioned to me that their loved one hadn’t been given an opportunity to be confirmed with their peers when they were younger,” said Newman, who serves as North Central Jurisdiction representative for The United Methodist Church’s Disability Ministries Committee. “It was important to us that if somebody has in their heart that they love God and they want to make a promise to God and the church, we could help them get on that track to do so.”

Centennial UMC member Phil Schuler’s daughter Connie—who is 37—was one of the two Flames confirmed in September. When Connie was 12, she was in a head-on automobile collision that gave her a traumatic brain injury. It left her partially paralyzed and intellectually disabled, and her IQ dropped from 140 to 68.

Since then, many people have treated Connie differently—a common experience among individuals with disabilities. “That’s hard for her,” said Schuler. “It’s hard for me to see.”

Schuler said the Flames group has been a godsend for Connie, who lives in an adult care home. It’s provided her an opportunity to socialize and make friends, and it’s a safe and welcoming place where she can be herself. Being confirmed in worship before the whole church was a significant occasion for both Connie and for her dad.

“I don’t think those kids should be set aside,” said Schuler. “I think they should run with everybody else.”

Welcoming all of God’s children

Centennial UMC’s Flames group meets on the third Sunday of every month after the regular worship service, which the Flames help lead by serving communion, reading scripture, or in some other capacity.

The Flames gathering is then led by Newman and Rev. Brian Hacklander, the church’s lead pastor.

“I just believe that it is so important for the church to welcome all of God’s children, and my heart aches when I hear of youth or, in our case, young adults who were denied being confirmed because they have intellectual disabilities,” said Hacklander. “To make a place in the church for people with intellectual disabilities is crucial, and more than making a place for them, we do not want to silo them off from the rest of the church but instead want to integrate them into the life of the church.”

A typical Flames meeting goes like this: After having a nutritious lunch together, participants either watch a “Chuck Knows Church” video from Discipleship Ministries or sing a hymn. This is to try to help teach them about what happens during worship and help them feel more comfortable with and included in Sunday morning rituals. Then they’ll do some kind of exploration of a topic or idea, usually involving a video or a song. A topic explored at one recent Flames gathering was how attending church connects us to God. One or two participants will read scripture that relates to the topic, and then Hacklander will ask questions that fit the topic. After a prayer, there’s a hands-on activity. 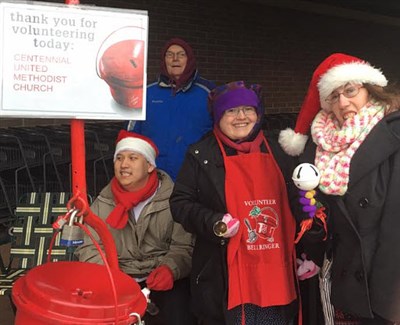 The ministry has grown over the years partly through Flames participants inviting their friends to join. The group has even brought some new families to the church.

“Our Flames, whether they are longer-standing members of the group or brand new Flames who are invited by their friends, they so often have this palpable love of God and desire to follow Jesus that the rest of us can learn from,” said Hacklander.

Newman and Hacklander have been intentional about giving Flames opportunities to interact with other groups in the church through service projects or social activities. Flames members and friends have worked with high school youth and members of the church’s United Methodist Women, and collaborative activities have included preparing flood buckets for the United Methodist Committee on Relief (UMCOR) and working on a Habitat for Humanity house. Every December, the Flames enjoy singing Christmas songs and ringing bells for the Salvation Army.

Newman’s greatest hope is that more churches become intentional about ministering to people with intellectual disabilities—and she notes that there’s a curriculum ready for them to use.

“At Centennial, we’re a welcoming and reconciling church,” said Newman. “That means we’re welcoming to everybody and we meet people where they’re at. To me, it’s important that no one is shoved aside.”