Eight people met at Cascade UMC on Wednesday, Nov. 23, to cook and debone seven large turkeys; prepare dressing, potatoes, and sweet potatoes; and make cranberry sauce. Once completed, everything went into the refrigerator for the next morning.

On Thanksgiving morning, 17 people, including some from outside of the church, gathered to reheat the meal and assemble individual portions. In the weeks prior to Thanksgiving, Cascade UMC received numerous reservations and the crew made sure to package more than enough meals. Each one included hot turkey, dressing, sweet potatoes, mashed potatoes and gravy, cranberry sauce, a bun, and pumpkin dessert. A generous donation of large bags from the local Dairy Queen helped ensure that each order was distributed with the correct number of meals. 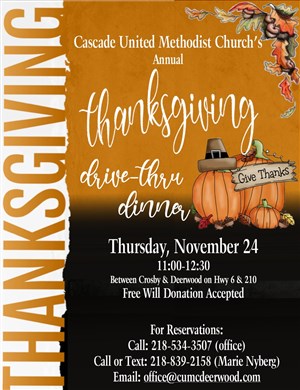 For the first 31 years of this ministry, the meal was a sit-down dinner in the church’s fellowship hall with members of the church and other volunteers serving guests. Ever since the onset of the COVID-19 pandemic, the meal has been served as a drive-through, with volunteers handing meals to guests in their vehicles.

At 11 a.m. on this Thanksgiving, people began arriving and collecting their meals, which were handed out by Rev. Gary Taylor and Marie Nyberg, who has led Thanksgiving meal preparations for the past 18 years. Everyone expressed gratitude and many were happy not to have to cook.

Rev. Gary Taylor has been appointed to Cascade UMC for just five months, but he quickly learned that feeding people is a strength and passion of members, and it has become a core part of the church’s DNA and mission. The people of Cascade UMC seek to embody Matthew 25: 35-40: “For I was hungry and you gave me something to eat, I was thirsty and you gave me something to drink...Truly I tell you, whatever you did for one of the least of these brothers and sisters of mine, you did for me.”

One of the hallmarks of the Thanksgiving meal is that it is completely free for all, with no questions asked. Cascade UMC does accept freewill donations from guests who desire to give, and all of that money is given to the Crosby Food Shelf. This year, $983 was collected and will be given to that organization. 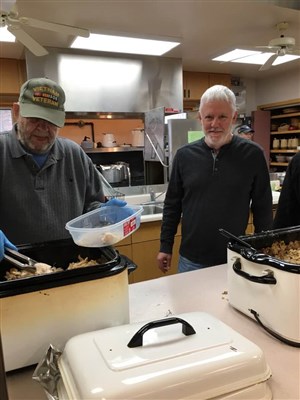 The Thanksgiving ministry dates back to the founding of Cascade UMC, which began Jan. 1, 1987, with the merger of Crosby UMC and Deerwood UMC. Two couples of the newly formed church decided to host two autumn meals, a harvest dinner and a Thanksgiving dinner, with the families alternating each year which one they took on.

“From the start, the meal was given as a thanksgiving for our communities, an opportunity for those who would be alone to fellowship with others, and a way to support the local food shelf,” said Taylor. “It is one of several ways Cascade UMC feeds our community. Thanks be to God.”

In addition to the Thanksgiving meal, Cascade UMC has a monthly “come and eat” that is free to all. During the summer and in partnership with three other churches and another organization, it provides a weekly sack lunch for kids who may depend on the school lunch program during the school year.