At age 14, Isaiah Crossfield has already collected more than 2,000 bikes and thousands of dollars to help others in need around the world.

When Isaiah was 11, he was watching the news with his parents when he became aware of the conditions the people of Haiti were living in after a series of earthquakes and the cholera epidemic that followed in 2010.

Isaiah, an avid bicyclist, figured out a way he could help. He rode his bike 50 miles with his dad, Dwight Crossfield, and collected sponsorships totaling $500 to go to Haiti—but that was just the beginning. He also collected money for a friend who was struck by lightning, rode his bike to raise money for Food for Kidz (a meal packing non-profit), and then decided to start collecting bicycles to send to Haiti, Afghanistan, Liberia, and Somalia.

Isaiah realized that the people of Haiti could use the bikes as a means of transporting doctors to help the injured, assisting residents in getting from place to place, and providing something for kids to play and have fun with. Isaiah holds an annual event to collect the bikes. In the past, he’s also had bike clinics, where he’s taught safety and helped with repairs, and he’s handed out free helmets to the community while at the same time collecting donations of bikes to send overseas.

“He wants to show how his faith can extend to others, and it’s not by doing anything extraordinary,” said Isaiah’s father, Dwight.

Isaiah’s church, Byron United Methodist, has been key to helping him reach his goal. The church has been used as a collection site for bikes, and, church members have donated bikes, money, food, time, and trailers to help transport about half of the bikes to the Midwest Mission Distribution Center in Springfield, Illinois, which distributes them to people around the world who need them most.

“This young man has a heart for mission and his dad works right alongside him to ensure that God’s call upon Isaiah’s heart is answered,” said Rev. Beth Perez, who serves at Byron UMC. 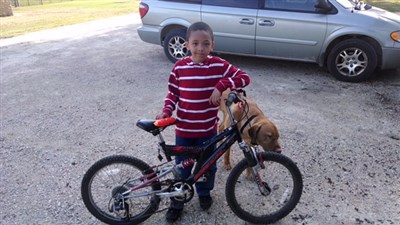 The remaining bikes that Isaiah has collected have been given out to various organizations and churches that contact him and express a need, and to individuals in his area who are in need of a new bike size or a first bike. Bikes have been given to military bases, Native American reservations, and the Boys and Girls Club.

While Isaiah is still collecting bicycles—there are about 200 in the family garage right now—he has set his sights on a new project. Isaiah’s neighbor, Noah, died along the train tracks that connect Kasson to Byron in the winter of 2014.

As a way to honor Noah, Isaiah decided to help fundraise for a bike path that would follow along those tracks and connect to Byron’s existing bike path system. The project could cost upwards of $280,000.

So far Isaiah has received two grants that total about $5,000. The money will go towards fundraising efforts for the path.

Part of the way he promotes his projects is by riding RAGBRAI every year to meet other cyclists and share his story. RAGBRAI is a week-long bike riding event across the state of Iowa that attracts more than 20,000 cyclists annually. 2014 was the first year that he rode the entire route. On the Thursday of that week, he had a fall.

“God did something for me when I was biking and was hurt,” he said. A team of U.S. Air Force bike riders stopped to help him with his injured leg, and he was able to continue.

Isaiah is busy: He’s a Boy Scout, he plays multiple sports, and he is active in his church, but he still finds time to help others.

“I feel like I need to give a little back to this world because we’re having hard times,” he said. “I can help in my way.”

Click here to learn more about the bike path in Byron.