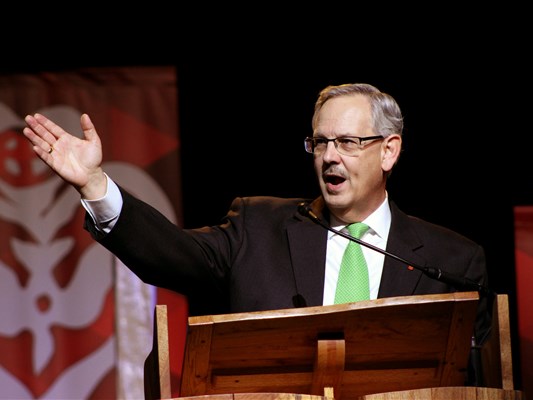 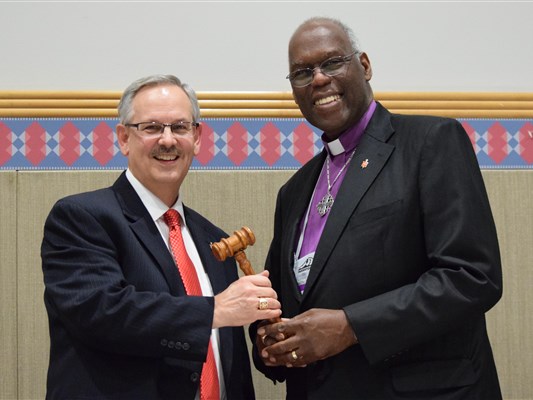 There are more than 12 million United Methodists across the globe—8 million of whom live in the United States, with the remainder in Africa, Europe, and the Philippines. (There are also a number of General Board of Global Ministries missions, and people who are part of them aren’t included in those numbers.) They are overseen by approximately 70 active bishops.

Last week, Dakotas-Minnesota Area Bishop Bruce R. Ough was formally instated as president of the Council of Bishops. Ough recently sat down for a Q&A to answer questions about his new role and what it means for Dakotas and Minnesota United Methodists.

What is the Council of Bishops and what does it do?

“The Council of Bishops is all of the active and retired bishops throughout the entire United Methodist global connection. By Discipline, we’re charged with giving the spiritual and temporal oversight to the entire church. One of the ways I often talk about this is that there is no United Methodist anywhere in the world that doesn’t have a bishop and so the bishops also represent the connection. As they come together, theoretically, every United Methodist has a voice in the council. By giving temporal and spiritual oversight, one of our primary responsibilities is to be the principle vision casters for the denomination—to lift up the mission of the church and to cast a vision for what it looks like when that mission is being fulfilled. We do that in partnership with others within the church. We have a partnership with the Connectional Table.”

What is your role as president of the Council of Bishops?

“First, let me just say that it’s a real honor to be selected and then elected by the Council of Bishops to be the president for the next two years. The president has several roles. The one that probably many people would relate to is that you’re really head of communion, although we also have a part-time ecumenical officer, which is a retired bishop, that carries out many of the functions of being head of communion, represents the president, represents the council, and represents the denomination in many of the ecumenical and inter-religious contexts.

The other responsibility is to preside over the council meetings. Sometimes that’s been seen as a very limited role, simply building the agendas and actually presiding. But I think other bishops who have served as presidents and certainly this would be my orientation as well is it’s also a leadership role—How do you help the council be its best? How do you help the council have a vibrant life together, a strong covenant, a covenant that supports one another and but that’s also accountable for our common and shared leadership? And how do you help the council stay focused on those areas that the general church has said fulfill our mission and our vision, such as the Four Areas of Missional Focus?

Part of what I want to do as president of the council is to be sure that we are maintaining a focus throughout our entire connection on increasing the number of vital congregations and focusing on these areas of missional emphasis, and I also believe we have a role in helping to create the narrative of the church—I know we have communications offices and a communications agency, and they’re really charged with telling the story, but telling the technical story is not the same as creating a narrative about who we are, our identity, how we live into that identity, how we carry that identity into the world.”

What does your role as president mean to the people of the Dakotas-Minnesota Area?

“I want to assure the folks in the Dakotas and Minnesota that this does not mean I will neglect my residential duties. We all understand within the Council of Bishops that our primary responsibility is to the churches and people where we are assigned. But we also do have these connectional responsibilities. One of the things that’s often forgotten because we just don’t talk about it very much, but our Discipline’s very clear that all United Methodist bishops are first and foremost general superintendents, and so we are responsible for superintending the whole church. Within that general superintending, we have these residential responsibilities.

I believe that the work within the Dakotas and Minnesota will not suffer. I certainly do not want it to suffer, and I think it will not suffer because we have such strong leaders. We have great staff people, great pastors. Over these last four years, we have been working extensively to get our staff and our resources and our vision and mission all aligned. So it’s pretty easy to sort of step out to take care of other superintending responsibilities when you are confident that you’ve got an aligned team that’s going to step in and carry things forward.

I also just want to be sure everybody knows, and I think everybody does know this in this day and age: You’re really only as far away as your iPad or your cell phone. And so much like I have been doing a lot of multi-tasking as chair of the Connectional Table this last quadrennium, I expect there’ll be a lot of just trying to pay attention to everything that’s going on in every aspect of my responsibilities. T

he other thing I would say is that there is a great community among the Council of Bishops. Not only do we have good staff that are available to assist me as president, but there’s also a part-time executive secretary…a part-time ecumenical officer. They pick up much of the responsibilities, so I work very closely with an officers’ team, and we really have a shared or collective understanding of leadership and so I don’t have to do everything. I can delegate many responsibilities to other members of the team.”

What do you hope for the next few years?

“For the Council of Bishops, I hope that we can become a stronger community of leaders. Much like the church has divisions and tensions, they are evident in the Council of Bishops as well. I want to try to build a council that has greater unity so that we can model that for the church. I want us to be a council that is in the forefront of leading around increasing the number of vital congregations and giving emphasis to these Four Areas of Missional Focus, on developing leaders, on strengthening our existing churches and creating new places for new people, on offering abundant health and life to the planet, and being in ministry to the poor.

I think the bishops have got to be the voice and the active leaders in their respective episcopal areas to making sure that we are leaning into all of these areas of missional opportunity and doing everything we can do to increase the number of vital congregations because without vital congregations, we don’t have a vital witness, and without a vital witness, we’re not able to attract others into this faith journey.

Finally, I hope I can help the council lead the church in becoming more authentic and worldwide. We’re struggling with this yet. We’ve made good progress but we haven’t yet quite figured out: What does it look like for us to be a worldwide denomination that is democratic? There are worldwide denominations—the Roman Catholic Church would be the best example—that are really not very democratic, they’re hierarchical. Authority rests in one person at the top. We’re a democratic structure, and to build a worldwide connection that’s democratic is very, very difficult, and so I want the council to take leadership in that.

For the Dakotas-Minnesota Area, the answer…is very simple: I want us to keep moving forward in helping every church live into these imperatives of Jesus that we’ve lifted up: to grow in their capacity to love God and neighbor, to reach new people, and to heal a broken world. I just want to keep us on track to develop the leaders that can do that—clergy and lay leaders—to be starting new churches so that we have opportunities to attract other persons into this journey with us, to be helping folks to increase their missional impact in their neighborhoods and around the world, and to call forth the resources, primary the human resources but also the financial and spiritual resources that we need to have a vital movement across the Dakotas and Minnesota. And much of that work has begun…I can’t tell you how proud I am of the Dakotas and Minnesota. Mostly what I’m doing here is just telling people about the Dakotas and Minnesota because I want them to know that God’s at work across the area.”