Bishop: Being the Church in a post-election season

Bishop Bruce R. Ough disseminated the following message to Dakotas-Minnesota United Methodists the morning of Wednesday, Nov. 4, the day after elections took place across the U.S.

A vibrant, sustainable democracy is characterized, among other dynamics, by 1) trust in the electoral processes, 2) free, equal, unobstructed access to voting, 3) respect for the voice and vote of the people, 4) the peaceful transfer of power and, 5) in the end, a loyalty to nation over any party or personality.

I have been privileged to travel the globe and observe or experience a variety of political systems. I was actually in the midst of the coup that overthrew the elected president of Chile while studying there as a college student. I know firsthand that when the aforementioned characteristics of democracy are violated, or not present in the first place, it drives a country into anarchy and/or totalitarianism.

Unfortunately, in this just completed election cycle, many of these characteristics have been under assault in the greatest democracy the world has known. This assault has deepened our divisions and even threatened our public health. At the same time, it has driven citizens to the polls in unprecedented numbers. It is clear we will not easily give up on the democracy we cherish and of which we are beneficiaries.

John Wesley, the founder of our global Methodist Movement, was a strong advocate for both justice and compassion. He gave unprecedented attention to advocating for the end of slavery and for racial justice, and to providing for the poor, the least, and the lost. And, he was a fan of voting as a form of this advocacy.

According to a 1774 journal entry, he urged Methodist Society members “to vote, without fee or reward for the person they judged most worthy, to speak no evil of the person they voted against, and to take care their spirits were not sharpened against those who voted on the other side.” 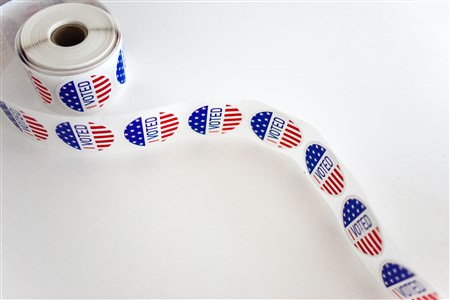 Once again, the people of this country have spoken. Although the final outcome is not yet known to us in many races, including the presidential race, we should not delay in taking care our spirits are not sharpened against those who voted on the other side. Now is the crucial time, perhaps more than ever, to lift up, advocate for and practice the essential characteristics of our democracy:

And, as followers of Jesus, I would quickly add: Hold fast to the kingdom values of justice, love, and mercy. Our Kingdom of God work—our Beloved Community witness—does not stop, nor should it be interrupted, by one election. We are called today and every day to proclaim and incarnate the arrival of God’s earthly reign. Jesus announced the holistic restoration of heaven’s reign on earth. John Wesley taught us that it is impossible to have personal holiness apart from social holiness. We are called to be peacemakers and healers. So, I urge every Dakotas-Minnesota Area United Methodist to go forth in this post-election moment and be the Church.