For many years, a United Methodist Women’s group at Beardsley UMC occasionally visited two nearby nursing homes to serve a light lunch and assist with bingo during social hours. Many of the residents didn’t have strong support networks outside of the facilities, and the need for spiritual and emotional care was significant.

Meanwhile, Rev. Ailsa Harl—who was appointed to the small congregation in 2017—had come to discover that that members of Beardsley UMC had a passion for getting involved in their community and connecting with people on a personal level. So she proposed expanding the UMW’s existing partnership with the nursing homes, inviting the whole congregation to participate, and deepening the relationships that had already been established.

Since August, members of Beardsley UMC have traveled to each of the two area nursing homes—one in Browns Valley and one in Graceville—on a monthly basis. Lay people in the congregation lead residents in singing hymns and give a message that speaks to something residents can identify with; reflections have included topics such as farming, family, grandchildren, and the elderly—all of which have then tied into a Biblical theme or passage from scripture. Leaders conclude by inviting everyone present to hold hands and recite the Lord’s Prayer, and then enjoy fellowship and refreshments.

“They’re passionate about the older generation,” said Harl. “That’s the lost and forgotten bunch out here. What I’ve noticed is that because of this outreach and this care, it’s brought into focus intergenerational connections and how important that is.”

Nearly every single member of Beardsley UMC—which averages about 20 to 25 in worship—has participated in the ministry to the nursing homes, and between 20 and 30 residents at each one typically join in the monthly gatherings. Nursing home residents have had an overwhelmingly positive response to the ministry, and they always ask when the congregation is coming back for the next gathering. 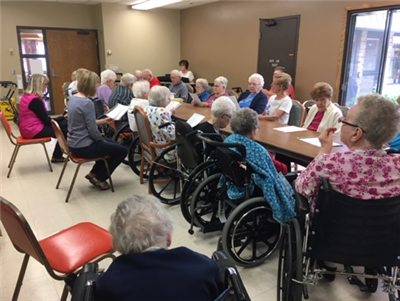 The outreach has been significant for the nursing home residents, but it’s also made a huge impact on the congregation: Members have shared that it’s changed the way they look at their own faith, it brings back memories of their own parents, and it’s given them a meaningful opportunity to come alongside people in this final season of their lives. Harl has noticed that since the nursing home outreach began, more people participate in worship, new leaders have emerged, and older parishioners have embraced the opportunity to shepherd the younger ones.

“I see a lot of the Holy Spirit working and moving through people,” said Harl. “It seems like the congregation has bonded over this. They’ve created safe spaces for one another. They’ve allowed the Holy Spirit to work in and through them. God is stirring up a lot of creative energy and outreach.”

One member of the congregation who had lost her mother had a difficult time on her first nursing home visit. A woman there had the same disease that had plagued her mother, and the memories it brought back led to tears and prompted her to leave early. Harl wasn’t sure she’d return, but she did. “It brought healing because she could come alongside another person dealing with the same thing her mom had,” said Harl.

The residents at the nursing homes run the gamut in terms of their mental acuity and physical ability. Some have dementia or Alzheimer’s, and others physically can’t hold a piece of paper. “It’s been interesting to watch parishioners come alongside of them,” said Harl. “They are patient and loving. They meet them where they are.”

Harl said one woman at one of the nursing homes has Alzheimer’s and frequently displays some aggression. Remarkably, during one of the visits from Beardsley UMC, she walked up and sat between two parishioners and had a nice conversation with them. The staff commented that they hadn’t seen the woman so happy and at peace in more than a year. Something about that sacred space that the visit created spoke to her.

For Harl, the most rewarding thing is seeing lay people step up to lead and walk alongside residents at the nursing home gatherings—and deepen their own faith in doing so.