Klu Taw, 71, her husband Thur Dy, 58, and their grandchildren, Thay Su, 21, and Eh Su, 19, stepped off a plane just before midnight on March 10 to a crowd of extended family and members of Arlington Hills United Methodist Church.

The four promptly received coats to wear—and scarves that church members made by hand.

Arlington Hills is sponsoring the Karen family members as they adjust to a new life in Minnesota. (The Karen are an ethnic group from the mountainous border regions of Burma and Thailand.) The Maplewood church has a history of sponsoring refugees—this is the church’s third family in the past seven years. Its latest sponsorship comes at a time when Europe is confronted with the largest mass migration of people since World War II, resulting in hundreds of thousands of displaced people and an influx of refugees to the United States. Rev. Dr. Tom Biatek encouraged the congregation to look for ways to welcome refugees to Minnesota and the east metro, particularly given the hate and intolerance that’s greeted them elsewhere.

“We wanted to let our community know that we are not afraid of refugees and will do all we can to welcome newcomers into our community,” he said. “We felt that we were fighting intolerance with an act of love.”

The four people Arlington Hills is sponsoring actually came from Asia. The family left Myanmar (formerly Burma) more than 20 years ago, after ethnic persecution forced them to go to the Mae Ra Ma Luang refugee camp in northwest Thailand—where they’ve lived ever since. The camp, which straddles a river with steep hills on each side, houses more than 10,000 refugees.

After the family registered with the United Nations refugee agency, they were selected to come to the United States because of family connections here. They went through a rigorous background check in order to even be considered.

In St. Paul, the family lives in a quiet apartment, and unlike at the refugee camp, each person has their own new bed.

“We have been a really great, supportive church that prays for each other… but it’s about going beyond that, getting into the world and our world is at our 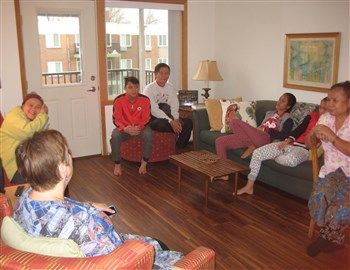 Sponsoring a family involves making a commitment to the refugees for a four-month period that starts even before the family arrives. The church is working with the Minnesota Council of Churches (MCC) Refugee Services, which offers support through case management, immigration, employment, and education. (It is also one of the recipients of the 2016 Love Offering.)

“Not all the families are Christian, but it’s not about evangelism,” said Solheim. “It’s about being the hands and feet of Jesus in the world we are serving, and it’s a real privilege to be able to do that for a family starting at ground zero.”

The individuals that Arlington Hills is currently sponsoring are among more than 9,000 Karen refugees who call Minnesota home. Many live in St. Paul and Maplewood, and Arlington Hills serves refugees in a variety of ways.

The church has a large garden containing about 25 plots for area residents. Farming and gardening is very common in Myanmar; the plots allow for the refugees to not only grow their own food, but to keep their cultural traditions alive.

The church also hosts the McVay Youth Partnership through Hamline University. The after-school program is for youth in grades 5-12, including some refugee students, who meet three times a week for tutoring, art projects, and other fun activities.

A Boy Scout troop that meets at the church considered starting a Karen chapter, but the troop realized that inviting Karen boys to join them would create a great learning opportunity for both groups—so that’s just what they did.

Long before the latest family arrived, the church prepared for its arrival by hosting a Karen cultural session with the McVay students and by having an orientation with the MCC to discuss general questions about hosting a refugee family. The church’s Thanksgiving and Christmas offerings went toward furnishing the apartment the family moved into—and church members gave the space a few special touches to make the family feel at home, including framed family photos used as decorations.

The MCC helps to connect the family to most of their benefits, including food stamps, and health screening. Meanwhile, Arlington Hills UMC’s mission team recently took the family to the Social Security office. A third partner, the Karen Organization of Minnesota, is helping them find employment. While their benefits cover the first three months of rent for their apartment, it is expected that the family will quickly become self-sufficient.

For now, the whole family will learn how to speak English and take other classes that will help its members transition to employment. The mission team from the church has been helping the family with transportation by driving them to and from meetings and teaching them how to use the bus system. 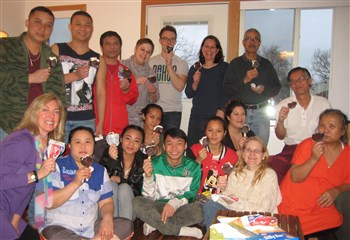 The mission team has also taken the family out for ice cream several times, given them a tour of the Twin Cities, and brought them to the Como Conservatory to remind them of the weather where they came from.

“Can you imagine—it’s one thing to go to a different country for travel, it’s another to re-learn everything you’ve known,” said Martha Rice, community outreach director at Arlington Hills UMC.

By being there for the family, church members hope to share God’s love in a tangible way—and as they provide blessings to these four people who used to be strangers, they are making new friends and in turn being blessed themselves.

For more information about MCC Refugee Services, and to learn how you can sponsor a family, click here.

For more information about the Karen Organization of Minnesota, click here.