Rev. Jeanine Alexander, who has served Minnetonka UMC for the past five years; Denise Hoek, Christian education director at Balaton UMC; and Aitkin UMC, which made a permanent heart and mind shift after a death in its community, were recognized for the ways they have impacted their communities and reached new people for Christ. Here’s a brief look at their contributions:

During Rev. Jeanine Alexander’s five years at Minnetonka United Methodist Church, she has welcomed more than 200 new members, not counting children and youth, which would almost double that number. More than 40 have been baptized. Worship attendance has increased from 220 to almost 350. Financial giving has significantly increased, with 40 percent of pledges for 2017 being new or representing increases. In 2014, Alexander began a church-wide Lenten study to kick off small group ministry. Now, Minnetonka UMC has thriving small groups, with new ones starting regularly. At least 320 people have taken the class Making Sense of the Bible based on the book by Adam Hamilton. Alexander is constantly asking the questions: Where have you seen God at work? Who are you inviting into ministry? Who are you inviting to church? How will this event reach new people? What can we invite new people to next? “While many people have steered away from using the word ‘evangelism’ or ‘evangelical,’ Pastor Jeanine claims it,” said Rev. Tiffany McDonald, Minnetonka UMC’s associate pastor. “She truly believes that we have the good news the world needs to hear, and she wants everyone to know about the love of Christ.  ‘Evangelism’ could have no better modern face than Pastor Jeanine Alexander.”


Seven years ago, when the number of children at Balaton UMC was declining, Christian Education Director Denise Hoek had a light-bulb moment and set out to try something different. Working with her counterpart at a Lutheran church in Balaton, Hoek started “Jesus and Me” or “JAM”—Wednesday evening programming for members of both churches and the community. Today, more than 150 kids show up for JAM each week—particularly significant for a town of 630 people. And at least two other Minnesota United Methodist churches—Sleepy Eye and LeSueur—have replicated JAM in their settings. Hoek’s pastor, Rev. Lori VonHoltum, said Hoek “keeps me and our church moving forward, not standing still. She keeps us thinking outside the box, not afraid to try new things. She is always looking forward to ‘What next?’ and how we can reach more people, and looking for ideas that are relevant for today’s world that communicate to children and youth, and how to share Jesus through it.” (Watch video on JAM.) 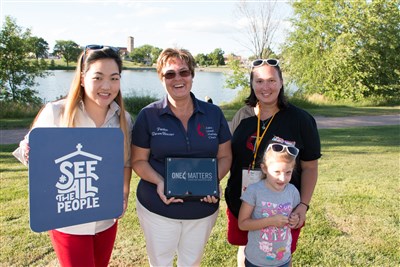 On October 18, 2015, the small town of Aitkin changed forever. This is the day when Steve Sandberg, a 24-year deputy with the Aitkin Sheriff’s Office, was suddenly killed while on duty. His death stunned the community and the congregation of Aitkin UMC, to which his family belonged. As the pastor of Aitkin UMC, Rev. Dawn Houser was catapulted into the spotlight, as she was charged with arranging the funeral for the fallen deputy. More than 3,000 people attended the funeral, including Gov. Mark Dayton and Senator Amy Klobuchar. This was a key moment in the four-year vocational ministry tenure of Houser and also began a transformation for her congregation. The funeral allowed Aitkin UMC to be church to its community, and it was then that Houser encouraged members to become more engaged with their town. Aitkin UMC has made a permanent heart-and-mind shift from focusing on worship attendance to serving the community in whatever capacity was needed. This included opening up the church building for community use, buying a bounce house for neighborhood kids, planning a Halloween trunk-or-treat that welcomed more than 300, and changing the Vacation Bible School (VBS) format to accommodate working parents. Not only has Aitkin UMC’s professions of faith increased from zero in 2015 to eight in 2016, but members’ hearts were broken for their community—and they followed Jesus’ teachings by being the salt and light that Aitkin needed.