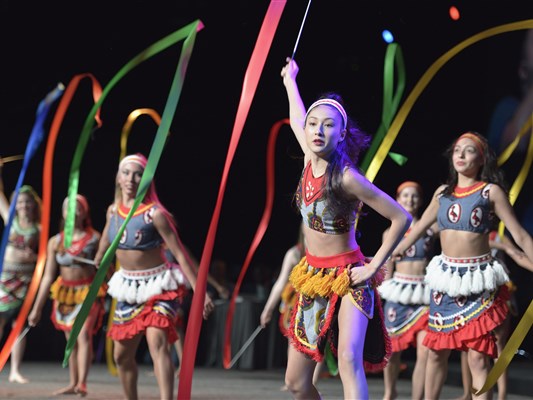 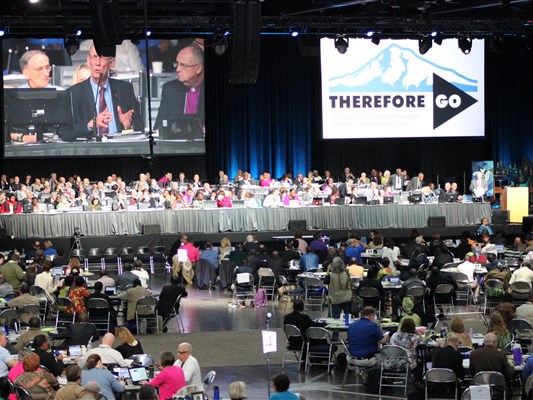 By: Joey Butler (for UMNS) and Christa Meland

General Conference, the United Methodist Church’s top legislative body, met at the Oregon Convention Center from May 10-20, 2016. General Conference is the top policy-making body of The United Methodist Church, and it convenes just once every four years. The voting membership consists of an equal number of clergy and lay delegates elected by annual conferences from around the globe. This body can revise church law, as well as adopt resolutions on current moral, social, public policy and economic issues. It also approves plans and budgets for churchwide programs.

Wondering how to condense 10 full days of worship, celebration, discussion, and business into a report you can provide to members of your congregation? Here are some highlights to consider sharing:

Delegates voted 428-405 to accept a Council of Bishops recommendation to delay a debate on human sexuality until a new commission can examine the issue. All petitions related to human sexuality were deferred as a result of the vote.


The bishops will name a special commission that would completely examine and possibly recommend revisions to every paragraph in the Book of Discipline, the denomination’s governing document, that are related to human sexuality. The commission will represent the different regions of the global church as well as the varied perspectives of its people.

Should the commission complete its work before 2020, the year of the next scheduled General Conference, the bishops would call a special two- to three-day gathering in 2018 or 2019 where human sexuality could be further discussed.

Bishop Bruce R. Ough presented the Council of Bishops recommendation after General Conference delegates made a nonbinding request that bishops offer a path forward out of the “painful condition” of the church in this long-simmering debate over sexuality.

3. Bishop Ough becomes president of the Council of Bishops

In a ceremony before episcopal leaders from around the globe, Dakotas-Minnesota Area Bishop Bruce R. Ough was formally instated as president of the Council of Bishops. The council is made up of all active and retired bishops of The United Methodist Church. Its president is responsible for presiding over the bishops’ executive committee and twice-yearly council meetings, and is occasionally asked to speak to journalists and others on behalf of the council.

The United Methodist Church is on track to get its first new hymnal since 1989, and this one will be Internet-cloud based and print-on-demand—the first high-tech hymnal for a mainline denomination. General Conference approved a petition authorizing the creation of a 15-member Hymnal Revision Committee. The 2020 General Conference will need to approve the committee’s recommendations, with release of the new hymnal coming as early as 2021. Each congregation will be able to customize its selections, beyond a core group of hymns.

Africa will get five more United Methodist bishops, but not before 2020. Delegates narrowly defeated an effort to add two bishops immediately, in Nigeria and in Zimbabwe. Instead, they favored adding five bishops after General Conference 2020. Meanwhile, during budget deliberations, delegates voted to add $5 million to double to $10 million the denomination’s Central Conference Theological Education Fund, which supports United Methodist schools, pastors and pastors-in-training in Africa, Asia and Europe.

Delegates also approved a petition to create new provisional central conferences in Rwanda and Southeast Asia/Mongolia. This new designation affirms the maturity of these regions and makes them a regular part of the United Methodist connection. The Minnesota Conference has direct ties to Southeast Asia: Dakotas-Minnesota Area Bishop Bruce R. Ough was also bishop of Vietnam, Laos, and Thailand from 2010 to 2015, and the Minnesota Conference currently has a partnership with United Methodist missionaries in Vietnam in order to help foster an abundant life for Vietnamese children.

Delegates overwhelmingly approved a resolution calling on United Methodist agencies to raise awareness about the harm caused by sports teams that use mascots or symbols that disrespect Native Americans. The Discipleship Committee amended the petition, deleting language that would have called on United Methodist groups not to have meetings in cities that have sports teams with such mascots or symbols, which previous church resolutions contained.

Concerns about legislation were set aside as delegates focused instead on a historic tragedy with deep Methodist involvement. The 1864 Sand Creek Massacre was the subject, and speakers included a historian and descendants of the Cheyenne and Arapaho Indian survivors of the attack. Mountain Sky Area Bishop Elaine J.W. Stanovsky had joined the descendants in planning the event, the latest effort yet by The United Methodist Church to atone for the Sand Creek Massacre. “We now extend our hand in friendship to the Methodist Church,” said William Walks Along, a Northern Cheyenne descendent of massacre survivors. “We have developed a measure of trust, respect and honor for each other.”

8. Withdrawal of funds from Religious Coalition for Reproductive Choice

An amendment offered during a debate on socially responsible investing that sought to divest from illegal settlements on occupied lands failed 559-167. But delegates adopted a petition on behalf of a Palestinian village, Wadi Foquin, where United Methodists support an Advance project and community development site. Delegates chose not to add a fossil fuels investment screen for the United Methodist Board of Pension and Health Benefits.  The question came down to divestment vs. engagement as the better way to use church investments in influencing energy companies to address climate change.

Twenty-six women were consecrated as deaconesses—laywomen who are called by God to share faith in Christ through ministries of love, justice, and service. Minnesotan Kim Harris, a member of United Methodist Church of Anoka, was among them. Deaconesses are consecrated just once every two years—and preparing to be commissioned is a multi-year process that involves an extensive application and the completion of five specific theology classes.

The United Methodist Church sent new missionaries from 11 countries to serve in 16 lands. The liturgy of commissioning was believed to be the first at a United Methodist General Conference. Rev. Daniel Yang, a Minnesota elder who spent seven years at Hamline UMC and 15 years at Wheelock UMC in St. Paul, was among them. Yang is from Laos and will return there in July to start new churches and to train and equip leaders to share the gospel. There are currently about 66 house churches in Laos; he hopes to grow that number to 120 by 2020.

One Great Hour of Sharing will now be known as UMCOR Sunday. Offerings for the special Sunday, observed annually on the fourth Sunday of Lent, cover the United Methodist Committee on Relief’s overhead. Two other special Sundays, Women’s Ministry Sunday and Volunteer in Mission Awareness Sunday—both without offering—were approved as well.

13. Stirring worship
As the only time the entire global church is together every quadrennium, General Conference always features festive and moving worship services. The opening worship service began with a drum welcome from indigenous peoples of the Pacific Northwest and a cacophony of “alleluias” in many languages. Every worship service featured sermons by United Methodist bishops, and a running theme for the event was to stay humble, serve others, and be the church that Christ wants us to be. Chicago Area Bishop Sally Dyck urged United Methodists to do as Pope Francis said, Go; learn mercy. Sierra Leone Area Bishop John K. Yambasu issued a challenge “to dismantle the demons of all sorts of inequalities in our world.” Bishop Ivan M. Abrahams, top executive of the World Methodist Council, reminded delegates that Methodism was founded on a commitment to those on the margins. “Conference,” he asked, “is this still true for us today?” On the last day, Bishop Elaine Stanovsky reminded those attending that “we will not leave divided because God is not finished with us yet!”

Bishop Ough led communion in opening worship, and was assisted by two deacons from the Minnesota Conference: Revs. Paula Colton and Victoria Rebeck. Ough also gave the sermon in closing worship, charging attendees to “Go where the wounds are and proclaim there is healing for every wound—every wound, every sin, every brokenness!”

Attendees also celebrated Imagine No Malaria, launched in 2008. The Minnesota Conference raised $2.8 million for this initiative, more than all but one other conference across the connection. That $2.8 million equates to 280,000 lives saved. The General Conference celebration debuted “Able,” a song commissioned by Imagine No Malaria as a gift to United Methodists across the globe. Jeremy Rosado, a Top 12 contestant on “American Idol,” performed the song for more than 1,000 people attending the event.