Sydney Colton has had some pretty spectacular birthday parties over the years. One year, she took her friends to Sky Zone Trampoline Park. Another year, they had a pool party. Each year, her friends gifted her the latest and greatest toys.

But when her family moved from Plymouth to Rockford last year, it became evident to Sydney and her mom that Sydney and her brother Elliot had outgrown a lot of their toys—and they had a lot more than they really needed.

So in starting to plan for Sydney’s 11th birthday, Sydney’s mom, Rev. Paula Colton, asked her: “What would you think if we invited people to our house, and instead of doing presents, we asked them to donate money to something that you love?”

Sydney embraced the idea. In choosing the cause she wanted to support, she thought about how much she loved summer camp. The fifth-grader typically visits Koronis Ministries twice each summer, once for drama camp and once for horse camp, and the experiences are consistently the highlights of her summer. So in honor of all of the formative and fun times she had at camp, she chose to ask her friends to make a donation to Camp Minnesota camperships (camp scholarships) instead of giving her presents.

“I’m getting older and I’m starting to grow out of childish stuff—and I really enjoy camp,” she said, adding that she liked the idea of helping other kids get to enjoy the experience that she cherishes each year. 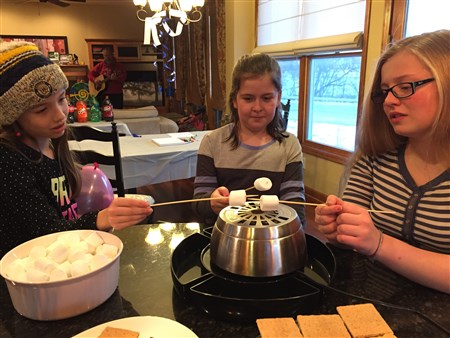 So Sydney invited 15 of her friends—all girls—to her house for a camp-themed birthday on Jan. 7. They were instructed not to bring gifts and instead invited to make a small donation to Camp Minnesota.

All of Sydney’s favorite things from camp were incorporated into her party. Koronis Ministries Director Dan Ziegler not only came but played his guitar while leading the youth in singing traditional camp songs. The girls ate Sydney’s favorite meal from camp—spaghetti, salad, and French bread. And they even toasted marshmallows and ate s’mores. Each attendee was also invited to share her own camp experiences if she had a favorite camp she’d attended. Each girl left with a 2017 Camp Minnesota brochure to peruse (click here to register for summer camp).

Rather than bringing gifts, many of the partygoers brought Sydney a card—and a check for camperships. In total, they gave $105 and Sydney’s parents matched that amount to bring the donation to $210 (all of which will go toward getting Bishop Ough to take a polar plunge in Lake Koronis on Feb. 18).

In thinking about the kids who would be able to go to camp because of these donations, Sydney said: “I really wish that they see how fun it is to be there and enjoy the fun times at camp.”

But for Sydney, going to camp isn’t just about having fun. It’s also about growing in her faith. 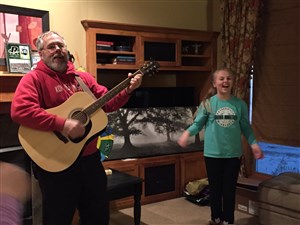 “The counselors make it easier to connect to God through the lessons they teach,” she said.

That’s particularly significant to Sydney’s mom, a deacon in the Minnesota Conference. Paula Colton spent four years as the director of Decision Hills Camp, a Minnesota camp that’s been on the market since 2015. It’s actually where Sydney was born.

“Camp provides an opportunity to recharge your spiritual batteries,” said Paula. “My kids go to church on Sunday but I like knowing they have conversations about God and are hearing people sharing their faith stories beyond church.”

Sydney admits it was “a little bit” hard to willingly give up presents in favor of supporting camp scholarships, but she also says she’d do it again in a heartbeat.

“We’ve been given so much in our life,” said Paula. “Last year, having packed everything we own and moved into a new house, it made me think we don’t really need a lot of presents. How can we stop thinking about ourselves and give thanks? Sydney just celebrated another year of her life on earth. How do we celebrate that life is a gift from God? This was a way to do that.”