It was a hot summer Sunday morning on June 26th in downtown Minneapolis as a colorful crowd of more than 175,000 gathered for a parade. When the parade began, the spectators were quietly reflective as they watched the individuals who carried photos of the 49 people recently murdered in Orlando in a mass shooting at the Pulse nightclub. But with a resilient spirit, members of the crowd soon came together to celebrate the freedom to be themselves.

A simple message of “God Loves You!” adorned both sides of a float representing more than 20 Reconciling United Methodist congregations in Minnesota. In most parades, this core statement of Christian belief would be non-controversial, but for many in the LGBTQ community, it becomes personal if they have felt rejected in the past.

As this Reconciling parade unit that included more than 75 Minnesota United Methodist laity and clergy traveled down Hennepin Avenue led in song, these individuals connected with many in the crowd as they promoted and offered a safe place for all to worship. Some held framed signs with the names of the Reconciling churches. It was a diverse group of young and old walkers. Minnesota Reconciling congregations have participated in the Pride parade and festival for more than two decades. 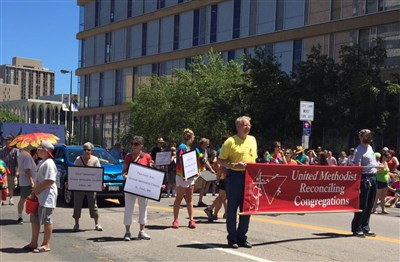 Over in Loring Park at the Pride festival site, volunteers from Reconciling United Methodist congregations participated in a more personal outreach on Saturday and Sunday. At the Reconciling festival booth, some event attendees approached volunteers to inquire about finding a safe place to worship at a church that would accept them. Other attendees had questions about the positions of the United Methodist Church with respect to LGBTQ people.

The Reconciling volunteers distributed more than 4,000 rainbow peace medallions to people who visited the booth; these medallions were typically placed over the head of the recipient by a volunteer who wished them well. These actions represent a small way to show passers-by that God loves them.

We are reminded of the recent statement issued by Bishop Ough in response to the shooting in Orlando. In it, he said: “I hope United Methodists will see this as an opportunity to speak up and speak on behalf of what is at the core of our DNA—love God and love neighbor.”

Kelly Dunn is a member of Minnetonka United Methodist Church and active in the Reconciling Ministries Network.

It Worked For Us (success stories)
print this article