The Joyful Journey: One More, Once

April can be a strange month. My only cancelled preaching engagement related to weather in Michigan came on an April Sunday. The roads were icy that morning. Temperatures in April can dip well below freezing and soar into the 70s. Just when you think spring has arrived for good, chill winds blow and snow falls. In April, you want to keep your boots handy, but also want to know where your short-sleeved shirts are hanging.

The origin of the name for this month is also a bit mysterious. Is it rooted in the Latin word “aperire,” meaning “to open,” or in the Greek goddess of love, Aphrodite? In either case, the warmth that comes at least sometime during the month, following a long winter, lends itself to openness, hope, and maybe love. A popular band from my teenage years sang of April love. “April gave us springtime / And the promise of the flowers / And the feeling that we both shared / And the love that we called ours” (“Pieces of April,” Three Dog Night).

Openness, hope, and love can feel difficult right now as we come into April 2022. Scenes of war in Ukraine are heartrending—buildings bombed out, citizens shot and killed by the retreating Russian army. What possesses people to behave with such cruelty, such disregard for life? The first weekend in April opened with a number of incidents of gun violence, including the worst mass shooting in the history of Sacramento, California, leaving six dead and 12 injured. We seemed to have turned a significant corner in the COVID-19 pandemic, yet we have not quite yet broken free and clear. Another virus variant has emerged and we are not yet sure of its potential impact. Our political system appears more fragile than in most of our lifetimes. Within our denomination, an inevitable division nears, even as we are unable to meet in a General Conference to consider a universal plan for that separation. Being the church in such a time as this is difficult, and the difficulty, prolonged as it has been, is wearing. Leading the church in such a time as this is wearying. 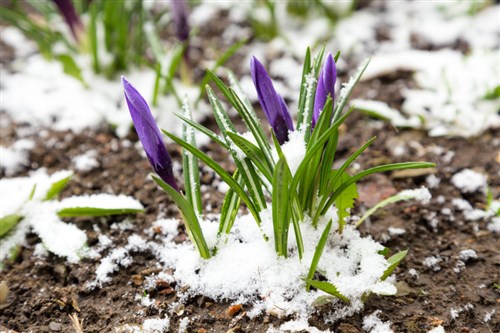 Openness. Love. Hope. April. Yet all I have just written sounds like a lot of chill winds, cold rain, ice, snow.

And April is the month of Easter, at least most of the time. While Easter can come in late March, April is its typical home, as it is this year.

April. Easter. Resurrection. “Why do you look for the living among the dead?” “He is not here; for he has been raised.” “Do not be afraid.” In a world filled with Good Friday news, we trust in Easter. We believe in a God who raised Jesus from death, and we trust this God to continue that life-giving, life-affirming work in our lives and in the world. Because of resurrection, we are open to each new day, open to each other, open to the future. Even when in our openness to the world we encounter its pain and brutality, we remain open to hope because we trust this life-affirming God whose power is love and whose dream is for Beloved Community. We trust that in the end love triumphs and resurrection awaits.

On my most difficult days, I can keep going with openness, love, and hope because of the resurrection. I think of another April song, the hearing of which almost always lifts my spirits and the ending of which is a kind of resurrection story.

Count Basie and his band recorded “April in Paris” in 1956. At the end of this jubilant jazz tune, you hear Basie tell the band, “One more time,” and they launch into the chorus again. And then in something like the exuberance and extravagance of resurrection, Basie calls out, “let’s try it one more, once.” The band swings the chorus joyfully one more time.

I’m with you on this joyful April Easter journey.