The heart of the Magi: Bishop's Christmas message

Allow me a bit of historical context. According to the ancient historian Herodotus, the three wise men of the Christmas or Epiphany story were originally part of a warring tribe that attempted to overthrow the Persian empire that had conquered them. When their attempt failed, they gave up the desire for power and became a tribe of priests and scholars. The Magi became the purveyors of philosophy, medicine, natural science, and astronomy. They became seekers of truth and knowledge. They became students of the stars. They became seekers of the light.

I have only known a very few contemporary Magi—true wise men or women. It will not surprise most of you viewing or reading this message to know that the late Bishop Rueben Job, a dear, long-time friend, colleague and mentor, was for me a contemporary wise man. Too often, we embrace and follow powerful, wealthy, arrogant, and even deceptive individuals as our contemporary wise men or women. But, in my experience, the wisest people I know are humble, faith-filled believers like Rueben. They are seekers of the light. They have the heart of the Magi.

The first word spoken by a human character in the gospel of Matthew is “Where?” This is also the Magi’s question: “Where?” Where is the child who has been born king of the Jews? Is this not our heart question as well? 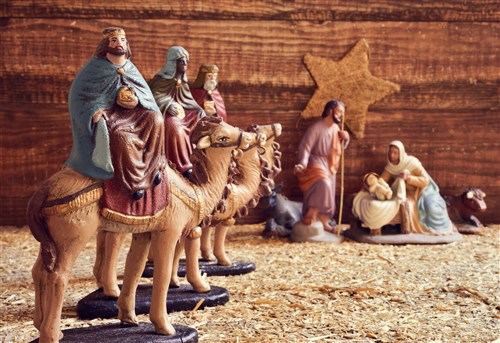 When the Magi came to Bethlehem and saw the Christ-child in the arms of Mary, they were overcome with joy, knelt down, and worshipped him. The Magi humbly knelt down before the great, incarnate God of the universe.

Then the Magi opened their treasure chests and presented Jesus with gifts of gold, frankincense, and myrrh. The Magi recognized and blessed the source of all their blessings.

After honoring the baby Jesus and being warned by God in a dream, the Magi went home another way. After kneeling at the manger—after kneeling before the Christ-child—the Magi determined to change direction, to journey another path, to live a different way. It is, of course, presumptuous and preposterous to suppose the Magi chose to live the United Methodist way: to do no harm, to do good, and to stay in love with God and neighbor. But it is clear the Magi were led to travel and live a different “way.”

We are truly in a season across the entire global United Methodist Church of actively seeking Emmanuel—God with us. We are seeking Christ’s leading. We are waiting to see how God will work with us and through us to accomplish God’s mission.

My prayer is that we will approach this Christmas season, and our life together in the Dakotas-Minnesota Area, with the hearts of the Magi:
• Hearts constantly asking “Where is the Christ?”; hearts constantly seeking Jesus.
• Hearts with only one posture: the posture of kneeling in humility and awe and obedience to Christ.
• Hearts filled with thanksgiving; hearts that lead to generosity in all things.
• Hearts being shaped and formed to live and travel a different way—the way of love and grace and peace and unity.

And so I pray:
Holy God, Gracious God, grant us the heart of the Magi.
Hearts that desire the light.
Hearts that yearn to know where we can find your beloved Son, our Savior.
Hearts that are always ready to kneel before you.
Hearts that overflow with generosity.
Hearts that are prepared to move in new directions and travel a different way.
Hearts ready to be formed into the image of Christ for the sake of the world.
I pray this in the precious name of Jesus, whose coming we celebrate this Christmas. Amen.

Dear friends, I wish each of you and your families a most joyous Christmas and happy new year!

Bishop Bruce R. Ough is resident bishop of the Dakotas-Minnesota Area of The United Methodist Church.
Blogs/Columns
print this article